A landform created when material is deposited by the sea.

Coastal deposition is when the sea drops or deposits material. This can include sand, sediment and shingle. This results in the formation of landforms of coastal deposition.

The beach is the area between the lowest spring tide level and the point reached by the storm waves in the highest tides. Every beach is different but they are usually made up of material deposited on a wave-cut platform. Beaches are formed from sand, sand and shingle or pebbles. They can also be formed from mud and silt. 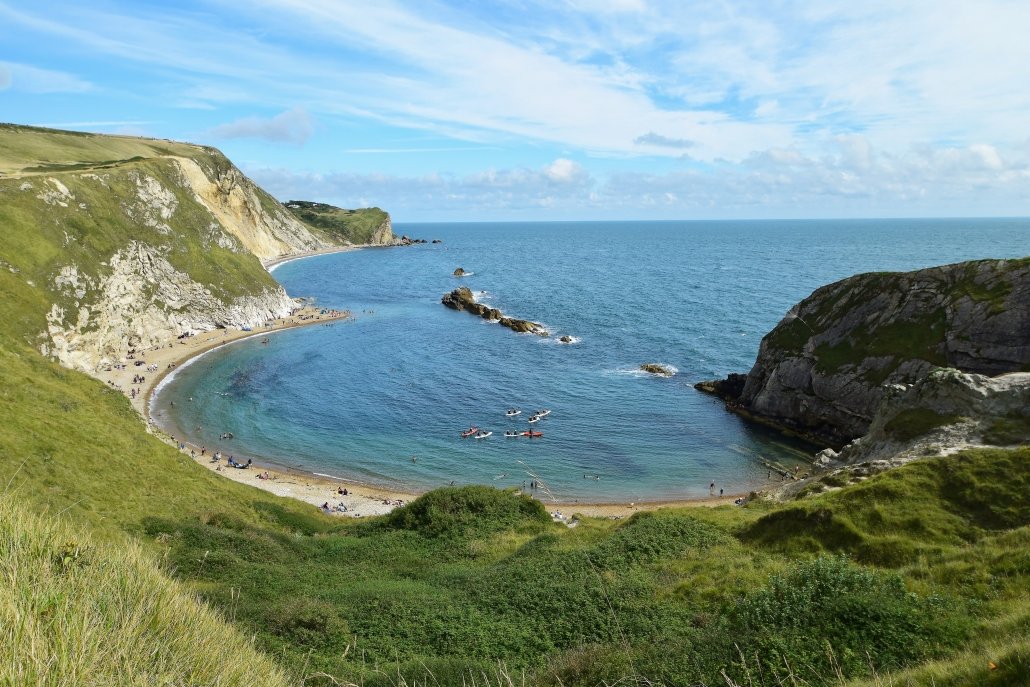 Exposed beaches such as West Bay, part of Chesil beach in Dorset, sometimes have a large fetch. The plunging nature of destructive waves, along with their stronger backwash, means that pebbles are not moved far up the beach, which makes the beach profile steep. 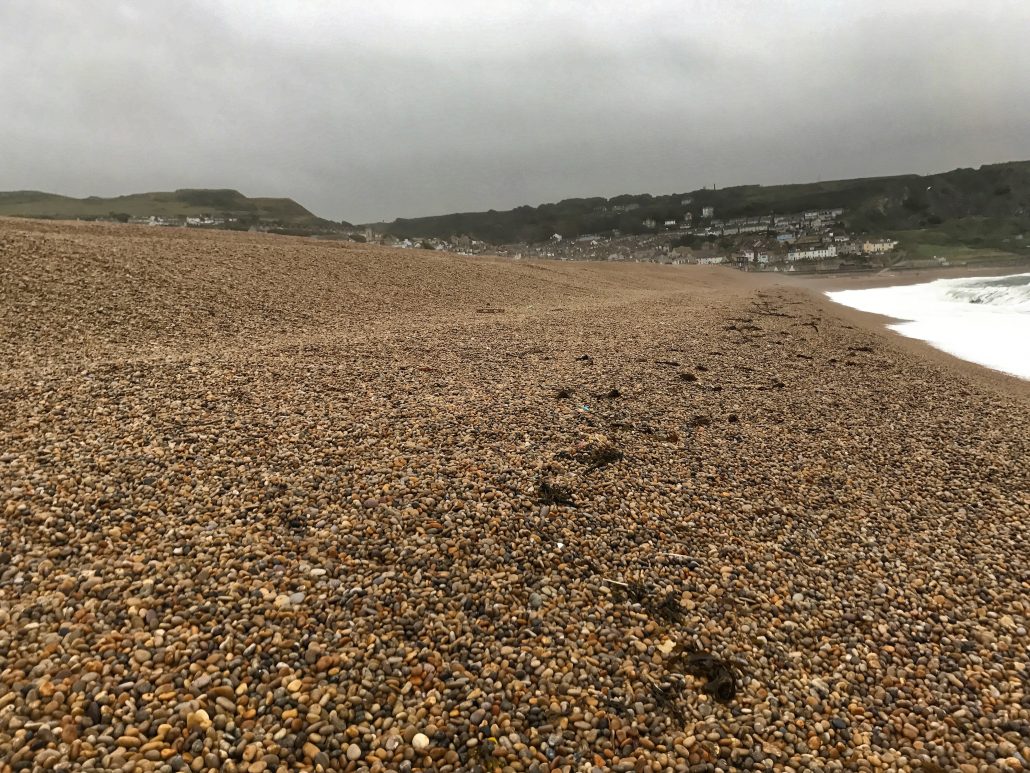 A storm beach may form when there is wild, stormy weather and waves hurl boulders and large pebbles to the back of a beach.

A beach profile shows the gradient of a beach from the back of the beach to the sea. A sandy beach generally has a more gentle profile compared to a pebble beach which has a steep, stepped profile. 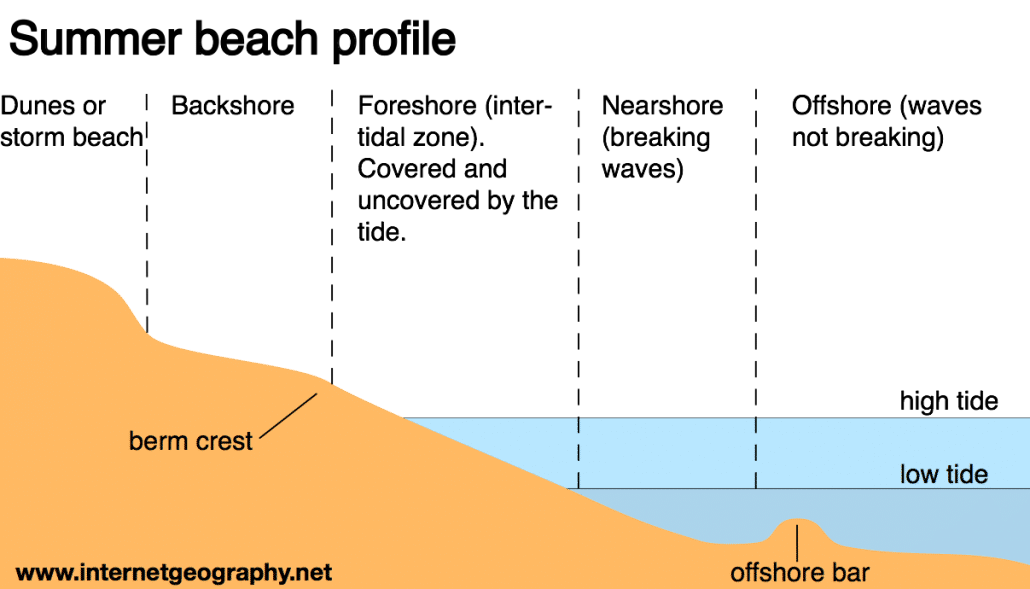 Sea defences also affect the profile of a beach. Where there are defences such as groynes, where the material is trapped, a beach tends to have a steeper profile.

A profile for a beach at Hornsea, Holderness Coast.

Ridge and runnels are common on wide sandy beaches with a large tidal range (big difference between high and low tide). Ridges are areas of the beach that are raised. The dips are water-filled troughs called runnels. The cross-section is similar to that of hills and valleys but at a much smaller scale. 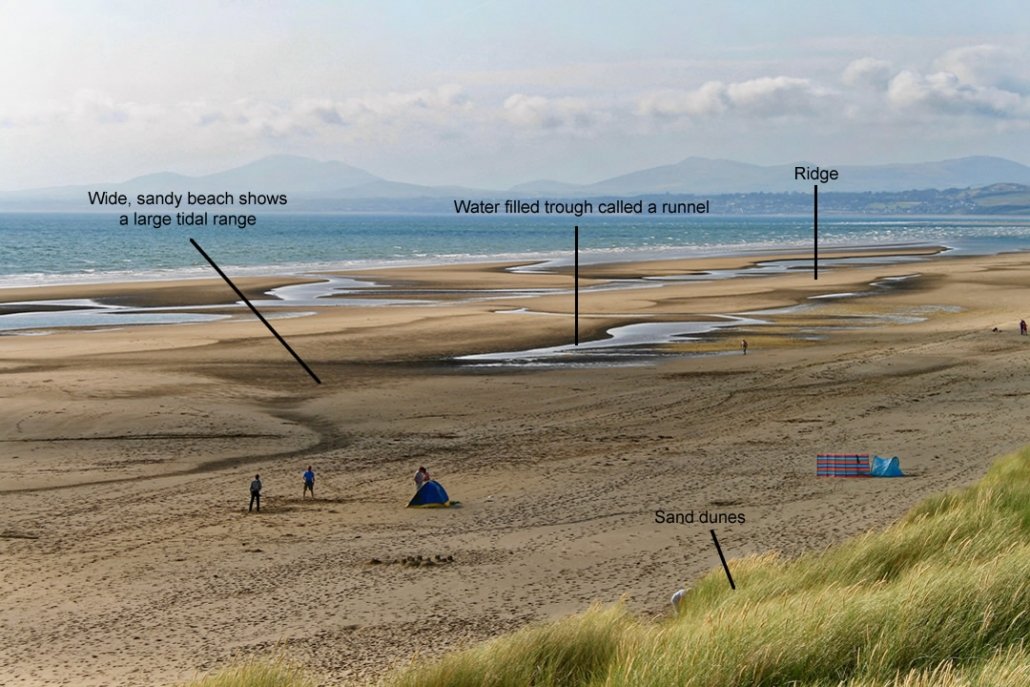 A spit is a landform of coastal deposition. It is an extended stretch of beach material that sticks out to sea and is joined to the mainland at one end. Longshore drift moves material along a coastline. Where the coastline changes direction or the power of the waves is reduced material being transported by the sea is deposited. Where rivers or estuaries meet the sea deposition often occurs. The sediment which is deposited usually builds up over the years to form a long ridge of material (usually sand or shingle). Such a ridge is called a spit. Spurn Point on the Holderness Coast is an example of a coastal spit as is Hurst Castle Spit.

A spit is an unstable landform. It will continue to grow until the water becomes too deep or until the material is removed faster than it is deposited. Spurn Point was breached by a storm surge in December 2013. Sand dunes were destroyed and the spit was breached by sea water. 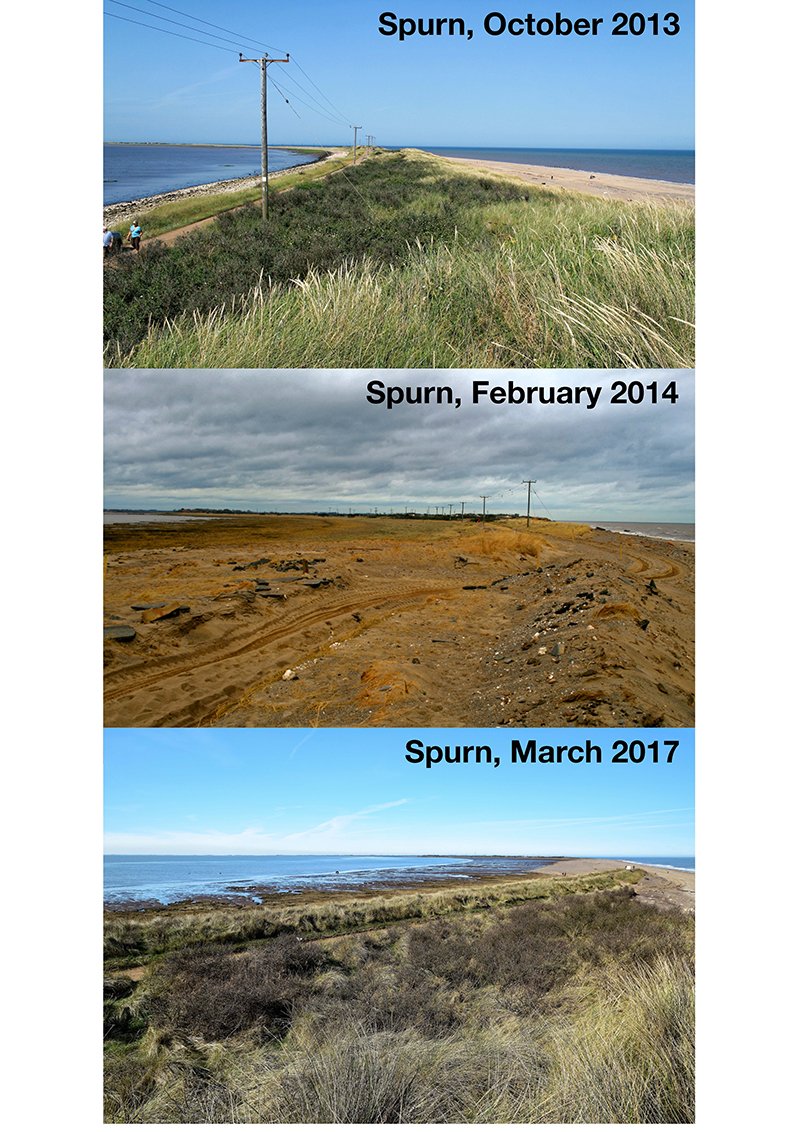 Where a coastline changes shape, the waves begin to lose energy so deposition occurs and the spit begins to grow out to sea. The prevailing wind makes the swash approach the shore at an angle. Backwash is at a right angle because of gravity.  Longshore drift moves material in a zig-zag manner along the beach. On a shingle or pebble spit the pebbles become smaller and more rounded towards the end of the spit due to attrition. They also become smaller as the longshore drift becomes weaker. 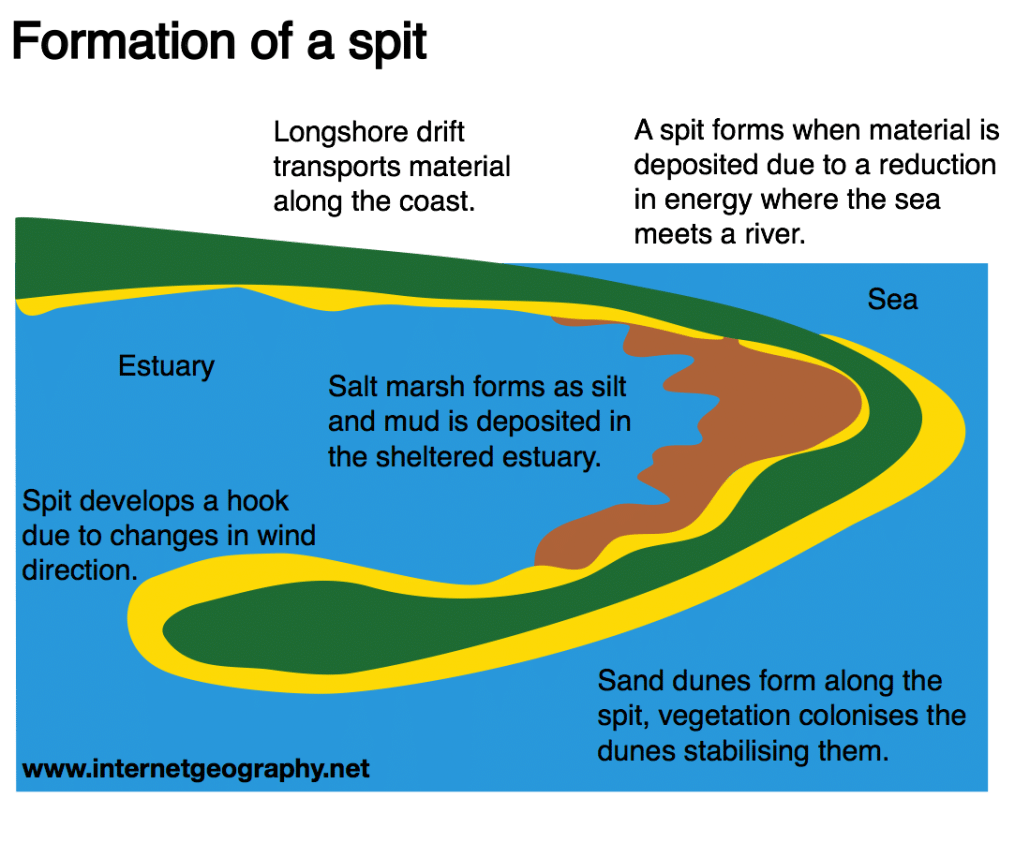 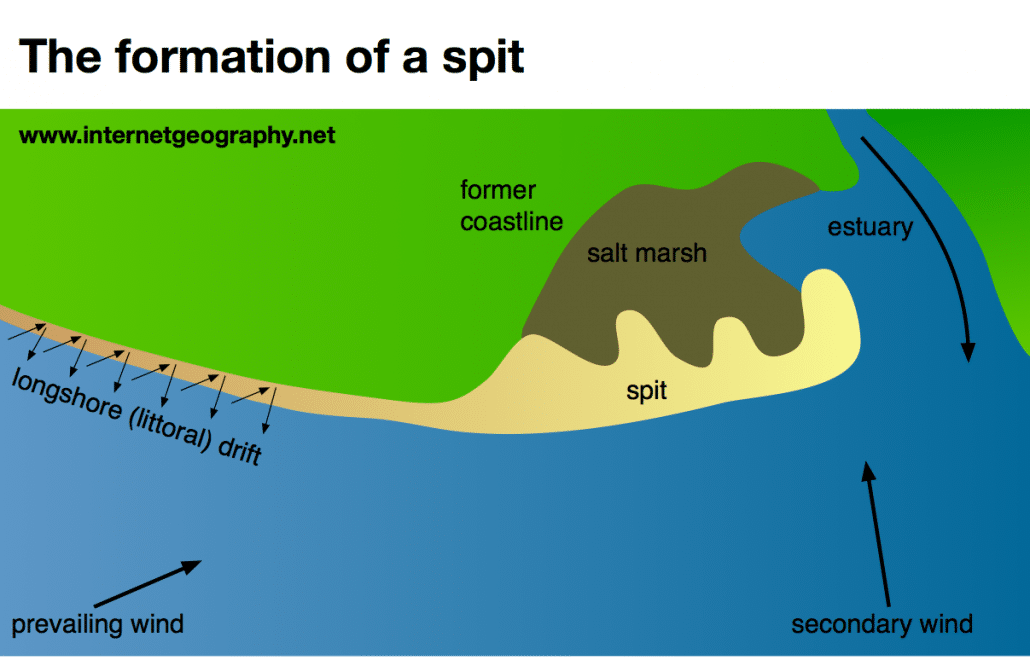 The video below shows Spurn Point, a coastal spit, located to the south of the Holderness Coast.

A bay bar is very similar to a spit. It is a ridge of sand or single that joins two headlands either side of a bay. It is formed due to longshore drift transporting sediment along the coastline. Behind the bar, a lagoon is created, where water has been trapped and the lagoon may gradually be infilled as a salt marsh develops due to it being a low energy zone, which encourages deposition. 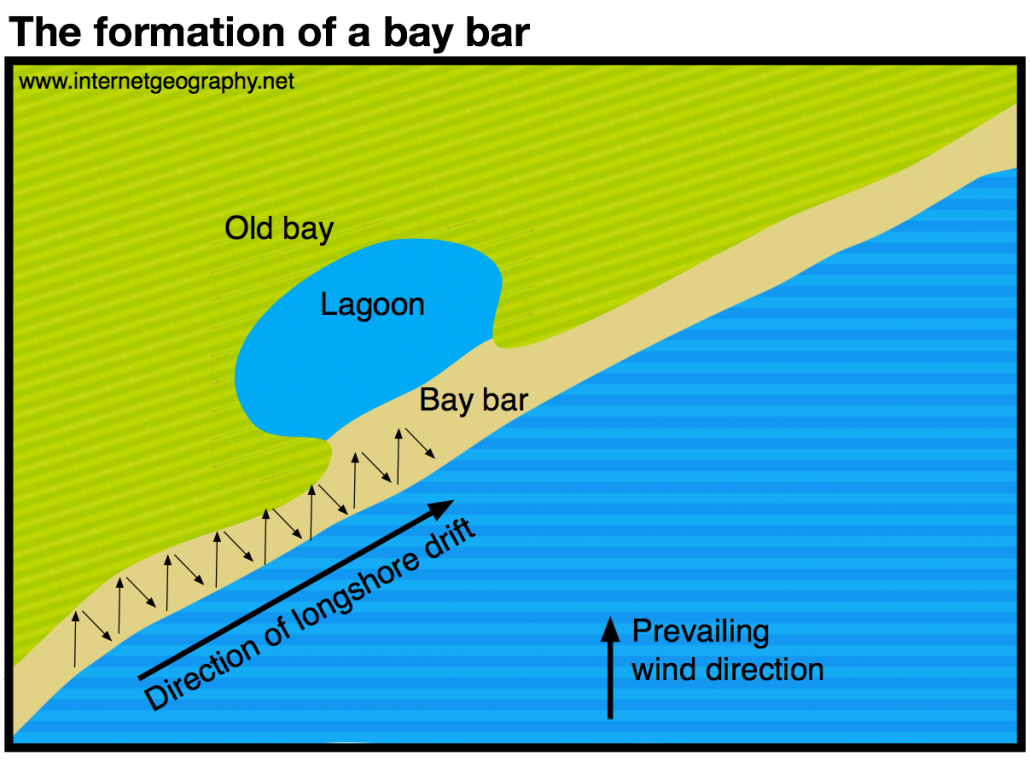 The formation of a bay bar

The video below shows a bar on the Cies Islands, Spain. The bar links two islands and features a lagoon.

Sand dunes are small ridges or hills of sand found at the top of a beach, above the reach of the waves. Onshore winds (winds blowing inland from the sea) cause the formation of sand dunes at the back of a beach. Sand is deposited by the wind around an object such as a rock, forming embryo dunes. Over time, vegetation such as marram grass stabilise the sand dunes forming foredunes. As the vegetation around the foredunes decomposes nutrients are released and soil begins to form. A wider range of plants are then able to colonise the dunes. Find out more about these landforms on the sand dunes page. 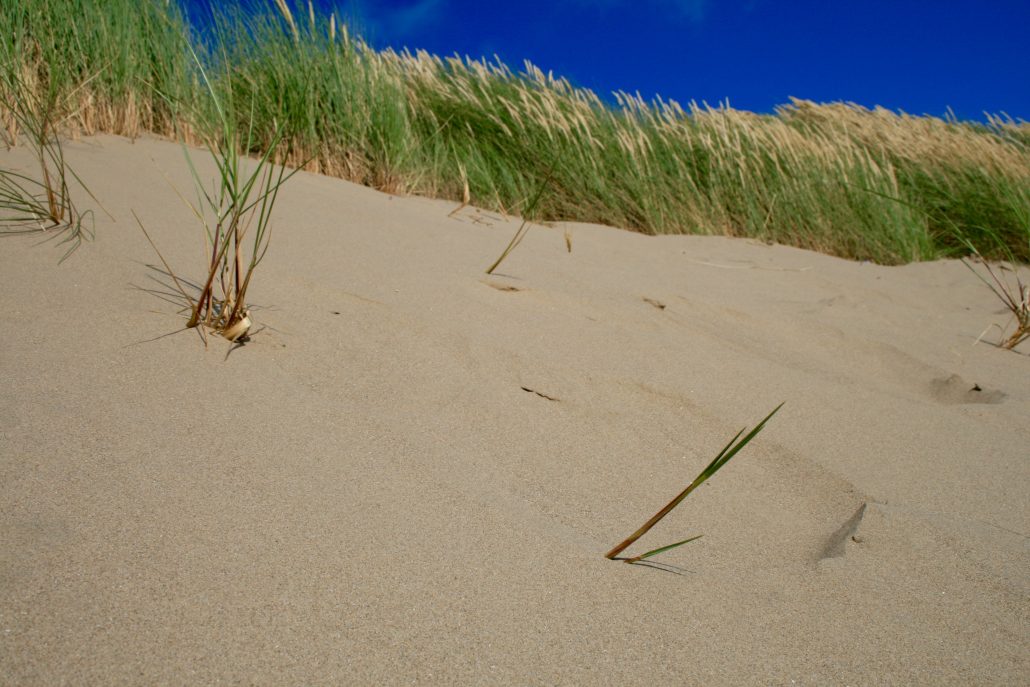 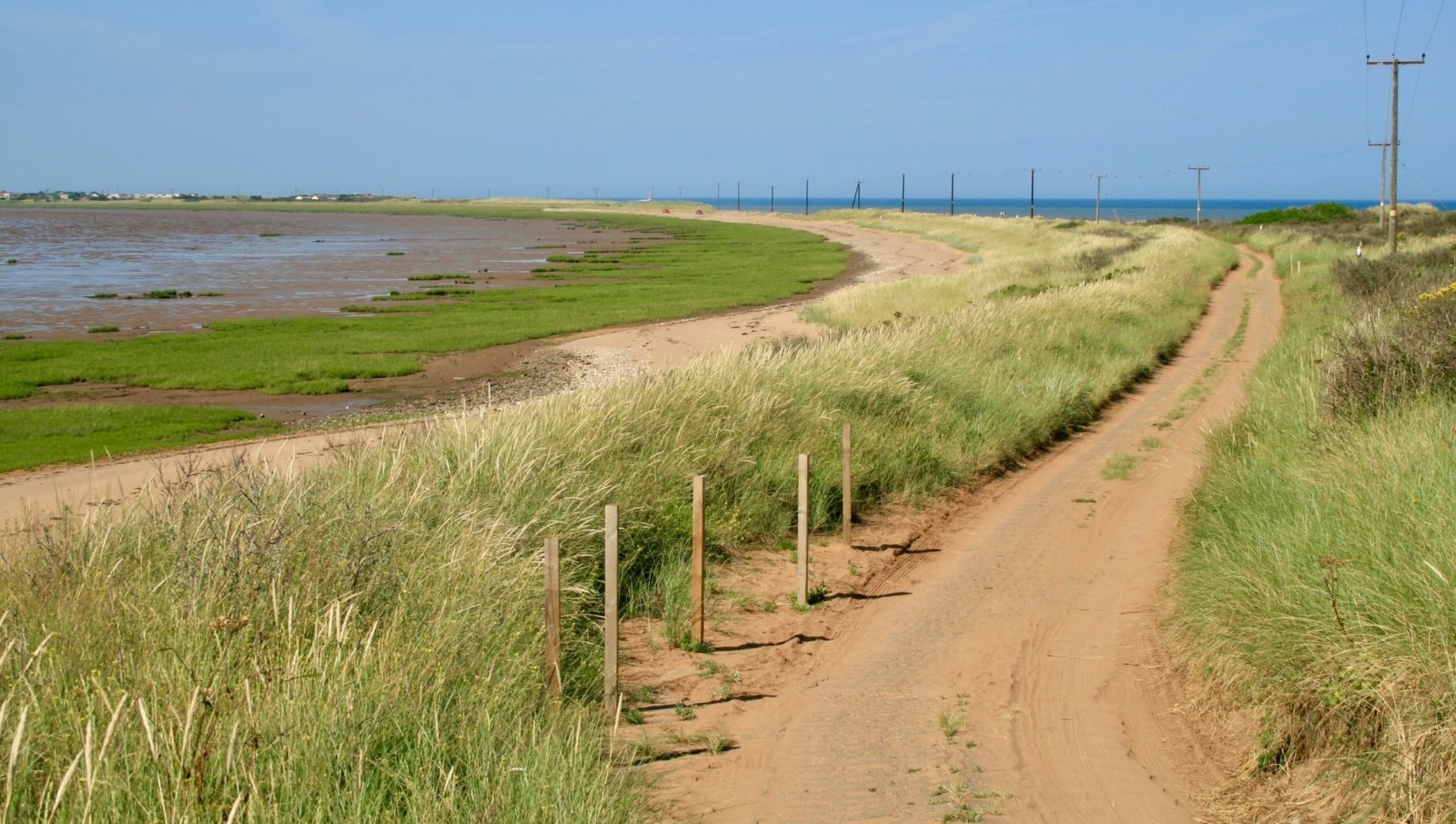 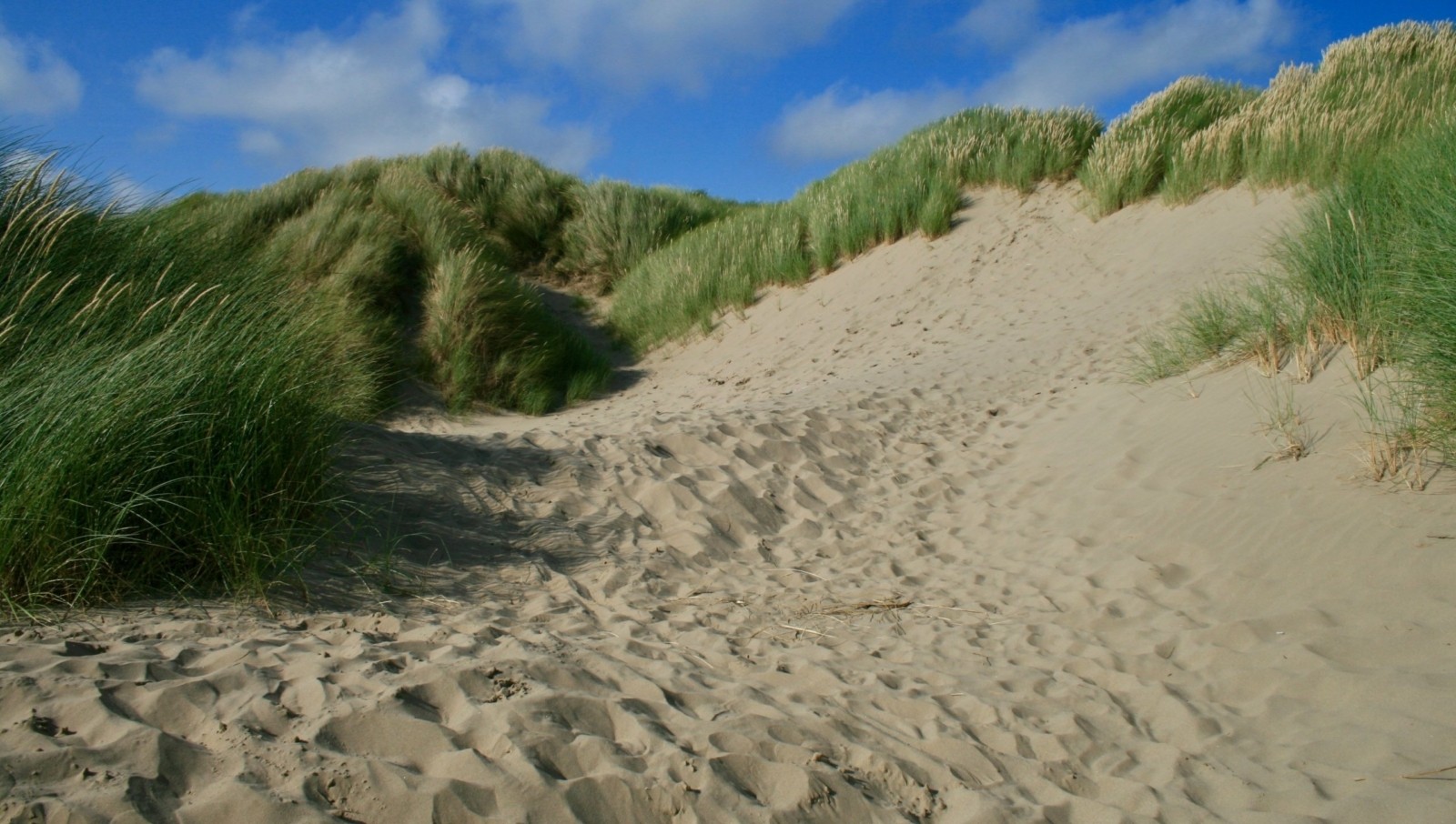 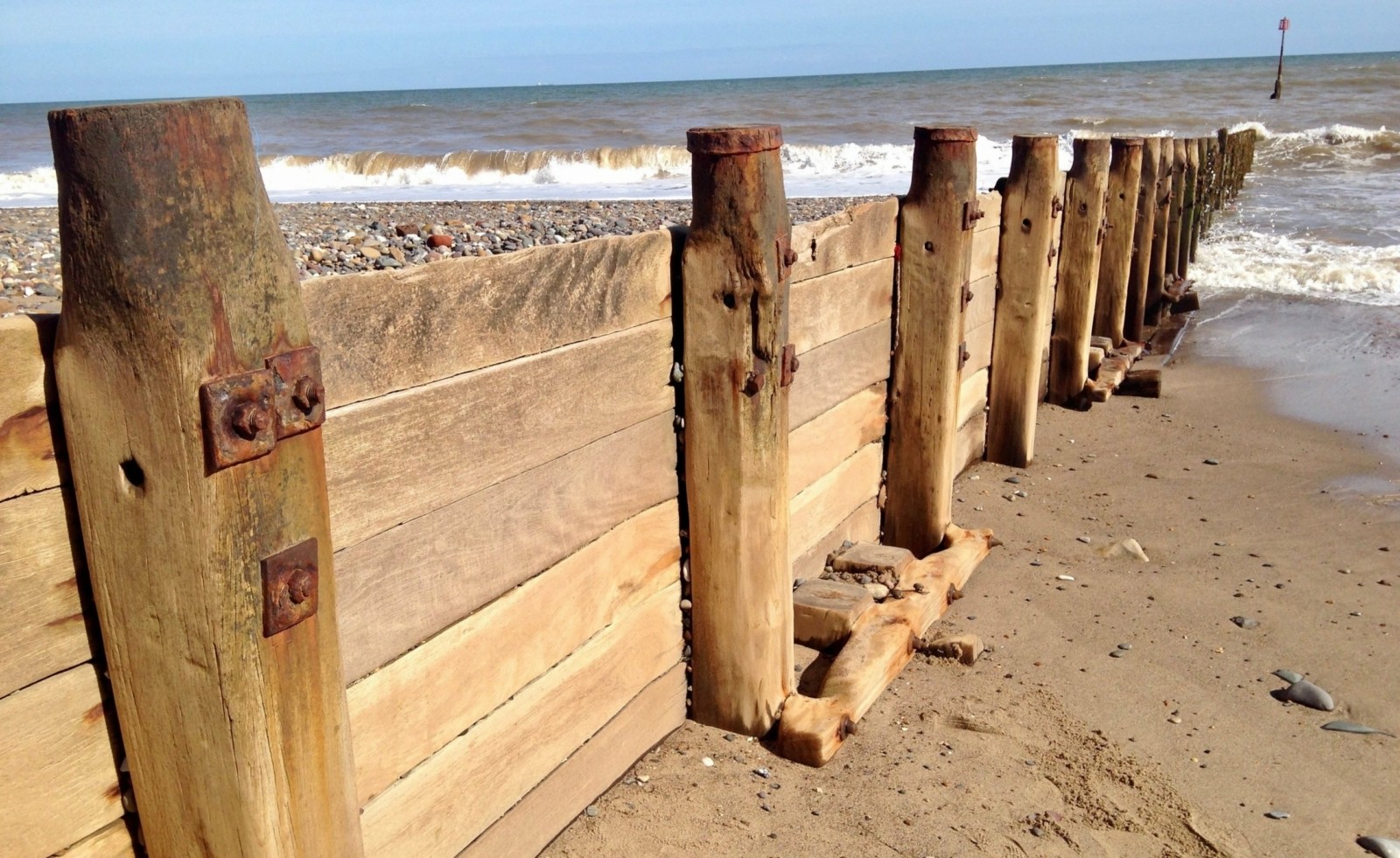