Freeze-Thaw
Most rocks are very hard. However, a very small amount of water can cause them to break. When water seeps into cracks and freezes it then expands. This powerful force can increase the size of cracks. Over time the repeated freeze-thaw action of water can break rocks apart. Eventually, pieces of rock break off creating scree.

The image below shows the impact of freeze-thaw on a rock in Iceland. 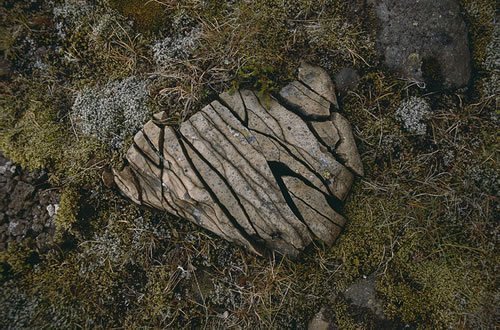 Exfoliation or Onion Skin Weathering
This type of erosion is common in warm areas. As the sun shines on rocks during the day it causes them to expand. During the night the rock contracts due to the colder temperature. Over time this continued process causes small pieces of surface rock to flake off.

The image below shows a close up of onion skin weathering. 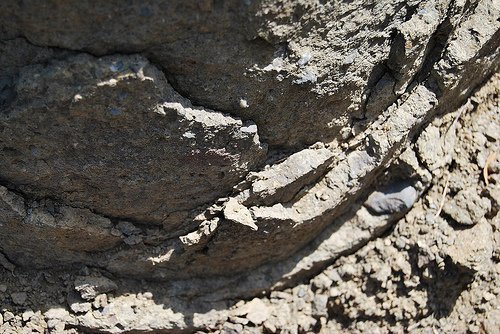 Chemical Weathering
Chemical weathering causes an alteration to the chemical composition of the rock due to a reaction. Water that is slightly acidic can dissolve rock. An example of this would be slightly acidic rain changing the chemical composition of limestone to form a limestone pavement. This occurs on the surface and along the joints and bedding planes of limestone. You can also see evidence of this on buildings made from limestone.

The image below shows limestone that has been chemically weathered. The resulting formation is known as a limestone pavement. You can find out more about these in the limestone area of the site. 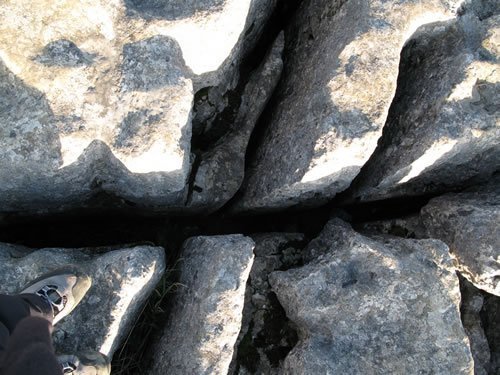 Evidence of chemical weathering on this area of limestone pavement

Biological Weathering
Biological weathering is the effect of living things. For example, as the roots of a tree extend into the ground they can prise rocks apart. Ivy growing up on the side of a building can cause bricks to loosen. It also occurs on a much smaller scale through lichen and moss.