The UK has four mainland-based ecosystems. These are:

The map below shows the distribution of ecosystems in the UK. 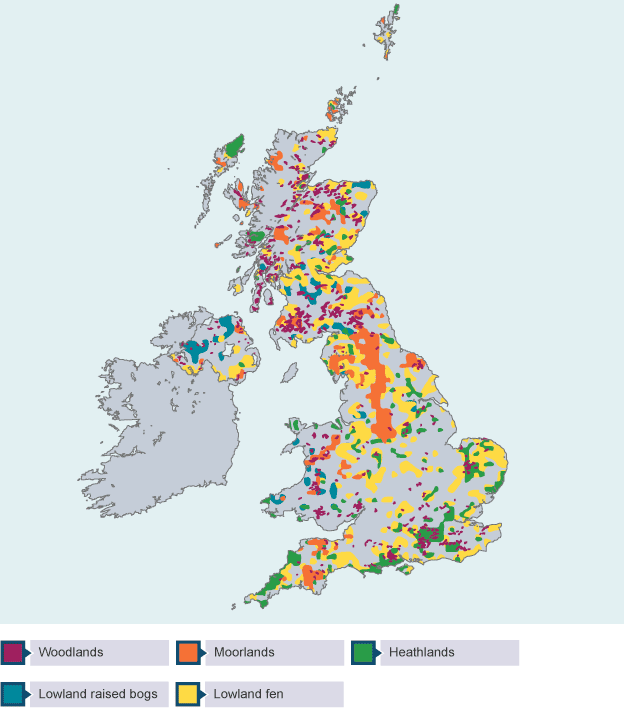 Heathlands are found in lowland areas, usually below 1000m. There are large areas of heath in the south of England, such as the New Forest and the Dorset Heaths.

Moorland is found in upland areas in Scotland, Wales and Northern England.

Heaths and moorlands are open landscapes with few trees and poor soils. High rainfall and acidic soils have a significant impact on the type of vegetation that grows in these areas. Heather, gorse and grasses thrive under these conditions.

Bogs can form on waterlogged, flat ground. Vegetation slowly decomposes, forming a layer of peat, a significant store of water and carbon.

Moorlands are found in upland areas whereas heaths are found in lowland areas, leading to a difference in the types of species that thrive in these areas. 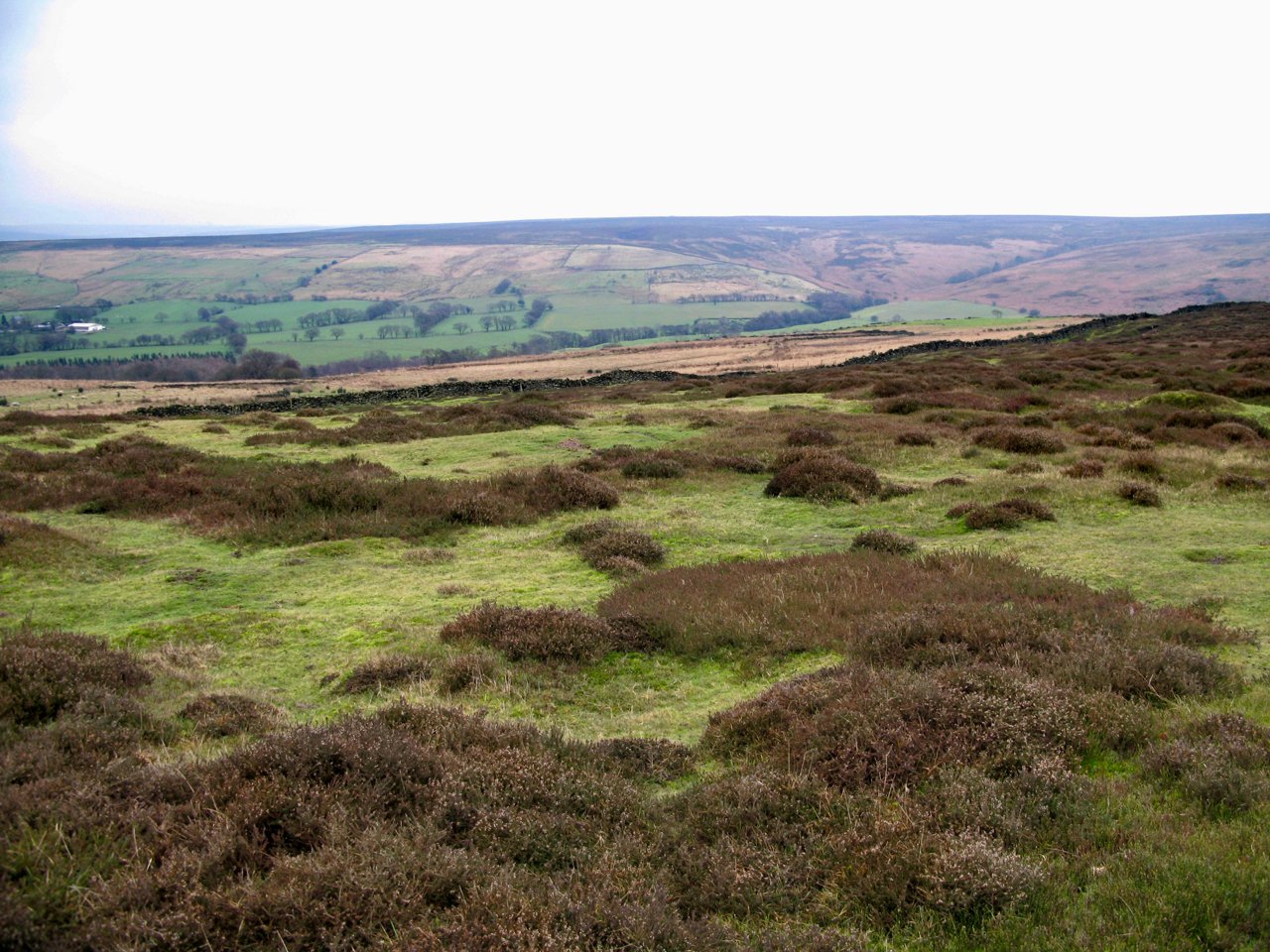 Heaths have dry, sandy soils (south and east of the UK) or wet and peaty (north and west of the UK). Heaths are home to some rare species of plants, such as the yellow centaury. Plants provide habitats for a range of insects, which are consumed by birds such as nightjars and rare lizards such as sand lizards.

Moorlands provide habitats for a range of animals and birds, including mountain hares and hen harriers. Most moorland areas are used for grazing sheep and raise grouse. Grouse eat young shoots of heather and nest in it. New growth is encouraged each year by burning the moorland.

Wetlands occur where the land is waterlogged for most of the year, e.g. bogs, fens and marshes. Places which flood seasonally are also examples of wetlands e.g. the Somerset Levels.

Water stops oxygen getting into the soil which means it is anaerobic. Only certain plants can grow in this kind of soil, such as reeds and mosses.

Vegetation decomposes very slowly in bogs and, over time, forms peat. Bogs have acid soils, however, marshes have alkaline or neutral soils.

Mammals and birds thrive in wetlands such as otters, water voles and snipe. Wetlands also provide the ideal breeding conditions for insects that fly, such as dragonflies. These insects are consumed by other animals such as bats.

Most native woodlands in the UK are deciduous, which means the trees lose their leaves in the Autumn. Examples of native trees to the UK include oak, ash and beech. 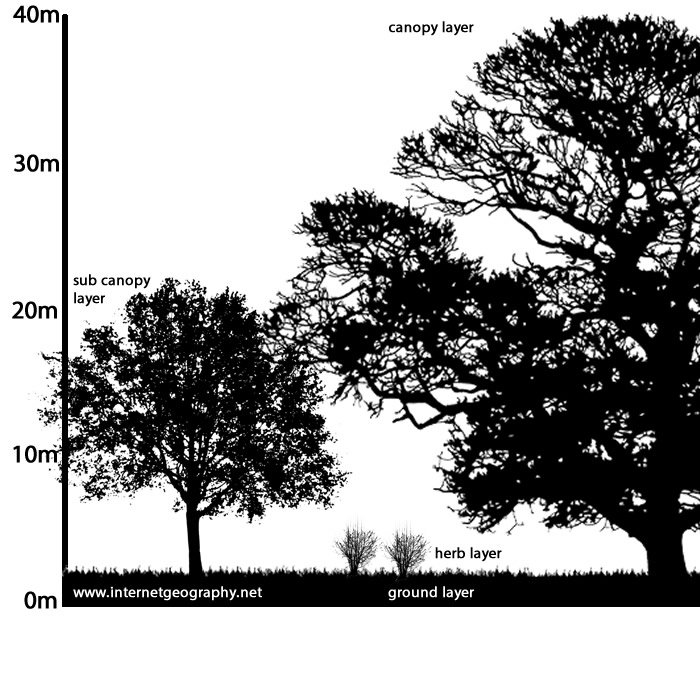 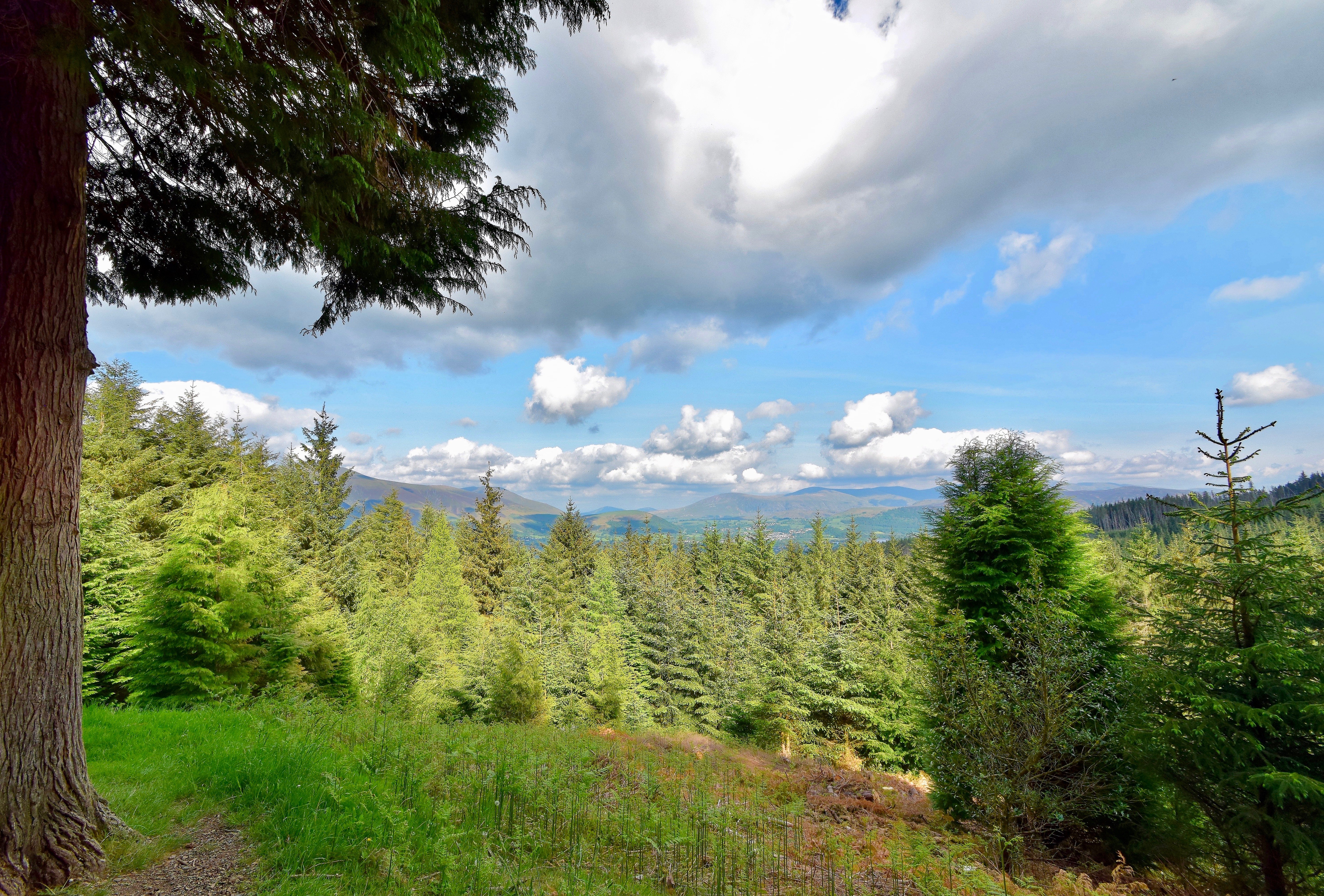 A coniferous forest in The Lake District

Woodlands in the UK are home to a diverse range of species of animals including foxes, badgers and grey squirrel.  They also provide habitats for birds such as owls and woodpeckers.

The UK has a number of important marine ecosystems, including salt marshes, estuaries and cold-water coral reefs. These ecosystems provide a range of resources.

Recreation
There are many different recreational opportunities in coastal marine ecosystems including swimming, surfing, boating and diving. Tourism brings a range of economic opportunities around the coast providing an income to many thousands of people.

Energy
Deep-sea oil platforms, particularly in the North Sea, provide energy resources for the UK. Natural gas is also extracted from beneath the seas around the UK. Renewable energy is increasingly being generated around the coast of the UK, through wave, wind and tidal energy. The world’s largest operational offshore wind farm, Walney, is located off the coast of Cumbria.

Fishing
Coastal waters around the UK are rich in marine life. Although much smaller than it once was the UK fishing industry employs many people.

Impact of humans on marine ecosystems in the UK

Run-off from farming leads to eutrophication. This is when nutrients enter marine ecosystems, leading to the excessive growth of algae. This reduces the supply of oxygen and light to the seabed, destroying marine ecosystems.

Plastic waste is increasingly becoming a problem in marine ecosystems. Sealife and sea bird consume plastic, believing it to be food. The plastic takes up room in their stomachs, sometimes causing starvation.

Dredging to create fishing routes destroys marine ecosystems as important nutrients are removed from the seabed. Seabed plants are also damaged, reducing the availability of food for aquatic organisms.

The seafloor can also be damaged by the construction of energy infrastructure including oil platforms and wind farms.

Demand for wild fish in the UK is greater than the supply. This has led to overfishing. Reduced fish stocks also have a detrimental impact on consumers such as seabirds and seals.

How do changes affect the balance of an ecosystem?