The pattern of world development has changed over time.

The pattern of economic development across the globe has significantly changed over time. There was a clear divide between the rich north and poor south. The Brandt Line was used to mark this divide. 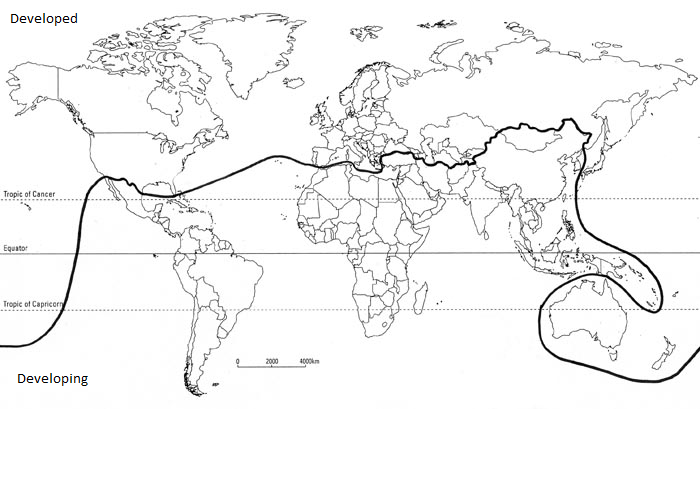 Considerable changes have occurred since the 1980s. For example, China is now the world’s largest economy. The GNI per capita of some European countries, e.g. Bulgaria and Hungary, is lower than Brazil. Countries that lie south of the Brandt line, such as Qatar, Singapore and Kuwait, have some of the highest incomes.

The World Bank classifies the world into three broad groups according to economic and social development measures. The classifications are high-income countries, newly emerging economies and low-income countries.

The map below shows the world in 2015. Most HICs lie in the northern hemisphere, with the exception of Australia and New Zealand. There are clusters of HICs in Western Europe, North America, the Middle East (including Saudi Arabia, Qatar and UAE) and East Asia (including Japan, South Korea and Singapore).

Country income groups according to the World Bank

The distribution pattern for NEEs and LICs is complicated and is constantly changing. Key features are:

• In South America, countries are NEEs

• There are more NEEs than LICs in Asia

• Africa has more LICs than NEEs

• Most Eastern European countries are NEEs, even some that are in the EU

How reliable are economic indicators of development?