There is a range of economic and environmental challenges and benefits to the different types of energy production.

Opportunities and challenges emerge when exploiting new or existing sources of energy. The impacts of developing or expanding the use of an energy source come with economic costs and environmental impacts.

What are the economic and environmental issues of different types of energy production?

There are some estimates that the Uk has enough coal to last between two to three hundred years. Rather than importing coal from other countries why not mine the coal that exists within the UK? The North Sea has provided a significant amount of oil and gas, why don’t we seek to explore new locations to find further reserves?

The UK produces around 18 per cent of its energy by nuclear power which is a fall from 25 per cent in the late 1990s. All nuclear energy plants were due to be decommissioned by 2023. However, new generation nuclear power plants will be built and commissioned by 2025. There are many people who see nuclear power as a clean form of energy production and that its use will help the UK meet its CO2 emissions targets. However, there are significant risks associated with nuclear energy production including storing or disposing of radioactive waste along with the risk of meltdown.

The use of renewable energy is seen as a significant solution to maintaining the supply of electricity in the future. Significant investment has been made in off-shore wind farms, off the Holderness Coast, for example. However, there are considerable concerns about the visual impact of wind farms. A recent application to construct an off-shore wind farm on the Dorset Coast was turned down as it is a World Heritage site. Wind farms need to be constructed in exposed locations to maximise their exposure to wind it causes conflict because these places often have a high scenic value.

Jobs are created in supporting industries providing equipment. This brings jobs and money into the area and is known as the multiplier effect.

The remaining coal in the UK is mostly deep underground in hard to reach areas. This makes it much more expensive to mine.

The UK has to import coal from other countries as its last mine closed in 2015.

The environmental impact of coal mining is significant and therefore it is expensive to clean up.

In some areas, former coal mines have been built over. The collapse of tunnels has led to subsidence which has been expensive to repair.

Burning fossil fuels leads to the enhanced greenhouse effect. One impact of this is rising sea levels. It will be very expensive to protect coastal communities from flooding by building sea defences.

Opencast mines cause visual and noise pollution along with dust which affects wildlife and disturbs local people. They also take up vast areas of land.

Pollution and congestion can be caused by vehicles accessing the site.

Gas and oil terminals on the coast take up large areas of land and the construction of pipelines can be damaging to the environment. The image below shows the gas terminal to the north of Easington on the Holderness Coast.

Fossil fuels are very stable which means they pose little risk to the environment when stored.

The nuclear power industry creates a considerable number of jobs in research and development. Once power stations are constructed, they are viewed as cheap sources of energy.

The cost of constructing a nuclear power station is huge.

Nuclear waste must be stored safely for between 1,000 and 10,000 years to avoid contamination before the radioactivity of high-level waste decays to that of the originally mined ore.

If an accident occurs, like those that happened at Chernobyl or Fukushima, the release of radiation can have a devastating impact on the environment and people.

Many jobs have been created in research and development and the manufacture of wind turbines and solar energy panels. For example, Siemens has recently constructed a £160 million off-shore wind turbine factory at Green Port Hull, in Yorkshire, creating around 1000 jobs.

Set up costs for renewable sources of energy such as wind, tidal and solar is very expensive.

The visual impact can have a negative impact on tourism.

The production of energy from renewable energy sources such as wind and solar energy can be affected if the weather conditions are not right. This can lead to reduced profitability.

Wind turbines have proven to have a negative impact on bird migration patterns.

Roads constructed to access remote locations for wind turbines, such as those constructed in the Scottish Highlands, damage formerly untouched environments.

Carbon emissions associated with the development of renewable energy are much lower than fossil fuels.

Fracking: a new energy production issue in the UK

Fracking is increasingly being explored as a method of extracting gas that is trapped in rocks deep below the surface of the Earth. Fracking involves injecting a mixture of sand, water and chemicals at high pressure into a hole drilled into the rock causing the rock to split and release gas. This method of extraction has been used in the North Sea oil and gas fields for many years. 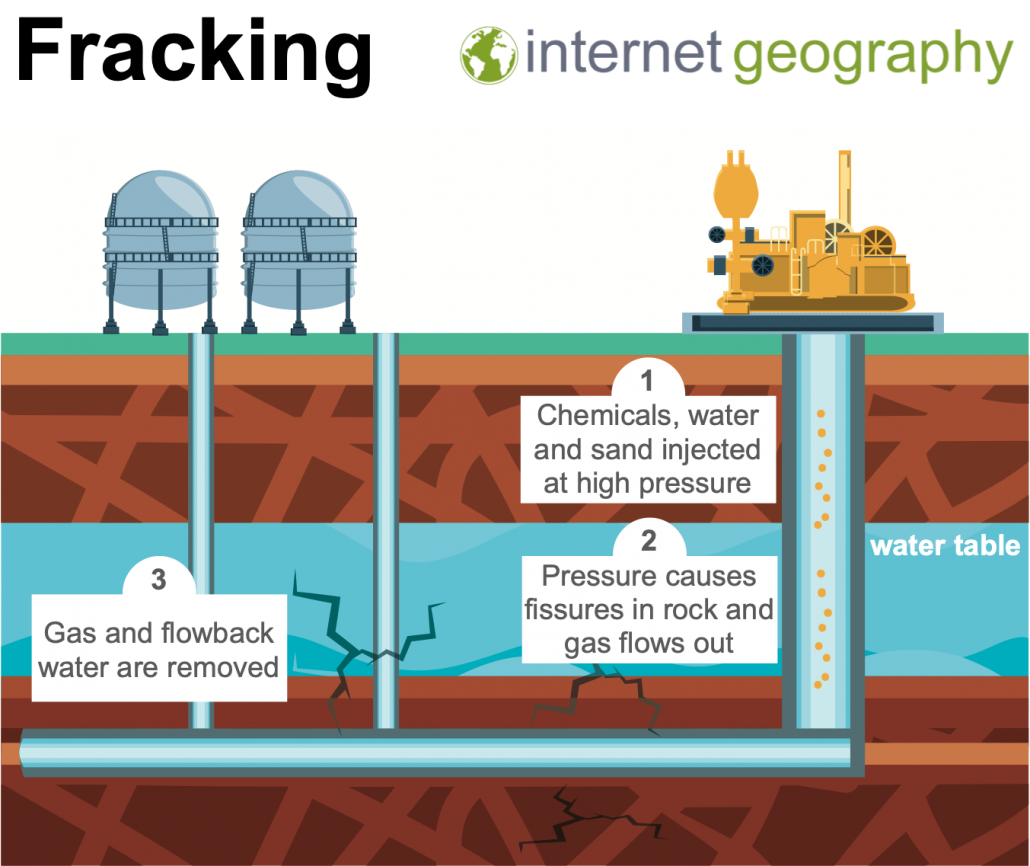 There are a number of areas where fracking is being considered. These include Yorkshire, Lancashire and the East Midlands.

The economic and environmental challenges and opportunities of fracking include:

Fracking can bring a number of economic benefits including: