Water pollution needs to be managed

Polluted or low-quality water reduces the amount available for use. This increases pressure on water resources, especially in areas where demand is greater than supply (water deficiency).

Although the quality of river water in the UK has increased significantly over time there was a decrease in the overall number of water bodies awarded high or good surface water status between 2011 and 2016.  In 2011, 37% of surface water bodies were assessed under the Water Framework Directive (WFD) in the UK as being in high or good status, falling to 35% in 2016; the indicator is therefore assessed as declining in the short term. 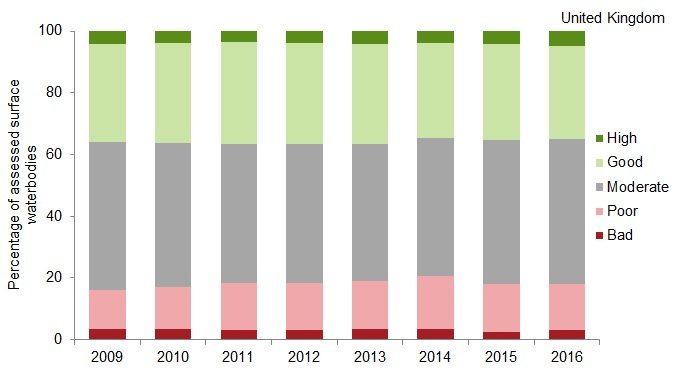 The main reasons for this are:

Nearly 50% of the groundwater used for public supply in the UK is affected by pollution. This has led to many sources being closed or has had to undergo expensive treatment to make them safe for public consumption.

There is a range of strategies in place to support improving quality. This includes introducing regulations on the amount and type of pesticides and fertilisers that can be used. Also, drainage systems are improved to slow the movement of rainwater to that pollution can be broken down in the soil.

How has the demand for water changed in the UK?

Matching supply and demand – areas of deficit and surplus