The cause, primary and secondary effects and immediate and long term responses to Cyclone Idai

Cyclones are tropical storms that occur in the Indian Ocean. Cyclone Idai is the strongest tropical cyclone on record to affect Africa and the Southern Hemisphere. 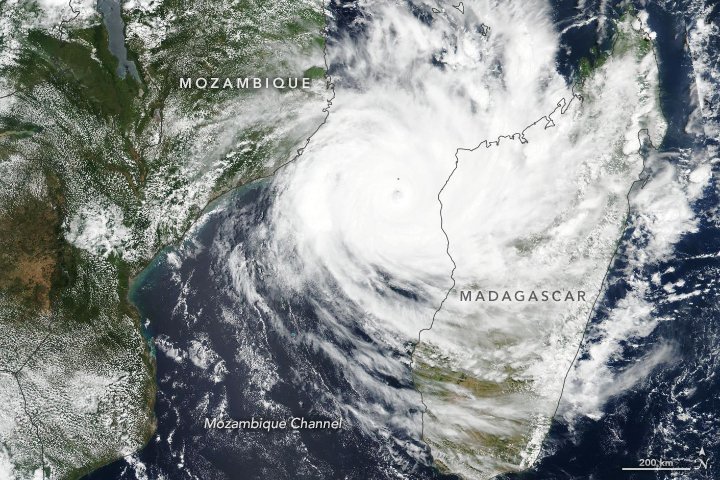 In early March 2019, a storm cell brought heavy rains to Malawi before heading out to sea off the coast of Mozambique. The storm intensified into Cyclone Idai and returned to land on the evening of 14th March 2019. Often, storms that develop there don’t strengthen as much as those that form north and east of Madagascar, but Cyclone Idai was fed by warm water temperatures. The storm, with winds of up to 115 mph/185 kph and more than 150mm of rain in 24 hours, wreaked havoc in the Mozambique port city of Beira, home to 500,000 people, along with surrounding districts. It then swept inland and on to Zimbabwe. The storm caused widespread devastation and the loss of life and livelihoods of hundreds of thousands more people. 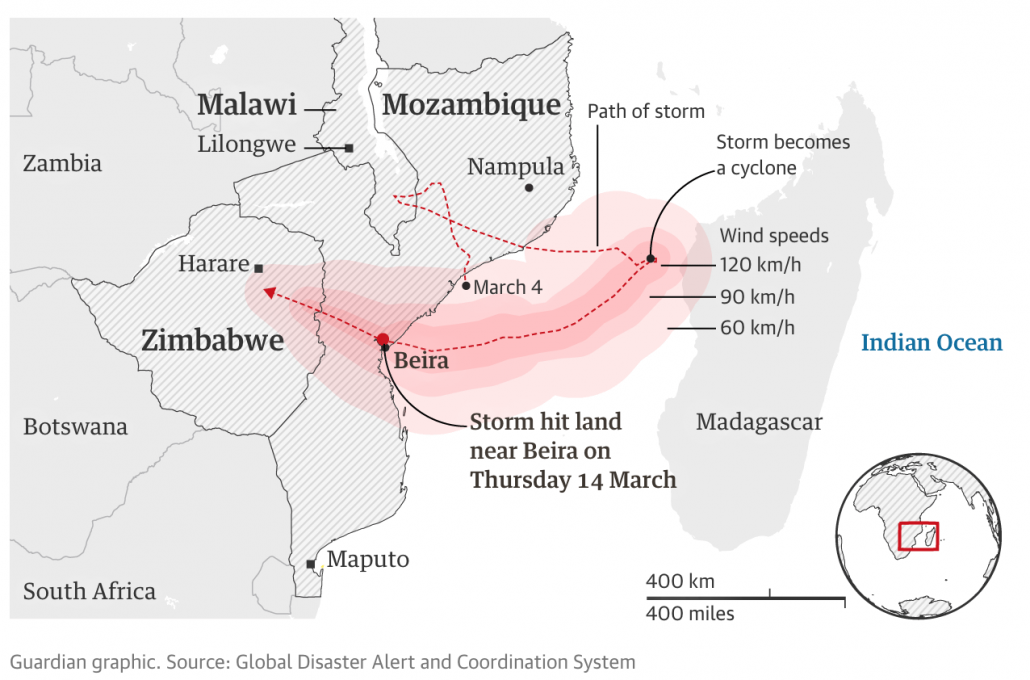 The location of Cyclone Idai

What were the effects?

Flooding in Southern Africa has affected nearly 3 million people in Mozambique, Malawi, and Zimbabwe since the rain began in early March and Cyclone Idai struck March 14 and 15. The death toll has exceeded 843 people, and many more remain missing. Over 1 million people were displaced by the storm.

It was not just heavy rainfall that led to flooding, storm surges between 3.5m to 4m hit the coastal city of Beira. The ocean floor along the coast by Mozambique is conducive to give storm surges.

The image below shows the area around Beira before and after the cyclone.

According to the Red Cross, up to 90% of Beira, Mozambique’s fourth largest city, has been damaged or destroyed. The devastated city became an island amid the flooded area with communications, power and clean water severely disrupted or non-existent. Houses, roads and crops disappeared beneath the water that was six metres (19ft) deep in places. Rescuers struggling to reach survivors who may have spent up to a week sheltering on roofs and in trees. A woman gave birth in a mango tree while escaping floods in central Mozambique.

The coastal lowlands, located between the higher plateau and the mountainous areas to the west near the Zimbabwean border were the hardest hit by the floods.

At least 180 people in Zimbabwe known to have been killed by landslides triggered by Idai. Nasa satellite images depict the extensive landslide activity associated with Cyclone Idai. The landslides were partly caused by deforestation.

People were still being rescued a week and a half after the storm.

According to the World Bank the cyclone affected about 3 million people, damaging infrastructure and livelihoods. Unicef reported that over half of the 3 million people in urgent need of humanitarian help were children.

The UN World Food Programme (WFP) says that Cyclone Idai wiped out a whole year’s worth of crops across swathes of Mozambique, Malawi and Zimbabwe. At least 1 million acres of crops were destroyed.

The cyclone is expected to cost Malawi, Mozambique and Zimbabwe more than $2bn, the World Bank has said.

What was the immediate response?

As part of the forward planning for severe weather, safe zones had been created in rural areas of Mozambique for evacuation above the flood plain. However, the flooding was far worse than had been expected.

The meteorological office of Mozambique, Inam, issued weather alerts as the storm developed. The highest possible alert was raised by the government three days before the cyclone struck, telling people to evacuate threatened areas.

Some people were evacuated by boat before the cyclone struck, however many people in rural areas didn’t respond to the warnings or were not aware of them.

According to the mayor of the Mozambican city of Beira, the government failed to warn people in the areas worst hit by Cyclone Idai despite a “red alert” being issued two days before it struck.

The South African air force and the Indian army, which happened to have a ship in the area, drove the initial rescue effort. Opposition groups in Mozambique blamed the limited government preparation and response on corruption.

Last year, the government of Mozambique received support from international donors for a disaster fund of $18.3m (£13.9m) for 2018 and 2019. This is the main source of funding for any disaster response and is intended specifically for search and rescue within the first 72 hours.

More than 130,000 newly homeless people were taken into reception centres.

Two weeks after the disaster 900,000 doses of oral cholera vaccines arrived in the cyclone-battered Beira city, from the global stockpile for an emergency, according to the World Health Organisation (WHO).

As flood waters receded the International Committee of the Red Cross supported flood-affected communities to recover bodies, identify them and bury them in clearly marked graves.

The Mozambique government announced the search and rescue operation to find survivors from Cyclone Idai was over two weeks after the storm.

With the help of OpenStreetMap – an open-source mapping resource – thousands of volunteers worldwide digitised satellite imagery and created maps of the affected area to support ground workers. Through the Missing Maps Project, an army of arm-chair mappers has already mapped more than 200,000 buildings and nearly 17,000 km of roads in the affected areas.

A large number of international charities launched appeals to fund aid to support those affected by Cyclone Idai including The Red Cross, Unicef, DEC, CAFOD and MSF (Doctors Without Borders).

What was the long term response?

Two weeks after the storm the government of Mozambique announced a new phase in the recovery operation was beginning to help those affected and rebuild the education, health, energy, transport, industry and trade sectors, which were all devastated by the cyclone.

The UN has appealed for donations of $282m to fund emergency assistance for the next three months.