Lagos faces many challenges in the twenty-first century. Find out what these challenges are and the steps being taken to overcome them.

How can urban planning improve life in Lagos?

Urban planning in Lagos is incredibly challenging as its population increases by over 600,000 people each year. This is the equivalent of the population of Bristol being added each year! One solution is to take advantage of the vast area of water that surrounds Lagos by creating new floating communities. Already squatter settlements like Makoko are built on stilts on the edge of Lagos Lagoon.

In 2014 a prototype floating school called the Makoko Floating School was built. It had classrooms that could hold 60 children at a time. It was also used as a community centre when not being used for lessons. The Makoko floating school comprised of alternative sustainable buildings and structures designed to adapt to the resident communities’ aquatic lifestyle. The floating school utilised local materials such as bamboo, timber and resources to produce architecture that applies to the physical, social needs of people and reflects the culture of the community. Wood was used as the major material for the structure, support and finishing of the school building. The form of the school building is a triangular A-Frame section with about 1,000-square-foot play area. 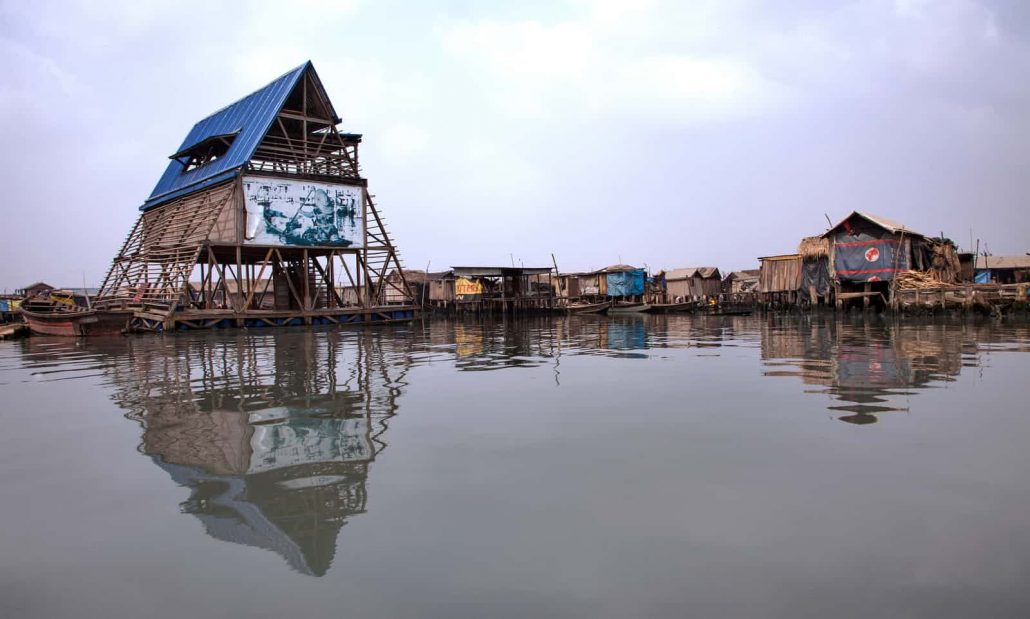 In 2016 the building collapsed due to heavy rain. No one was injured as the students and teachers were relocated 3 months earlier due to safety concerns. The school has been replaced by a new floating school.

How can planning also have environmental benefits?

The floating school provides a prototype for developing similar structures to house people in Makoko and other communities in the future. The design is environmentally sustainable and because it floats it could support communities when facing rising sea levels as the result of climate change.

What challenges does Lagos face in the twenty-first century?

Lagos faces a considerable number of challenges in the future. These include:

• Population growth – By 2035 the population is predicted to reach 40 million. If this is the case it will be one of the world’s top three megacities;

• Population density – Lagos is already four times more crowded than London. There is a finite amount of space for its population;

• Rising sea level – By the end of the twenty-first century, the sea is expected to rise by around one metre. This is a threat to low-lying Lagos;

• Water supply – Although Lagos receives tropical levels of rainfall, 2000mm per year, the city lacks the infrastructure to deliver safe, clean and affordable water to its population;

• Power supply – The supply of electricity in Lagos is very unreliable. While wealthy residents have their own generators, the poor have to use other forms of energy.