A country which is under-populated – Australia

Australia has one of the lowest population densities in the world. With a low population of 23 million and a land area of over 7.6 million km² its density is around 3 people per km². This is very low compared to the Monoco, the most densely populated area in the world with 26150 people per km².

Australia is rich in natural resources with large reserves of natural gas, oil, gold, uranium and metal ores. Uranium is important in the development of nuclear power around the world. Australia attracts migrant workers to support the exploitation of these natural resources. Australia has the 9th highest immigrant population in the world with 6.7 million, which makes up 28.2% of its population. 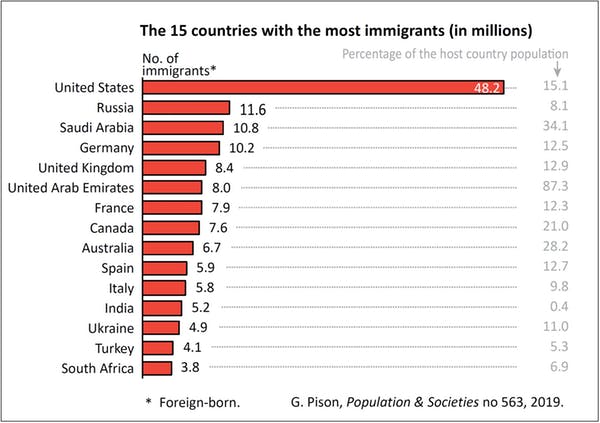 The 15 countries with the most immigrants – Gilles Pison, based on United Nations data

Australia has more resources available than it uses, which means surplus resources can be exported. Exports in 2017 we worth over $220 billion. This contributes to Australia’s high GDP per capita of over $49,000 per person. The unemployment rate in Australia is very low.

With low birth and death rates, Australia’s natural increase is low. Health care provision is very good which contributes towards the low infant mortality rates. Adult literacy is high at 99%.

Population density is higher around the coast where climates are more favourable. Moving inland the land becomes desert and semi-desert. Semi-desert areas could be developed for future population growth. However, water shortages could limit population growth and development in the future.

A country which is over-populated – Bangladesh