Eyjafjallajokull is a volcano located in Iceland. The name is a description of the volcano with Eyja meaning island; fjalla meaning mountain; and jokull meaning glacier. You can find out how to pronounce Eyjafjallajokull on the BBC website.

Eyjafjallajökull consists of a volcano completely covered by an ice cap. The ice cap covers an area of about 100 square kilometres (39 sq mi), feeding many outlet glaciers. 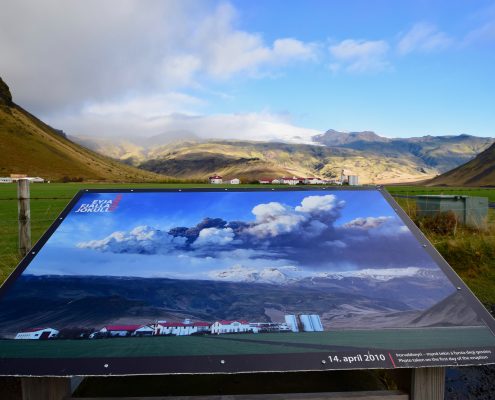 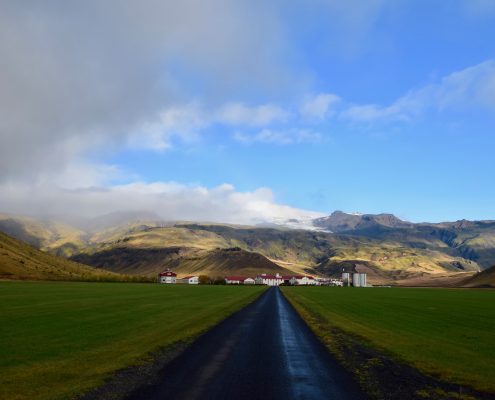 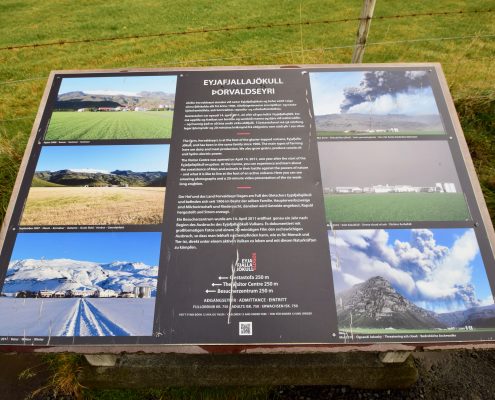 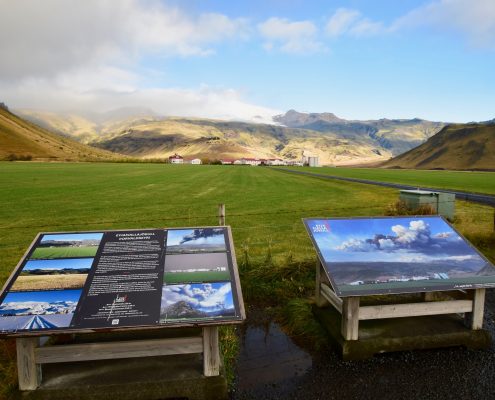 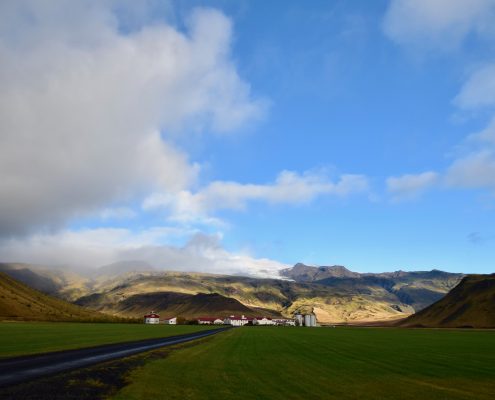 What type of volcano is Eyjafjallajokull?

When did Eyjafjallajokull erupt?

Eyjafjallajokull erupted between March to May 2010.

Why did Eyjafjallajokull erupt?

Iceland lies on the Mid Atlantic Ridge, a constructive plate margin separating the North American Plate and the Eurasian plate. The two plates are moving apart due to ridge push along the Mid-Atlantic Ridge. As the plates move apart, magma fills the magma chamber below Eyjafjallajokull. Several magma chambers combined to produce a significant volume of magma below the volcano. Eyjafjallajokull is located below a glacier.

The Eyjafjallajökull volcano erupted in 920, 1612 and again from 1821 to 1823 when it caused a glacial lake outburst flood (or jökulhlaup). It erupted three times in 2010—on 20 March, April–May, and June. The March event forced a brief evacuation of around 500 local people. Still, the 14 April eruption was ten to twenty times more powerful and caused substantial disruption to air traffic across Europe. It caused the cancellation of thousands of flights across Europe and to Iceland.

How big was the eruption of Eyjafjallajokull?

The eruption was only three on the volcanic explosivity index (VEI). Around 15 eruptions on this scale usually happen each year in Iceland. However, in this case, a combination of a settled weather pattern with winds blowing towards Europe, very fine ash and a persistent eruption lasting 39 days magnified the impact of a relatively ordinary event. The eruptions in March were mainly lava eruptions. On 14 April, a new phase began, which was much more explosive. Violent eruptions belched huge quantities of ash into the atmosphere. 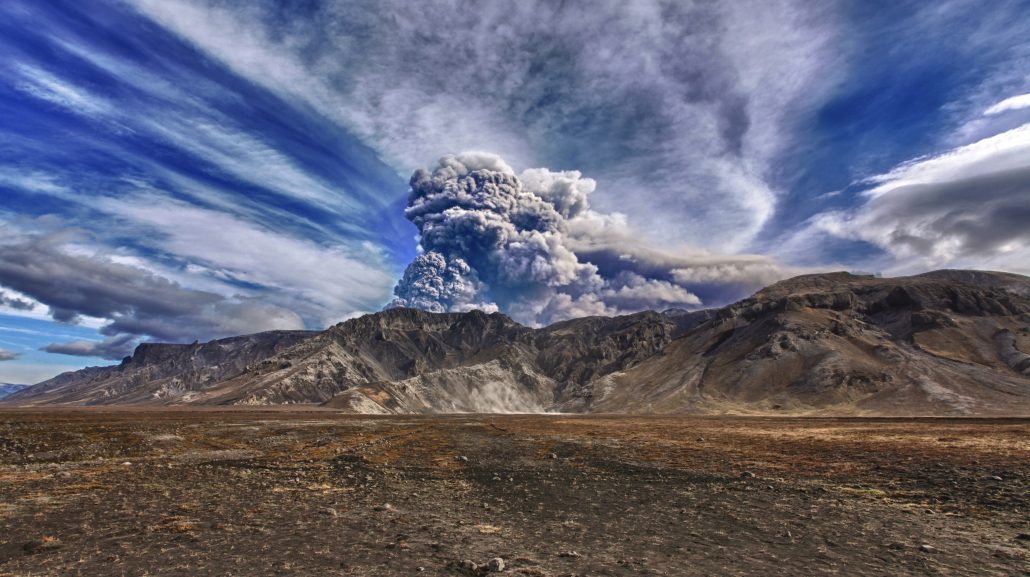 The eruption of Eyjafjallajokull

What were the impacts of the eruption? (social / economic / environmental – primary and secondary effects)

Primary effects: As the result of the eruption, day turned to night, with the ash blocking out the sun. Rescuers wore face masks to prevent them from choking on the clouds of ash.

Homes and roads were damaged and services disrupted, crops were destroyed by ash and roads washed away. The ash cloud brought European airspace to a standstill during the latter half of April 2010 and cost billions of euros in delays. During the eruption, a no-fly zone was imposed across much of Europe, that meant airlines were losing around £130m per day. The price of shares in major airlines dropped between 2.5-3.3% during the eruption. However, it should be noted that both imports and exports are being impacted across countries in Europe on the trade front, so the net trade position was not affected markedly overall.

Secondary effects: Sporting events were cancelled or affected due to cancelled flights. Fresh food imports stopped, and industries were affected by a lack of imported raw materials. Local water supplies were contaminated with fluoride. Flooding was caused as the glacier melted.

International Effects: The impact was felt as far afield as Kenya, where farmers have laid off 5000 workers after flowers and vegetables were left rotting at airports. Kenya’s flower council says the country lost $1.3m a day in lost shipments to Europe. Kenya exports typically up to 500 tonnes of flowers daily – 97% of which is delivered to Europe. Horticulture earned Kenya 71 billion shillings (£594m) in 2009 and is the country’s top foreign exchange earner. You can read more about this on the Guardian website.

What opportunities did the eruption of Eyjafjallajokull bring?

As passengers looked for other ways to travel than flying, many different transport companies benefited. There was a considerable increase in passenger numbers on Eurostar. It saw a rise of nearly a third, with 50,000 extra passengers travelling on their trains.

Ash from the Eyjafjallajökull volcano deposited dissolved iron into the North Atlantic, triggering a plankton bloom, driving an increase in biological productivity.

Following the negative publicity of the eruption, the Icelandic government launched a campaign to promote tourism. Inspired by Iceland was established with the strategic intent of depicting the country’s beauty, the friendliness of its people and the fact that it was very much open for business. As a result, tourist numbers increased significantly following the campaign, as shown in the graph below. 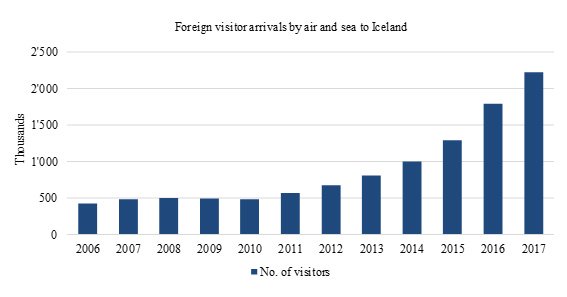 What was done to reduce the impact of the eruption of Eyjafjallajokull?

In the short term, the area around the volcano was evacuated.

European Red Cross Societies mobilised volunteers, staff and other resources to help people affected directly or indirectly by the eruption of the Eyjafjallajökull glacier volcano. The European Red Cross provided food for the farming population living in the vicinity of the glacier, as well as counselling and psychosocial support, in particular for traumatised children. Some 700 people were evacuated from the disaster zone three times in the past month. In one instance, people had to flee their homes in the middle of the night to escape from flash floods.

The European Union has developed an integrated structure for air traffic management. As a result, nine Functional Airspace Blocks (FABs) will replace the existing 27 areas. This means following a volcanic eruption in the future, areas of air space may be closed, reducing the risk of closing all European air space.