Rock types and the rock cycle

Rock types and the rock cycle

There are three main types of rock. These are sedimentary,  igneous and metamorphic. Rock types depend on how the rock was formed.

Igneous rocks are formed when molten rock from the Earth’s mantle cools and hardens. There are two types of Igneous rock.

The first is intrusive igneous rock. This is formed by magma, below the surface of the earth, slowly cooling and solidifying. Large, coarse crystals are formed. Large domes of cooled, igneous rock beneath the surface of the earth are known as batholiths. Where magma has flowed through vertical cracks, called joints, in bedrock it forms dykes and in horizontal gaps, it forms sills. Granite is an example of an intrusive igneous rock. 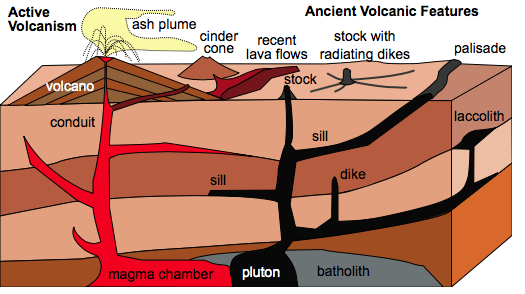 Rocks have a habit of recycling themselves. The rock cycle illustrates how sedimentary, igneous and metamorphic rocks are formed and how one type can change into another. This is shown in the diagram below.