The summer of 2018 will be remembered for being a scorcher! High temperatures and low rainfall are not the typical weather conditions the U.K. is used to. Summer 2018 is an example of extreme weather. Extreme weather is when a weather event is significantly different from the average or usual weather pattern.

Britain has experienced its longest heatwave in 42 years; just 47mm of rainfall fell between 1 June to 16 July. It is the driest summer on record since 1961 when modern records started. The Met office assessed the temperature data for the UK as a whole for summer 2018 and the figures are so close that they declared it as the joint hottest on record together with 2006, 2003 and 1976.

Impact of the heatwave

Satellite images illustrate the impact of the extreme weather Britain has experienced during summer 2018. The satellite images below comparing the U.K. in May and July clearly show the impact the heatwave and drought have had. Vegetation that was once green and lush turned a shade of brown. 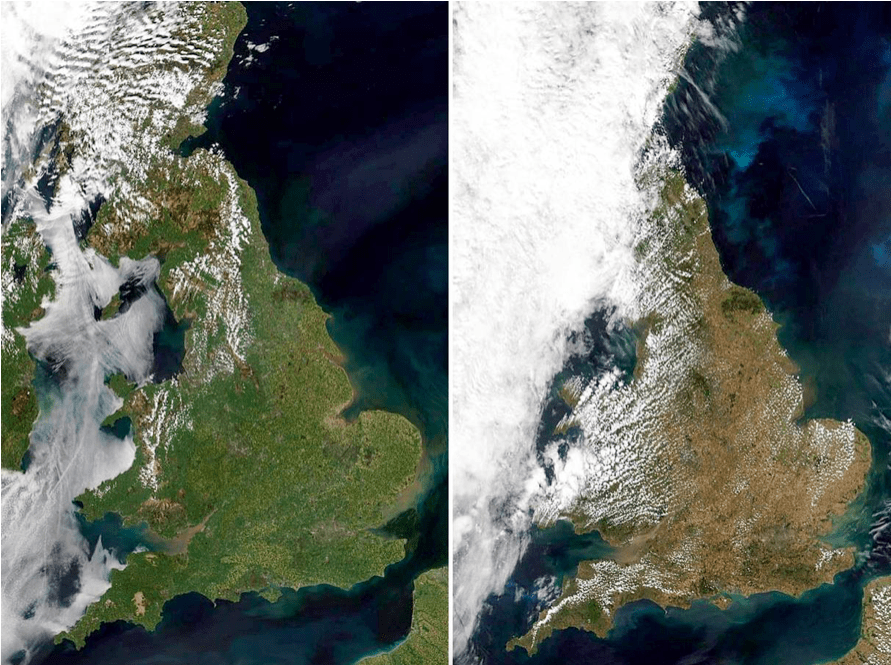 Satellite image showing Britain in May 2018 and July 2018 – Source independent.co.uk

The heatwave has led to falling water levels in reservoirs across the country. At Burrator reservoir in Dartmoor, Devon, a “drowned village” has been revealed having been submerged for more than a century. As the water in Burrator Reservoir dropped to beneath 50 per cent capacity, ruins of a wall were revealed, while a farmhouse and a bridge are thought to be beneath the surface.

7 million households in the north-west of England are facing the first hosepipe ban in the country since 2012. The ban is due to come into force on 5th August 2018 because reservoir levels are 17% lower than the same period last year. It is ironic that the wettest area in England is facing a hosepipe ban.

A hosepipe ban can reduce water usage by 5-10%, according to UK Water Industry Research, which in the north-west would amount to more than 100m litres a day. However, water leaks within the network typically result in a loss of 20% of our water.

In Northern Ireland, a hosepipe ban has been in effect since 29 June. An extra 175m litres of water is being pumped into the network in an effort to keep up with demand.

The dry conditions contributed to a series of large fires on the Lancashire moors. This included Winter Hill, near Bolton and Saddleworth Moor, close to Manchester. Up to 100 firefighters from across England tackled the blaze on Winter Hill.

The blaze on Saddleworth moor broke out on 24 June and about 100 soldiers were drafted in to help tackle it at its height. At its peak, the fire covered an area of 7 sq miles (18 sq km) of moorland. People living in the vicinity of the smoke plume were advised to keep their doors and windows shut.

The army joined firefighters on Saddleworth Moor where the blaze took three weeks to extinguish. It is thought the fires were caused by arson. However, the dry conditions exacerbated the fire.

More devastating news. On Saturday a fire on our Local Nature Reserve in St Anne’s destroyed approx 20% of the reserve’s habitat. The cause is unknown. Please don’t light bbqs on dry grassland, and dispose of all litter, particularly glass bottles & cigarette butts. pic.twitter.com/34MRCkfQR2

Nearly 700 more deaths than average were recorded during the 15-day peak of the heatwave in June and July in England and Wales, according to official statistics. Although these deaths cannot be directly linked to the heat wave this is more than a coincidence.

June saw 16 consecutive days of temperatures above 28°C. But joyous as it may seem, this unusually hot summer is no cause for celebration. @india_bourke on this summer’s warning signs. https://t.co/umQIsiplzO

Benefits of the heatwave

The hot, dry weather has brought benefits to the UK tourism industry. Holidaymakers already booked in for a summer break in the UK are the obvious and clear winners.

Last year saw a rise in the number of British people taking domestic holidays with more than 33 million trips taken between January and August – and two-thirds of Britons have planned a UK break for this year, the Association of British Travel Agents said.

The drought has exposed previously undiscovered or long-hidden outlines of various archaeological sites, from ancient fortifications to remnants of the Second World War, across the country.

How the current #heatwave is providing unprecedented opportunities for archaeologists https://t.co/SRRZVeJZwT (via @Independent) #archaeology

Retailers have benefitted from an increased sale of wine during the heatwave. Waitrose told Decanter.com that Champagne sales by volume were up by 49% year-on-year, with sparkling wines up 53% year-on-year.

Cause of the heatwave

The “beast from the east” cold of late winter 2018 and the dry heat of the UK’s summer so far, are both caused atmospheric blocking. Large meanders in the jet stream often lead to the development of huge anticyclones – areas of high pressure that can remain in the same place for weeks at a time. This causes cold temperatures during winter and hot, dry conditions during the summer.