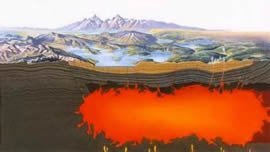 A supervolcano is any volcano capable of producing a volcanic eruption with an ejecta volume greater than 1,000 km3 (240 cu mi). This is thousands of times larger than normal volcanic eruptions. Supervolcanoes are on a much bigger scale than other volcanoes. Unlike composite volcanoes, with their steep sides, they are difficult to spot. They are typically depressions in the ground. The calderas are so large they can be seen from space. They have been identified in Indonesia, in New Zealand, in South America and an extinct one in Glen Coe in the UK.

Supervolcanoes can occur when magma in the mantle rises into the crust from a hotspot but is unable to break through the crust, and pressure builds in a large and growing magma pool until the crust is unable to contain the pressure (this is the case for the Yellowstone Caldera). They can also form at convergent plate boundaries (for example, Toba). Although there are only a handful of Quaternary supervolcanoes, supervolcanic eruptions typically cover huge areas with lava and volcanic ash and cause a long-lasting change to weather (such as the triggering of a small ice age) sufficient to threaten species with extinction.

What are the characteristics of a supervolcano?

Supervolcanoes are not mountains – they form DEPRESSIONS within the Earth’s crust. They begin with a column of magma rising through a vent into the Earth’s crust. The magma gets stuck and pools, melting the rock around for thousands of years. Over thousands of years the pressure builds up and when the eruption eventually happens it drains the magma lake and the land above collapse down over, creating a caldera.

What are the likely effects of supervolcanoes?

Supervolcanoes are eruptions and explosions of catastrophic proportions, on the Volcano Explosivity Index (VEI) supervolcanoes are an 8 on a scale that runs from 1 to 8. Each leap up the scale represents an increase of explosive scale of 10 times the power. Mount St Helens was VEI 5! It has been estimated that a major eruption of Yellowstone would result in at least 1m of ash being deposited across the UK! 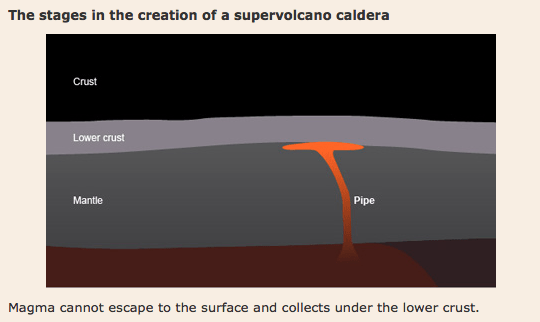 Stage 1 in the formation of a supervolcano 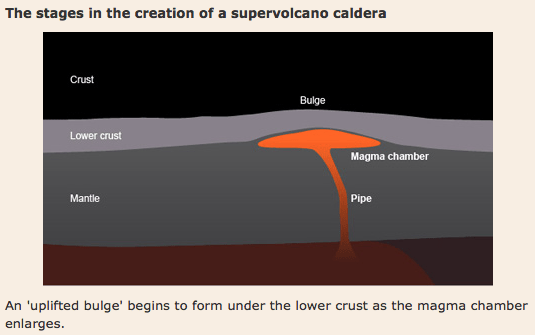 Stage 2 in the formation of a supervolcano 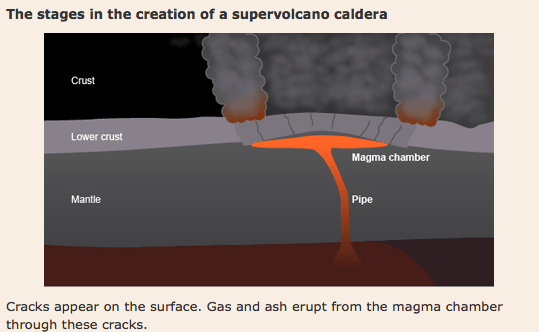 Stage 3 in the formation of a supervolcano 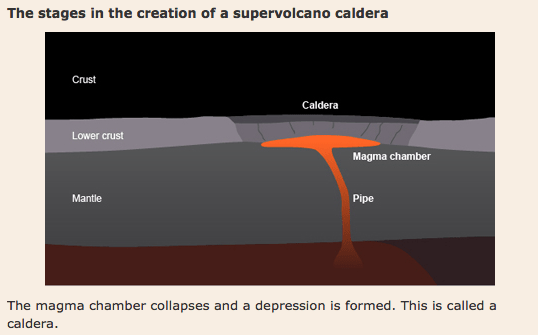 Stage 4 in the formation of a supervolcano