What caused the Sulawesi, Indonesian earthquake and what were the effects?

On Friday 28th September 2018 a magnitude 7.5 earthquake struck Palu, on the Indonesian island of Sulawesi, just before dusk wreaking havoc and destruction across the city and triggering a deadly tsunami on its coast. The 7.5 magnitude earthquake hit only six miles from the country’s coast. 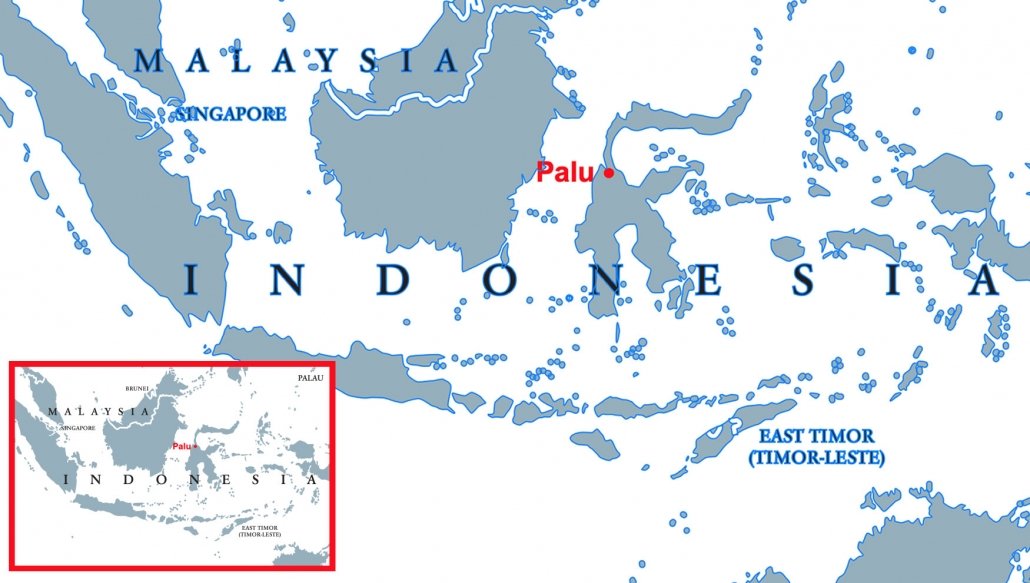 A map to show the location of Palu

The shallow tremor was more powerful than a series of earthquakes that killed hundreds on the Indonesian island of Lombok this July and August.

Palu is located on the Indonesian island of Sulawesi, 1,650 kilometres northeast of Jakarta, at the mouth of the Palu River. It is the capital of the province of Central Sulawesi, situated on a long, narrow bay.

Small foreshocks had been happening throughout 28th September in Palu. However, in the early evening, the Palu-Koru fault suddenly slipped, a short distance offshore and only 10km (6 miles) below the surface. This generated the 7.5 magnitude earthquake.

The impact of the earthquake was magnified because of the thick layers of sediment on which the city lies. Whereas bedrock shakes in an earthquake, sediment moves a lot more, behaving like a liquid. Poorly constructed houses cannot withstand movement of this magnitude.

Scientists don’t pay much attention to the Palu-Koru fault line, as far as tsunamis are concerned.  This is because the two plates are moving past each other, not with the vertical thrust required to form a tsunami.

Scientists are still trying to work out what happened to cause the tsunami. It is possible that the earthquake caused an underwater landslide which disturbed the water or there could be inaccuracies in the identification of the type of fault.

Once the wave started moving, Palu, at the end of a narrow 10km-long bay, was a sitting duck.

Tsunamis are no danger when out at sea. But when the waves come closer to land, their base drags on the seabed causing them to rise up.

The quake destroyed thousands of homes in the city, as well as an eight-storey hotel, hospital and a large department store.

More before/after comparisons from around the #PaluTsunami and #PaluEarthquake captured by @planetlabs. Included rough lat/long. Keep an eye on https://t.co/Kz73HlYmGF as they often post the sat. imagery for responders, relief agencies et al. pic.twitter.com/1Vreovjt9b

The earthquake caused widespread liquefaction, which is when soil and groundwater mix. The ground becomes very soft, similar to quicksand. It causes foundations of buildings and other structures to sink into the ground.

In the case of Palu, buildings not only collapsed but some were moved by the liquefaction. This is why it is better to build on bedrock rather than on top of the soil.

The control tower and runway at Palu’s airport also sustained damage. Commercial flights were cancelled with only humanitarian and search and rescue flights permitted.

The earthquake triggered a tsunami reaching 6 metres in height. As the tsunami approached the coast it was reported to be travelling 250mph. The damage was as extensive: the main highway was cut off by a landslide and a large bridge washed away by the tsunami wave, which hit Palu’s Talise beach and the coastal town of Donggala.

Landslides, downed communications networks and collapsed bridges have made it hard for aid workers and rescuers to reach rural areas.

Due to hospitals being damaged, people received medical treatment in the open.

Strong aftershocks hit the island the day after the earthquake.

A tsunami warning was issued by Indonesia’s geophysics agency (BMKG) when the earthquake was detected. However, the agency lifted the warning 34 minutes after it was first issued. The closest tidal sensor to Palu is around 200km (125 miles) away. The decision to lift the tsunami warning was based on this data.

Search and rescue teams were deployed to the worst-affected areas. Around 700 army and police officers were dispatched to assist in the emergency response.

The military sent cargo planes with aid from Jakarta and other cities. However, this was slow to arrive.

A large number of charities set up appeals to raise funds to support people in the affected area. Buckingham Palace reported that the Queen had made a donation to the Disasters Emergency Committee (DEC) appeal for survivors, which raised £6m in a day when it was launched.

The RAF delivered thousands of shelter kits, solar lanterns and water purifiers to the disaster zone in addition to trucks and power generators to help get them to where they are needed.

At least 70,000 people gathered in evacuation sites across the island.