Storm Ciara was a deep, Atlantic depression that affected the UK on Sunday 9th February 2020. Although the UK regularly experiences Atlantic depressions, what is unusual about Strom Ciara is that the large, deep area of low pressure covered the whole of the UK. At one point the storm delivered the strongest winds and biggest waves in the world.

#StormCiara currently delivering the strongest winds and biggest waves in the world! pic.twitter.com/dE7D1criuH

The storm coincided with a full moon, meaning coastal areas experienced a spring tide leading to over-topping, adding to the impact of Storm Ciara.

Hurricane-force winds and flooding caused severe disruption across much of the UK, including damage to hundreds of properties and the cancellation of trains, flights and ferries.

The Cause of Storm Ciara

The Impacts of Storm Ciara (Social, Economic and Environmental)

A man died after a tree fell on his car on the A33 in Hampshire. A second man died in Black Wood, Liverpool, when a branch fell on him.

Homes were flooded in a number of areas including:

The graph below shows the level of the River Calder at Mytholmroyd, West Yorkshire. At it’s peak it was over five metres. That’s one metre above the previous record.

In the UK as a whole about 118,000 people were without power as of 16:00 GMT. Energy companies said they had reconnected 421,000 customers since the storm hit and work is continuing to restore electricity to the remaining homes.

12,779 customers were without electricity in the East and West Midlands, the South-West and South Wales.

Over 3000 people were left without power in Scotland, in areas including Perthshire and Lockerbie.

Thousands of properties in Cumbria experienced several days with no water or low pressure, after supply was hit by Storm Ciara. A 100m (330ft) section of the water main between Kendal and Shap was damaged in Sunday’s storm.

A water supply issue in the Penrith area forced more than 20 schools to close. Police said the problem had been declared a major incident.

A severe flood warning for the River Nidd at Pateley Bridge was issued.

NEWS: There is a severe flood warning on the #Nidd at #PateleyBridge and #Bewerley.

A severe flood alert means there is a danger to life and this is the only one listed in the UK at present.

Residents had to be evacuated after a huge crane collapsed through the roof of an unoccupied block of flats on a building site. The London Fire Brigade evacuated 30 people from nearby flats in Stanmore, Harrow. No injuries were reported.

Crews pushed the car out of the water to safety during the rescue on the Lisnawery Road on Sunday morning.

Firefighters also had to protect 15 houses from flooding in Enniskillen and they rescued 12 sheep from floods in Dromore, County Tyrone.

The UK’s transport infrastructure experienced many issues, for example:

The strom also brought widespread flooding as the result of heavy rainfall. The economic impact of this is yet to be calculated.

High street shops were flooded in the market towns of Todmorden and Hebden Bridge in the Calder Valley, West Yorkshire. Flooding also occured in central York when the River Ouse burts its banks.

The front of Bridge House guest house in the Scottish Borders collapsed after its foundations were washed away in Storm Ciara.

Sporting events were cancelled around the country including Premier League fixtures.

Insurer Aviva published numbers around the effects of Storm Ciara. It said there had been a 285% increase in telephone calls and claims.The worst affected areas were Nottingham, Birmingham, Norwich, Sheffield and Bradford. “The majority of claims have been from people whose properties have been affected by strong winds, such as loose roof tiles, broken windows and fallen trees, but we are also starting to see flood claims,” reported Andrew Morrish, UK claims director for Aviva.

The storm dumped up to 1ft (0.3m) of sand along the seafront at Bournemouth in Dorset.

Warnings were issued by the Met Office. 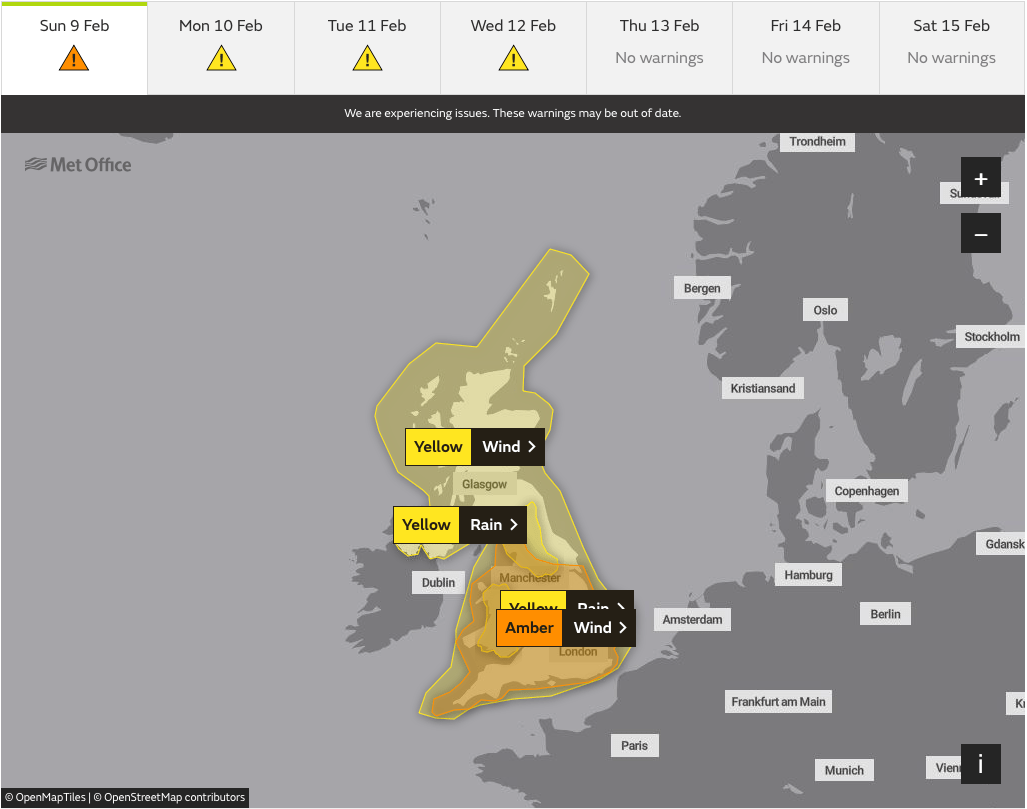 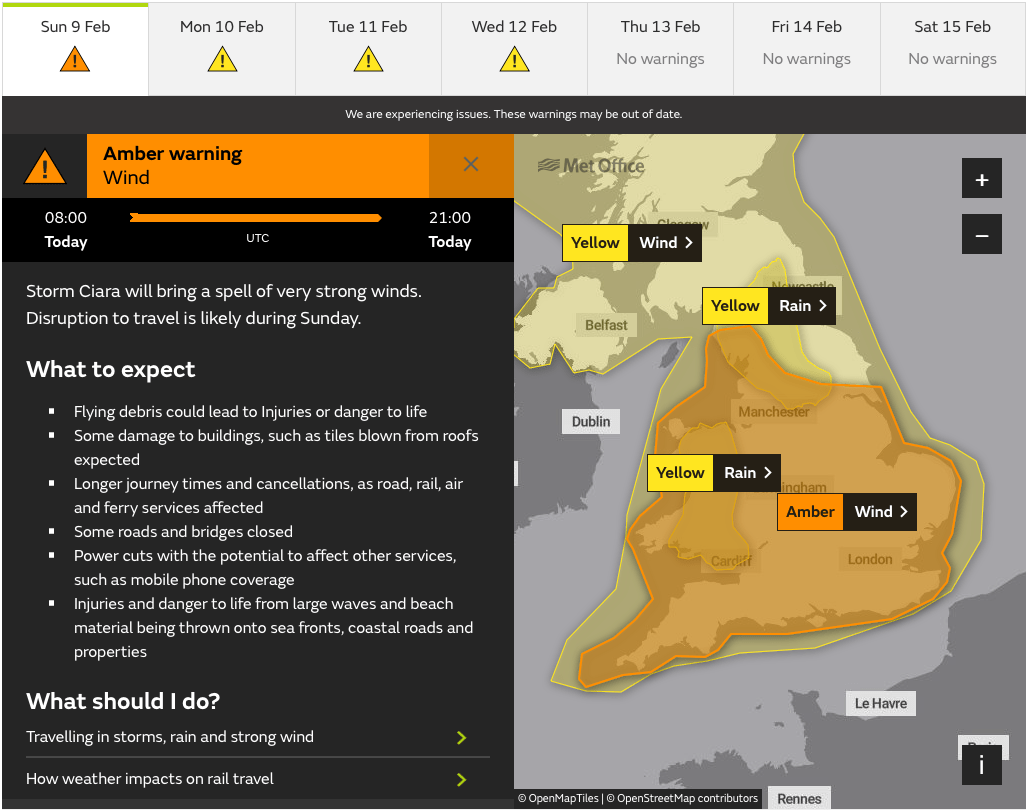 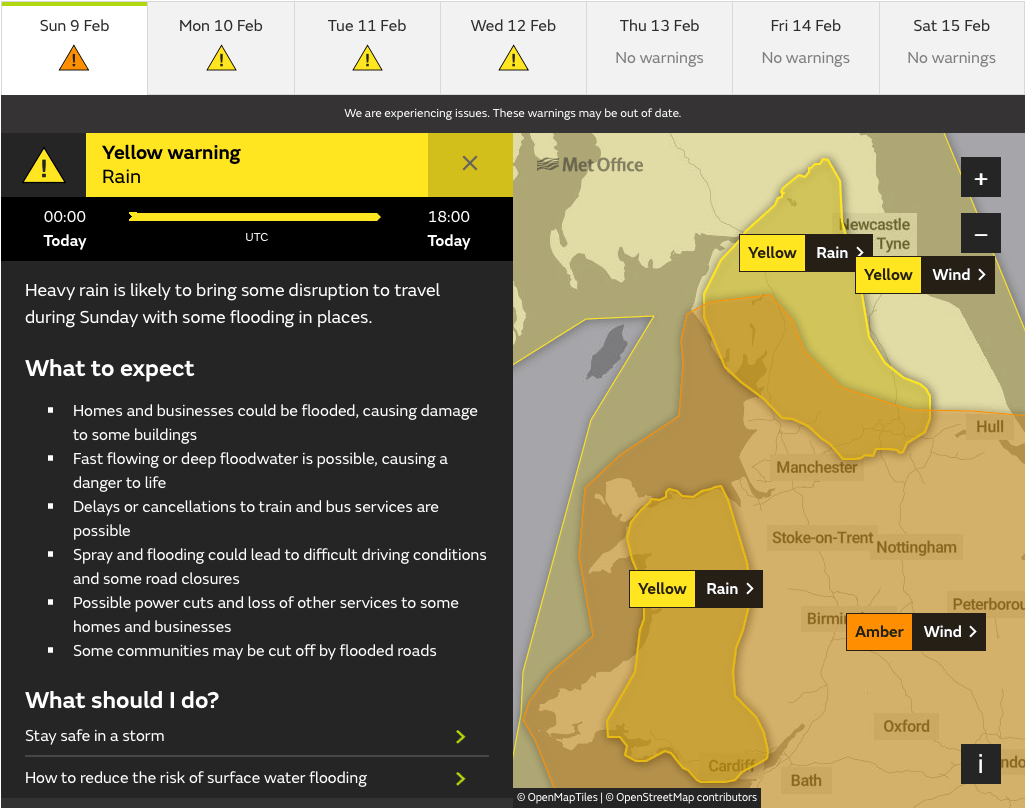 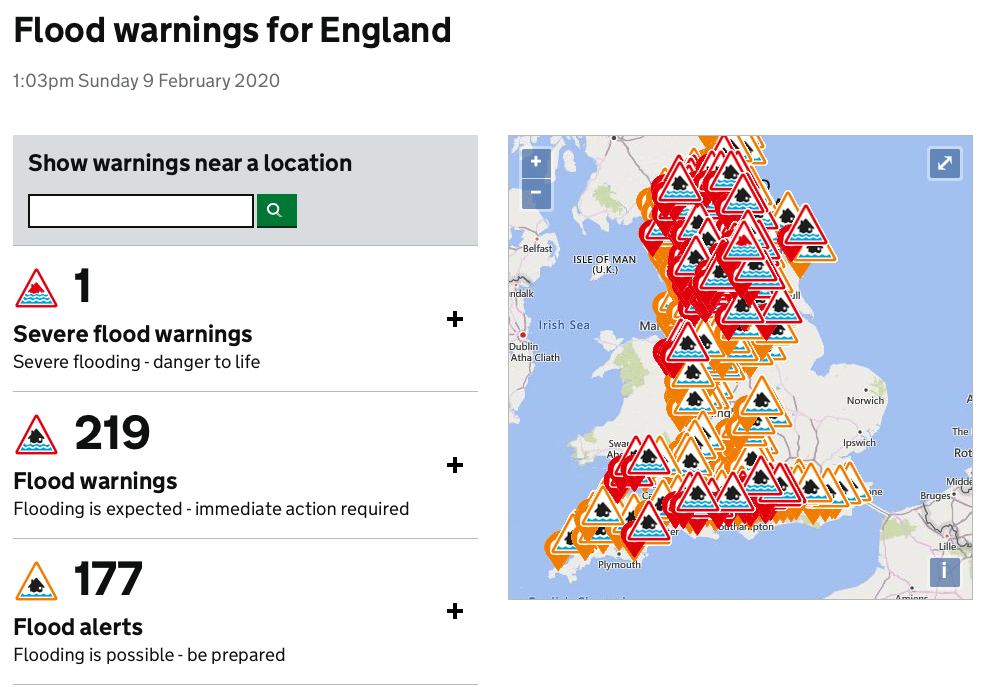 The police encouraged people to use what3words to inform emergency services of the location of people in difficulty.

NEWS: @NYorksPolice says people in difficulty because of #StormCiara should use @what3words app, which helps emergency services find your location by generating three words that match a map reference.

In Northern Ireland, Communities Minister Deirdre Hargey confirmed that emergency funding was being made available to local councils.

The government’s emergency Bellwin scheme for areas in the north of England affected by Storm Ciara was activated.

The scheme – activated for qualifying areas in West Yorkshire, Cumbria and Lancashire – enabled local authorities dealing with the storm to apply to have all of the eligible costs they incur, above a threshold, to be reimbursed by the government.

Glenridding flood defences holding up well, as is the upstream flood relief channel. Designed to slow water upstream to help the village downstream, seem. Many thanks to @EnvAgencyNW for working with us, and thank you to the farmers who let us do this on there land #nfm pic.twitter.com/SWUoNxC4Ac

Flood defences, costing tens of million pounds, that had been built up in the Calder Valley since flooding in Christmas 2015 were breached.