An earthquake measuring 9.0 on the Richter Scale struck off Japan’s northeast coast, about 250 miles (400km) from Tokyo at a depth of 20 miles. 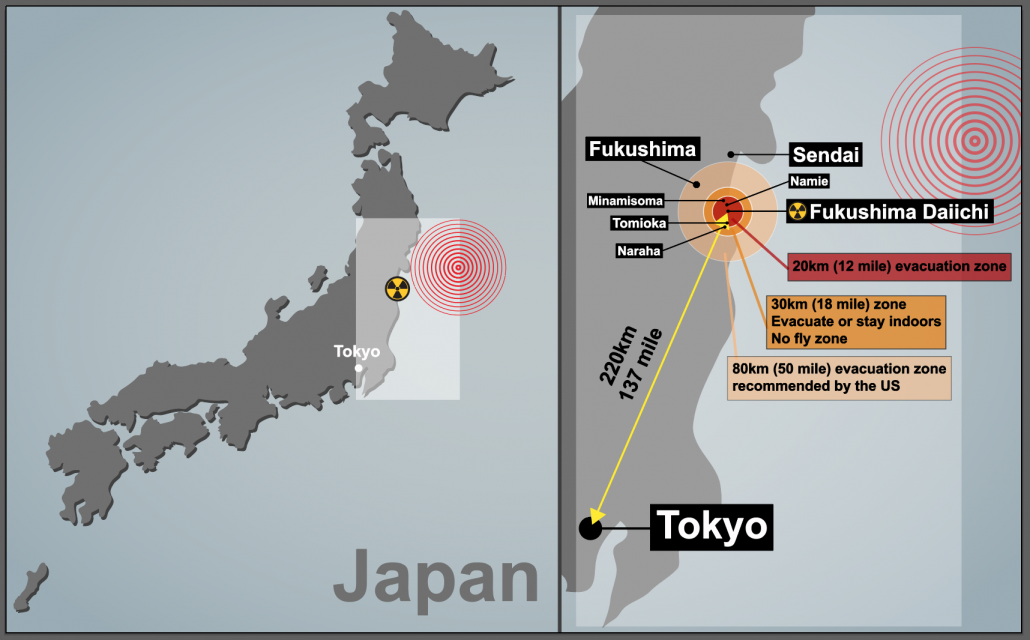 Japan is located on the eastern edge of the Eurasian Plate. The Eurasian plate, which is continental, is subducted by the Pacific Plate, an oceanic plate forming a subduction zone to the east of Japan. This type of plate margin is known as a destructive plate margin. The process of subduction is not smooth. Friction causes the Pacific Plate to stick. Pressure builds and is released as an earthquake.

Friction has built up over time, and when released, this caused a massive ‘megathrust’ earthquake.

The amount of energy released in this single earthquake was 600 million times the energy of the Hiroshima nuclear bomb.

Scientists drilled into the subduction zone soon after the earthquake and discovered a thin, slippery clay layer lining the fault. The researchers think this clay layer allowed the two plates to slide an incredible distance, some 164 feet (50 metres), facilitating the enormous earthquake and tsunami. 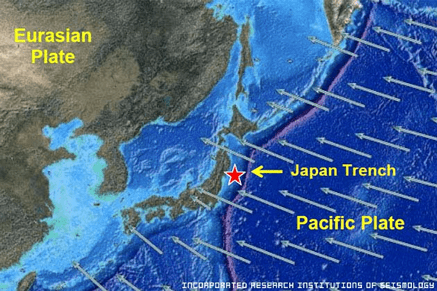 The earthquake occurred at a relatively shallow depth of 20 miles below the surface of the Pacific Ocean. This, combined with the high magnitude, caused a tsunami (find out more about how a tsunami is formed on the BBC website).

Areas affected by the 2011 Japanese earthquake.

The tsunami struck the northeastern coast of Honshu.

What were the primary effects of the 2011 Japan earthquake?

Blackouts – Over 4.4 million households were left without electricity in North-East Japan.

Impacts on the environment

Landfall – some coastal areas experienced land subsidence as the earthquake dropped the beachfront in some places by more than 50 cm.

Plate shifts – It has been estimated by geologists that the Pacific plate has slipped westwards by between 20 and 40 m.

Seabed shift – The seabed near the epicentre shifted by 24 m, and the seabed off the coast of the Miyagi province has moved by 3 m.

Earth axis moves – The earthquake moved the earth’s axis between 10 and 25 cm, shortening the day by 1.8 microseconds.

Liquefaction occurred in many of the parts of Tokyo built on reclaimed land. 1,046 buildings were damaged

What were the secondary effects of the 2011 Japan earthquake?

Economy – The earthquake was the most expensive natural disaster in history, with an economic cost of US$235 billion.

Tsunami –  Waves up to 40 m in high devastated entire coastal areas and resulted in the loss of thousands of lives. This caused a lot of damage and pollution up to 6 miles inland. The tsunami warnings in coastal areas were only followed by 58% who headed for higher ground. The wave hit 49% of those not following the warning.

Nuclear power – Seven reactors at the Fukushima nuclear power station experienced a meltdown. Levels of radiation were over eight times the normal levels.

Transport –  Rural areas remained isolated for a long time because the tsunami destroyed major roads and local trains and buses. Sections of the Tohoku Expressway were damaged. Railway lines were damaged, and some trains were derailed.

Aftermath – The ‘Japan move forward committee’ thought that young adults and teenagers could help rebuild parts of Japan devastated by the earthquake.

Impacts on the environment

Coastal changes – The tsunami was able to travel further inland due to a 250-mile stretch of coastline dropping by 0.6 m.

What were the immediate responses to the Japan 2011 earthquake?

What were the long-term responses to the Japan 2011 earthquake?

Why do people live in high-risk areas in Japan?

There are several reasons why people live in areas of Japan at risk of tectonic hazards: