The area in and around Malham is home to a range of limestone features. The map below provides evidence of these.

Malham Tarn is an upland lake. A tarn forming in an area of limestone is very unusual. The reason why the water has accumulated is that the bedrock beneath the tarn is impervious Silurian slate. The outflow stream from Malham Tarn flows south and disappears into the ground where the silurian slate meets pervious limestone through sinkholes (labelled Water Sinks on the OS Map above) and reappears at Airehead Springs. The tarn was formed from glacial meltwater after the last ice age 18000 years ago. 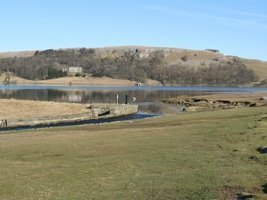 The video below shows Water Sinks.

To the south of Water Sinks is Watlowes Dry Valley. As the name suggests water no longer flows down here (due to Water Sinks which is a sinkhole). It was formed when water flowed to, and over, Malham Cove. During the last ice age, water could not penetrate the frozen ground, therefore, it eroded the V-shaped valley. After the ice age water was able to permeate the joints and bedding planes leaving the dry valley.

Malham Cove is an amphitheatre-shaped cliff formation of limestone rock. Water from Malham Tarn once flowed over the cliff. It is now a popular destination for climbers who dare to scale the 260ft cliff face.

Water flows down swallow holes to the north of Malham Cove. This water flows underground along bedding planes and down joints. This continues until the water reaches an impermeable layer of rock. Water then flows over this until it re-emerges.

On top of Malham Cove is a limestone pavement. Malham Limestone Pavement is a plateau of bare weathered limestone. The pavement is made of huge slabs of rock (clints) which are separated by gaps (grykes). During the last ice age, the topsoil in this area was eroded by the moment of ice. Since then weathering has been slow so very little new soil has formed. Slightly acidic rainwater has run-off the surface of the limestone and has chemically weathered the limestone. The joints (vertical cracks in the limestone) have been eroded creating grooves known as grykes leaving clumps of limestone known as clints.

Goredale Scar is a gorge, complete with waterfalls, cut into the limestone hillside. Like Malham Cove, it was formed by glacial meltwater. Some Geologists believe it was once a cavern, the roof of which has been eroded.