What is the interquartile range?

The inter-quartile range shows the spread of a data set but is more accurate than using the range because it removes extremes. The inter-quartile range shows the spread of the middle 50 per cent of the data set because it removes the top and bottom 25%. It gives a better indication of how data is spread around the median value. The values are then divided into four equal groups or quartiles, where n is the number of values.

The upper quartile is the value that occurs in the following position:

The lower quartile is the value that occurs in the following position:

The rainfall data below has been ranked in order and has been presented on a graph.

To work out the interquartile range for the rainfall data:

Therefore, the interquartile range is the difference between 180 and 342 = 162mm

Another way to calculate the interquartile range is to rank the data from lowest to highest e.g. 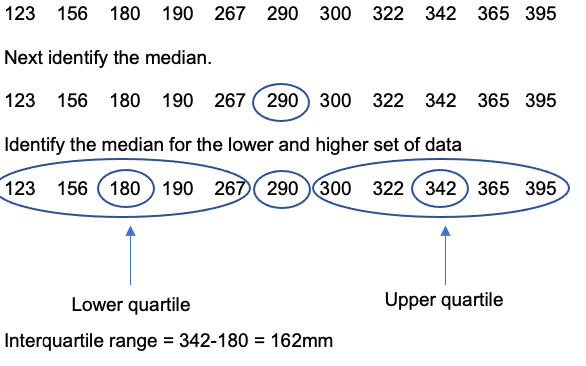