Deforestation in the tropical rainforest

Deforestation in the tropical rainforest

A bar graph to show the rainforest area by country 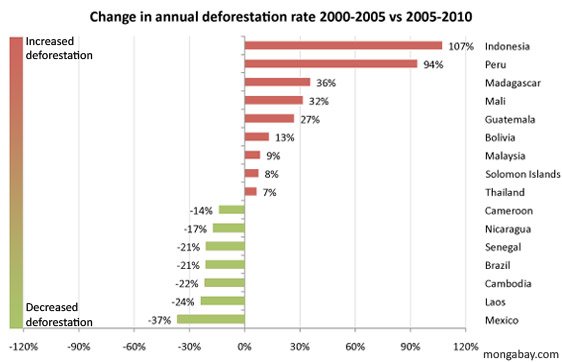 The rate of deforestation declined in seven countries. Deforestation in Brazil has fallen to a record low. Over half of the remaining rainforest in Brazil is in some way protected. However, an area three times the size of the UK has been cleared since 1970. This accounts for 20% of the original forest.

The rate of reductions in other countries reflects that other countries have already put measures in place to protect their rainforests. In some cases, for example in Mexico, considerable efforts are being made to save what little rainforest is left. But it is only the rate that has decreased. Deforestation continues in all the countries shown in the graph above. Indeed, it is still happening in all 62 countries.

Today, global Rates of deforestation are:

Causes and Effects of Deforestation in the Rainforest

The image below shows some of the causes and effects of deforestation in the Amazon Rainforest.

How do humans affect the rainforest

Slash and burn
Most clearances are still by the local people and tribes needing land on which to grow crops. They clear the forest by ‘slash and burn’. Vegetation is cut down and then burned. The ash acts as a fertiliser adder nutrients to the soil. When the soil begins to turn infertile (usually after 3-5 years) the people move on. This is called shifting cultivation. It is a sustainable method of farming in the rainforest. It ensures the forest will recover.

Road Building
The Transamazon Highway has allowed increased access to the Amazon Rainforest.

Logging
Commercial logging is the major cause of primary rainforest destruction in South East Asia and Africa. Worldwide, it is responsible for the destruction of 5 million ha. per year. Logging roads enable landless people to enter the forest. In Africa, 75% of land being cleared by peasant farmers has been previously logged.

Cattle Ranching
Ranching is a major cause of deforestation, particularly in Central and South America. In Central America, two-thirds of lowland tropical forests have been turned into pasture since 1950.

Hydroelectric Power
An unlimited supply of water and ideal river conditions have led to the development of hydroelectric power stations (HEP Stations).

Farming
There are nearly 3 million landless people in Brazil alone. The government has cleared large areas of the Amazon Rainforest and encouraged people to move there. The scheme has not been successful. Farmers stay on the same land and attempt to farm it year after year. Nutrients in the soil are quickly exhausted as there is no longer a humus layer to provide nutrients. The soil becomes infertile and nothing will grow.

Mining
The mining of iron ore, bauxite, gold, oil and other minerals have benefited many LEDCs. However, it has also devastated large areas of rainforest e.g. The Amazon.

Deforestation is causing many problems at a range of scales:

Sustainable management of the tropical rainforest