The Nutrient Cycle and Biodiversity in Deciduous Woodlands

The Nutrient Cycle in Deciduous Woodlands

Nutrients in the deciduous woodland are recycled more slowly than in tropical rainforests. Nutrients are cycled between three stores, litter (dead organisms such as leaves), biomass (living organisms) and soil. 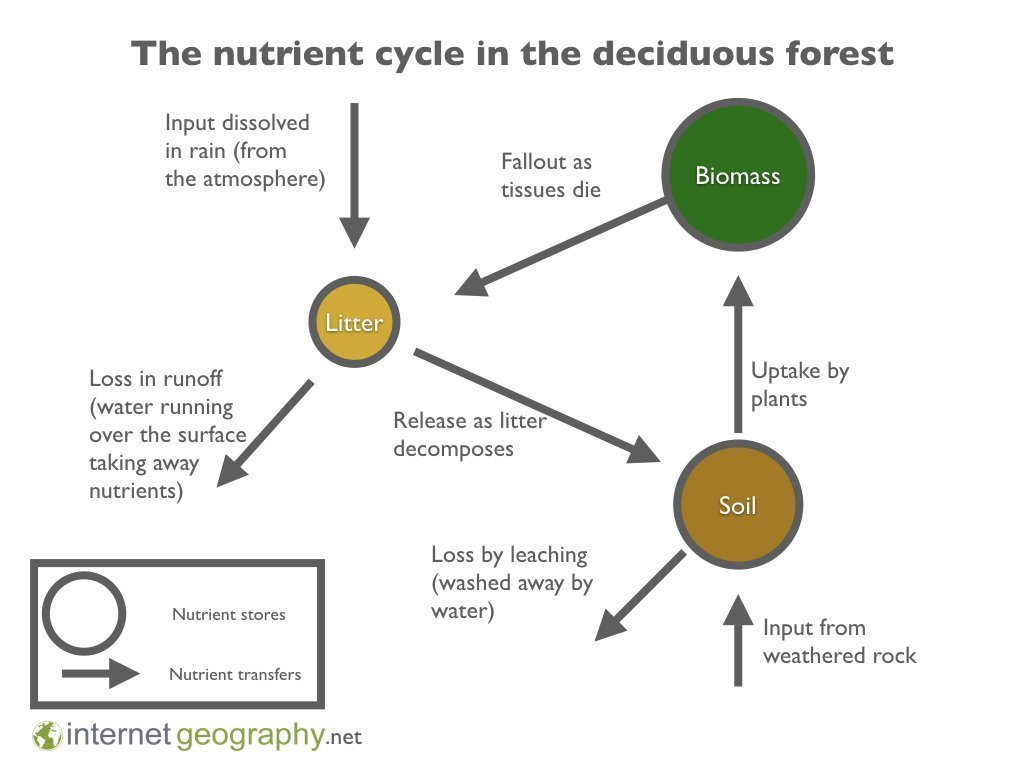 Nutrients are fairly evenly shared between the stores, however, the biomass is the largest store due to a large number of trees.

Biodiversity in the temperate, deciduous woodland

Deciduous woodlands have moderate biodiversity. There are no temperature extremes and moderate rainfall throughout the year. Many plants can survive in this climate, though not as many as the tropical rainforest.

The different vegetation layers in the deciduous woodland provide a range of habitats for plants and animals to thrive. Flora and fauna have adapted to thrive to the particular conditions of each layer. Oak trees can support 350 species of insects from roots to canopy.

Deciduous woodlands are seasonal ecosystems. In the summer they are very productive with high rates of nutrient recycling. However, during the winter there is little growth or nutrient recycling, many species are dormant and there is little food to eat. The changing climatic conditions present a range of challenges to living organisms, particularly those specialists that only have a few sources of food.

Human activity in temperate, deciduous woodlands has caused considerable disturbance to the ecosystem, preventing vegetation from becoming established enough to support a lot of species.

How have animals adapted to the deciduous forest?