The Somerset Levels are a coastal plain and wetland area in Somerset, England. Thousands of years ago, the area was covered by the sea, but today it’s a landscape of rivers and wetlands – artificially drained, irrigated and modified to allow productive farming.

It is claimed that the Somerset Levels are one of the lowest areas in the UK. This is because much of the area lies below the high-water mark of spring tides. The area is very flat and has a maximum altitude of 8m above sea level. All rivers in this area, including Axe, Sheppey and Brue, are in the north, while to the south, the rivers are the Cary, Yeo, Tone and Parrett drain into the Bristol Channel.

In January 2014, the Somerset Levels experienced floods greater than any other in living memory. Estimates suggest that 10% of the area was underwater when the flooding was greatest. 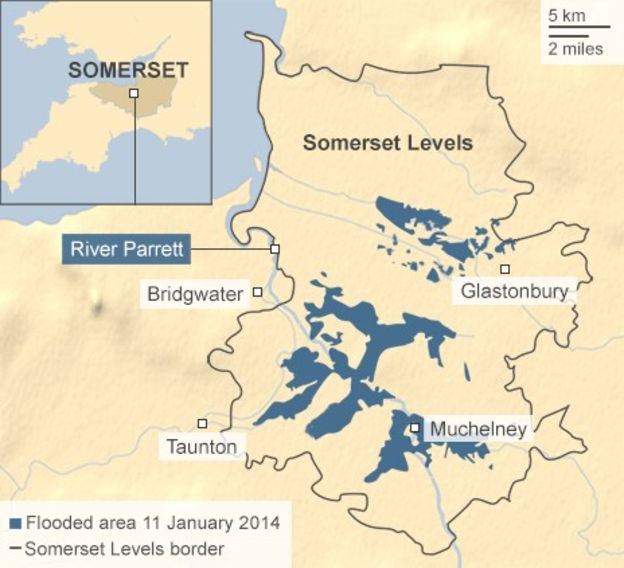 What were the physical causes of flooding in the Somerset Levels?

A quick succession of prolonged Atlantic storms, with persistent rainfall and gale-force winds, was the primary cause of flooding. The rivers could not cope with the significant amount of rain that fell. Additionally, high tides in the Bristol Channel and its narrowing create tidal surges. These blocked the floodwater trying to escape the Somerset Levels. Coastal defences coped with the tidal surges.

What were the human causes of flooding in the Somerset Levels?

There had been less dredging of the river channels on the Somerset Levels leading up to 2014. However, as a result, the channels had raised due to sediment accumulation. This reduced the capacity of rivers to transport water, leading to flooding.

Change in farming practices has also contributed to flooding. Much of the land has been converted from grassland to grow maise. This more intensive use of the land means it is less able to retain water, causing it to run over the surface rather than being absorbed.

What were the impacts of flooding in the Somerset Levels?

Over 600 homes and 6880 hectares of agricultural land were flooded. In addition, a number of villages were cut off after roads were flooded.

There were several incidents of crime during the floods. Nine hundred litres of fuel was stolen from a pumping station in Westonzoyland. There were also reports of heating oil and quad bikes being stolen from homes affected by flooding.

Many main roads were closed, including the A361 linking Taunton and Street. Flooding also disrupted train services on the main Bristol line between Taunton and Bridgwater.

There were considerable economic costs associated with the floods. Fuel used to power emergency pumps cost £200 000 per week. An estimated £1 million was lost by local businesses. The Somerset floods cost the county’s tourism industry an estimated £200 million.

The soil was damaged after being underwater for nearly three months. In some areas, it took over two years to restore the soil before crops could be grown.
Insurance costs increased in flood-hit areas of Somerset.

As expected for a high-income country (HIC), the response to the flood was well organised and rapid.

Local people in South West England were warned of heavy rain when the Met Office issued an amber warning. The public was advised to prepare for significant flooding by the Environmental Agency. Many people used sandbags to protect their property and moved valuable items upstairs. In Moorland, a man constructed a large wall out of clay and mud to protect his house from flooding.

Rescue boats were used to help stranded people by the fire brigade, who also visited hundreds of properties. Rescue crews supported residents of Moorland in evacuating. The owners of some 80 homes agreed to evacuate; however, around 30 residents stayed at home. Additional police patrols were introduced as the result of increased crime.

The army was sent into the area with specialist equipment towards the end of January. They issued sandbags and distributed food. They were later joined by 40 Royal Marines to provide additional support.

Sixty-five pumps were used to drain 65 million m3 of floodwater.

Local people, led by the Flooding on the Levels Action Group (FLAG), provided local support to the people affected. This included fundraising and the collection and distribution of food. They also used social media, such as Facebook and Twitter, to share the news.

The government made an estimated £15m to meet the immediate costs associated with protecting lives and properties.