Is climate change a new thing?

Climate change is any significant change in the Earth’s climate over a long period. Global temperatures have fluctuated (gone up and down) throughout the Earth’s history.

The Quaternary period is the most recent geological time period, spanning from 2.58 million years ago to today.

The Earth’s climate was warmer and more stable in the period before the Quaternary. Since then, things have changed quite significantly. 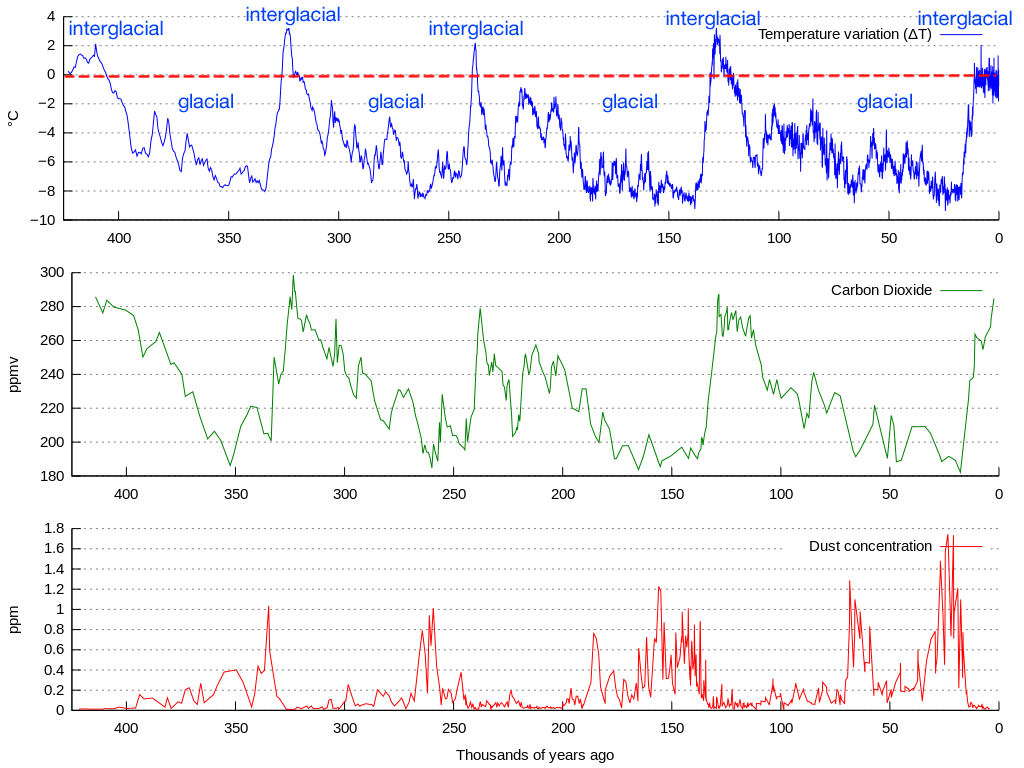 Ice core data for the past 400,000 years, with the present at right. Note the length of glacial cycles averages ~100,000 years. The blue curve is temperature, the green curve is CO2, and the red curve is windblown glacial dust (loess). Image a derivative of By Vostok-ice-core-petit.png: NOAA derivative work: Autopilot (Vostok-ice-core-petit.png) [CC-BY-SA-3.0 (http://creativecommons.org/licenses/by-sa/3.0/) or GFDL (http://www.gnu.org/copyleft/fdl.html)], via Wikimedia Commons

Since the last glacial period, 15000 years ago, the climate has been warming. Global warming is the term used to describe the rapid increase in global temperatures over the last century.

A range of evidence has been used by scientists to work out changes in the Earth’s climate.

An ice core is a sample taken from a glacier or ice sheet. It involves drilling down into the ice and removing a cylinder of ice. As ice is formed in layers, it is possible to analyse gasses from each year. From this, scientists can work out the temperature at the time. Ice cores can be taken from Antarctica, which provides information for the last 400 000 years. Samples of sediment taken from the ocean floor can also indicate temperature over time. It has been possible to gather data from the last 5 million years by using this technique.

Thermometers have been used to measure temperature since the 1850s accurately. This provides reliable, short-term data on climate change.

Analysing pollen preserved in peat bogs or the bottom of lakes indicates the species living in the past. This indicates temperatures based on what we know about the conditions different plants thrive in.