Human Activities and the Coast

Around the coast of the UK, there are few stretches that have been left untouched by human activity. Four human activities that affect the coast are:

The effects of development on the coast

Tourism leads to a crowded coast. The development of tourist facilities, such as hotels and campsites all put pressure on the coast.

The two other types of development that put pressure on coasts are:

Each of these puts pressure on coasts that are already crowded.

The effects of agriculture on the coast

Romney Marsh is a wetland area in the counties of Kent and East Sussex in the southeast of England. The marsh provides summer grazing pasture for cattle. The marsh faces two challenges:

The effects of industry on the coast

Industrial developments dominate coastal environments along some stretches of the UK coast. Gas terminals receiving North Sea gas are located in places such as Easington on the Holderness Coast and Bacton on the Norfolk coast. These facilities are essential to the UK economy. However, these essential developments bring conflict with tourists. The map below shows Bacton, a popular tourist destination, located in the shadow of the gas terminal.

The effects of coastal management on the coast

Coastal management can have a range of impacts on coastal environments. Some hard engineering strategies can cause rates of erosion to increase downdrift of the protected areas. Locations such as Mappleton, Hornsea and Withernsea on the Holderness Coast, which have significant hard engineering solutions, have experienced increased rates of erosion downdrift of defences due to sediment being trapped by groynes. The image below shows the impact of terminal groyne syndrome on Withernsea. 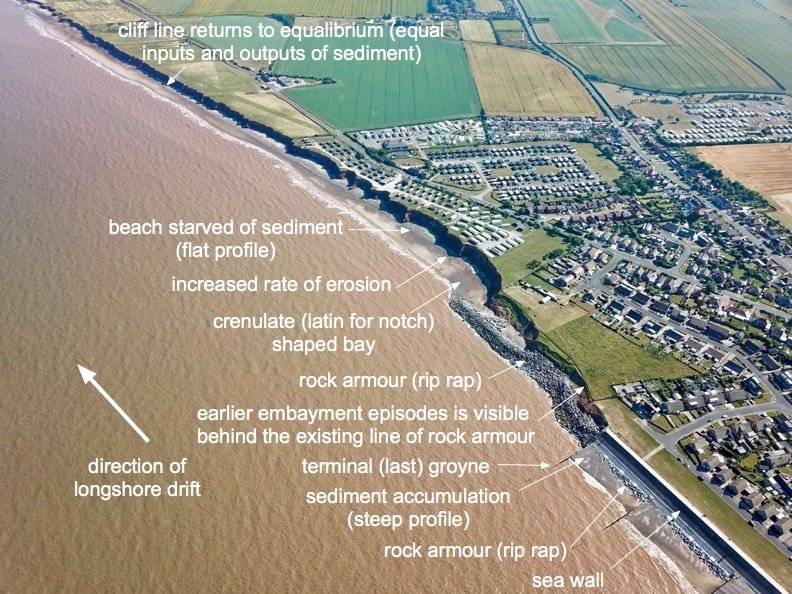