This case study has been developed to support students studying Edexcel B GCSE Geography.

Mount Nyiragongo is a composite volcano located in the east of the Democratic Republic of the Congo (DRC). The volcano consists of a huge (2km wide) crater, usually filled with a lava lake, and is only 20km away from the city of Goma. Nyiragongo is currently classed as active (2020).

Nyiragongo is located on a divergent plate boundary where the African plate is being pulled apart into the Nubian plate (east) and Somali plate (west), causing lava to rise between. Eruptions are non-explosive as the lava is basaltic, with a low viscosity, which means it is runny and fast flowing (up to 37 mph). 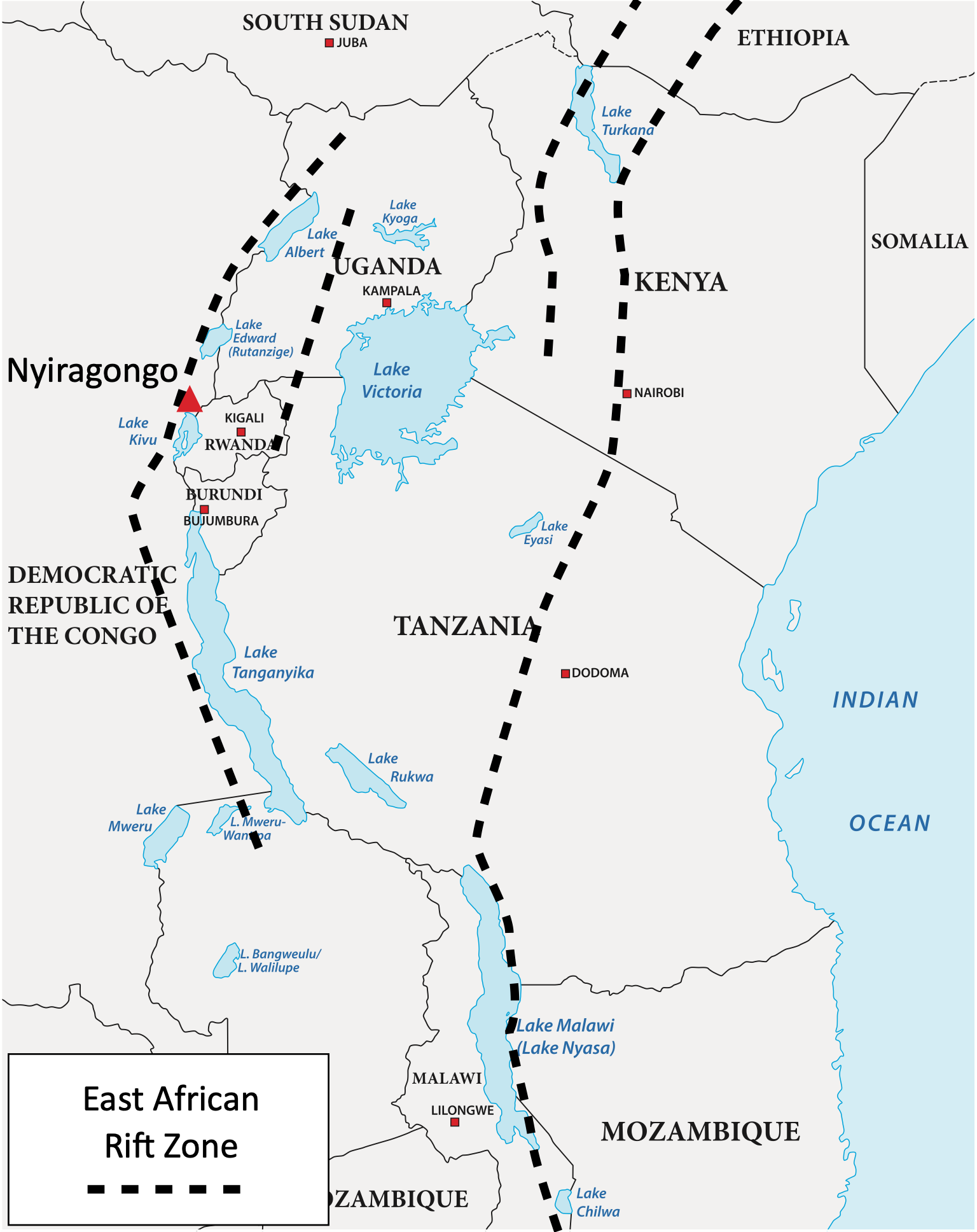 A map to show the location of Mount Nyiragongo

What are the Primary Impacts of Nyiragongo?

The eruption of Mount Nyiragongo in January 2002 had a significant impact on the surrounding area due to huge lava flows.

The primary effects of a volcanic eruption are those caused instantly. These are directly linked to the type of volcano and eruption.

The primary effects of the January 2002 eruption include:

What are the Secondary Impacts of Nyiragongo?

The secondary effects of a volcanic eruption are those that occur in the hours, days and weeks after an eruption.

The secondary effects of the 2002 Nyiragongo eruption include:

How are Nyiragongo’s Hazards Managed?

Approximately 400,000 people were evacuated from the vicinity of the volcano. The pace of evacuation was slow until plumes of smoke from the volcano were visible. The evacuation plans were very limited, many residents had not experienced a volcanic eruption. This led to people heading to the volcano to see the eruption, slowing the evacuation process. As a result, around 50,000 inhabitants of Goma became trapped between two lava flows.

The damage to Goma’s airport disrupted the arrival of international aid.

The United Nations sent 260 tonnes of food to the affected area within a week of the eruption. Families received 26kg of rations each.

UK Oxfam sent 33 tonnes of water-cleansing equipment for 50,000 people in refugee camps. The £150,000 package mainly contained water purification kits to provide clean water for drinking and sanitation. This stopped people from drinking contaminated water from Lake Kivu and helped to reduce the spread of cholera in some refugee camps.

Refugee camps, made from scrap metal, were set up to house the displaced populations.

Communication was poor between agencies and refugees. Many people began to travel back to the affected area within a few days to collect belongings and supplies from their homes, even though it was not yet safe. Some walked across hot lava that was not yet solidified and cooled to get home.

Governments around the world gave $35 million in aid to support refugees.

Thirty new signs that detail the early warning signs of a volcanic eruption have been put up in high-risk areas.  Evacuation routes have also been mapped.

Communities and schools now have evacuation drills to prepare people for future eruptions.

Leaflets have been distributed to vulnerable people containing information on evacuation routes, shelters and advice on what to do in an emergency.

The International Federation of Red Cross and Red Crescent Societies has expressed a need for more funding to release further educational materials to communities in need.

Officials have been retrained and provided with evacuation plans; each has a designated community to support.

Community officers have been trained to relay information to vulnerable communities if an eruption occurs.

Knowledge from similar volcanoes has encouraged vulcanologists to measure carbon dioxide emissions from the volcano and within Lake Kivu to predict if levels will become lethal (as people can die from carbon dioxide poisoning).

An observatory for the volcano, The Observatoire Volcanologique de Goma, constantly monitors the volcano.

The large lava lake in Mount Nyiragongo is visible from above, so its levels can be carefully monitored to see if an eruption is impending.