Why was Guatemala‘s Volcanic Eruption More Deadly Than Hawaii’s?

The eruption of two volcanoes within the space of a month led to two very different impacts.

Why was Guatemala‘s Volcanic Eruption More Deadly Than Hawaii’s?

There are significant differences between the eruption of Guatemala’s Fuego volcano and the eruption of Kilauea in Hawaii. Although both eruptions resulted in buildings being destroyed the eruption of Fuego led to the deaths of at least 62 people whereas Kilauea’s recent eruption has not claimed any lives.

This video provides an overview of the differences between the eruptions.

Below we explore in more detail why these eruptions are so different and why they have drastically different death tolls:

Type of volcano and eruption

Kilauea is a shield volcano. Shield volcanoes are low with gently sloping sides and are formed from layers of lava. Eruptions are typically non-explosive. Shield volcanoes produce fast flowing fluid lava that can flow for many miles. Eruptions tend to be frequent but relatively gentle. Although these eruptions destroy property it is rare for death or injury to occur. Kilauea’s main mode of destruction is lava. Although on this occasion a series of fissures or cracks opened to the east of the volcano releasing lava close to built-up areas. Residents were ordered to evacuate including the 1,500 population of Pahoa. The eruption was ongoing for over a month. 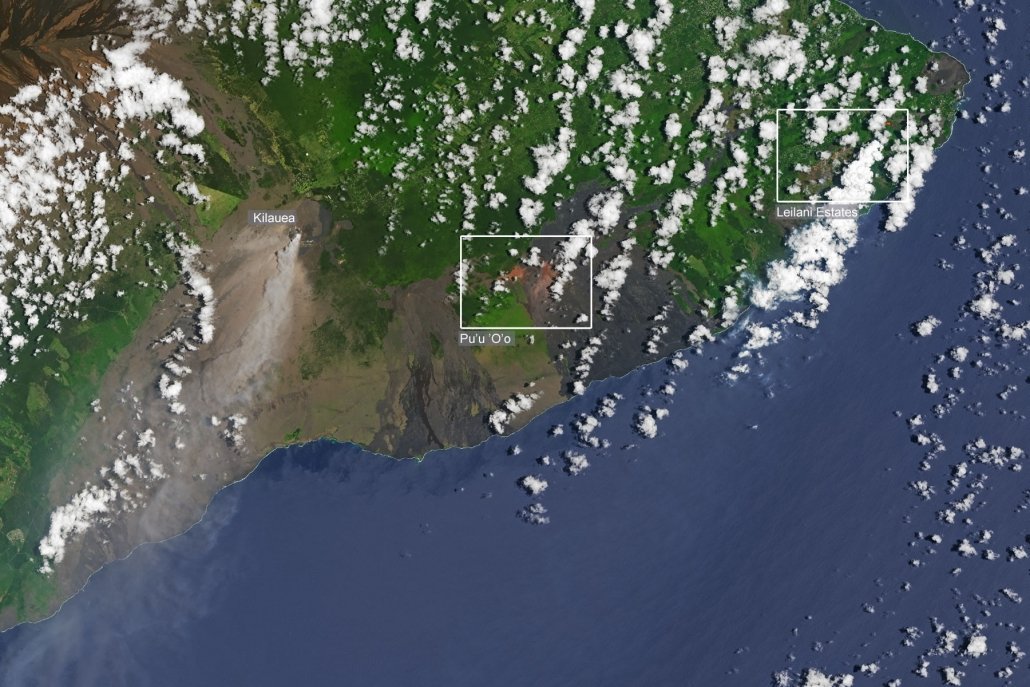 Large hot spots associated with active fissures were detected northeast of Leilani Estates. The lava was flowing from fissure 17, one of the most active of the 20 new fissures that have emerged. The U.S. Geological Survey’s Hawaiian Volcano Observatory (HVO) reported that fissure 17 produced lava fountains and spatter explosions that rose more than 30 meters (100 feet) into the air on May 14. Slow-moving lava from that fissure had moved east-southeast and traveled roughly one mile.
One of the notable things about this image is what is not visible. Normally, a strong thermal signal stands out at Pu’u ’O’o, a vent located roughly halfway between the summit and Leilani Estates. On April 30, 2018, activity at Pu’u ’O’o subsided as the lake drained, and lava moved eastward toward Leilani Estates.
Source – NASA Earth Observatory

Unusually, there was a large amount of ash emitted from one eruption on Hawaii. This did not present as a pyroclastic flow because the material had a low density so rose as an ash column.

However, Fuego is a stratovolcano.  Eruptions from stratovolcanoes are typically very explosive. This is because of high levels of gas and thick, highly viscous lava. The eruption led to a pyroclastic flow, a superheated avalanche of volcanic gas, ash and rocks, similar to the one that destroyed Pompeii. Pyroclastic flows occur when the material released from the eruption is too dense to rise as an ash column and instead cascades down the volcano’s slopes. The pyroclastic flow was estimated to be around 1000°C and travelled at speeds of over 100mph. The ash cloud from the eruption reached a height of 10km (33,000ft). It could be clearly seen from space, as this image taken by Nasa shows. 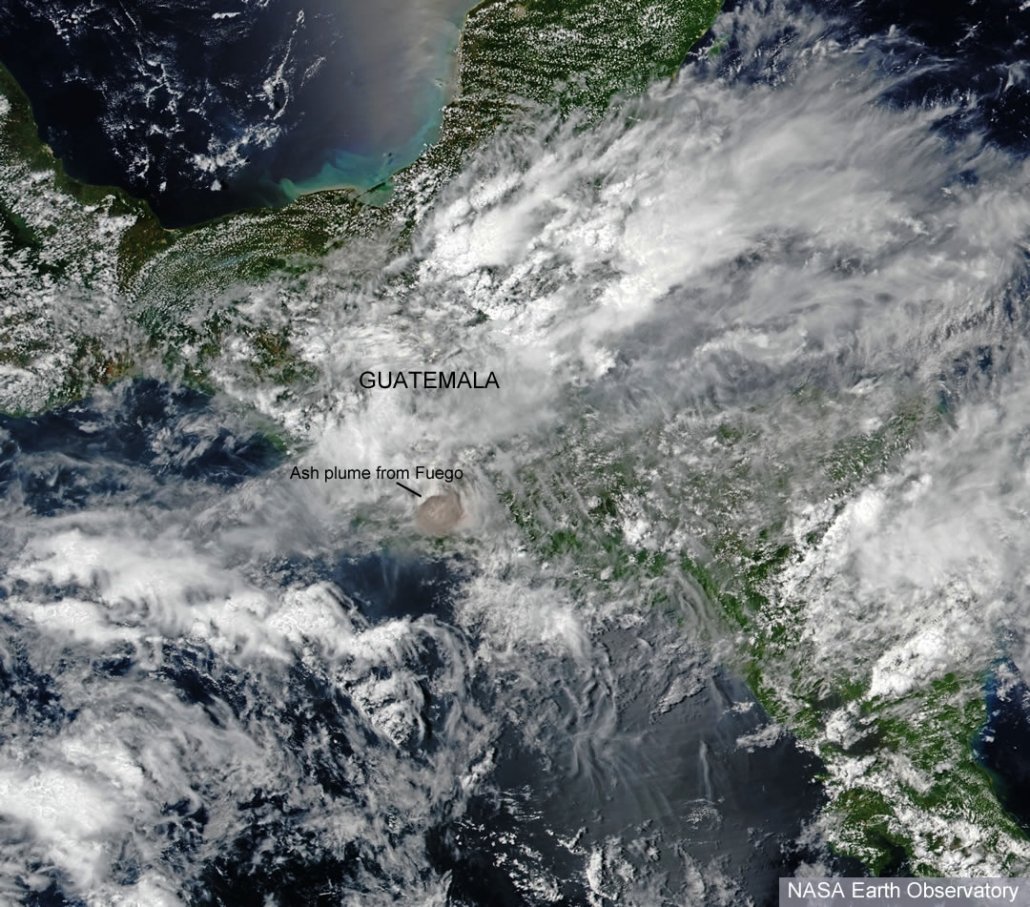 A satellite image showing the ash cloud from the eruption of Fuego. Source – NASA Earth Observatory

Size of the eruption

Mount Kilauea is extensively monitored by the United States Geological Survey (USGS). Data that indicates a potential eruption, such as a reduction in the size of the lava lake or an increase in seismic activity is reported to the Hawaii County Civil Defense Agency.  The CDA are responsible for directing and coordinating the development and administration of the County’s total emergency preparedness and response program to ensure prompt and effective action when disasters occur on Hawaii. However, at Fuego, there is limited equipment around the volcano to accurately forecast an upcoming eruption. Guatemala is just not rich enough to be able to afford such a network. Also, it is always very hard to forecast a stratovolcano that is in a state of constant eruption, like Fuego.

Population density around the Fuego volcano was much higher than around Kilauea. Although the lava from Kilauea destroyed over 82 properties this is because the lava was so runny it travelled a long distance beyond the boundaries of the Hawaii Volcanoes National Park.  As the lava flows significantly slower than a pyroclastic flow there was plenty of time to evacuate nearby residents. On the other hand, residents close to Fuego were not as lucky. There are a number of villages in the foothills of Fuego where villagers have been attracted by the rich, fertile farmland created by previous eruptions. That meant unsuspecting villagers, such as those in the community of El Rodeo, were suddenly overwhelmed by the fast-moving pyroclastic flow.

The footage below shows people filming the pyroclastic flow as it travelled towards them. Although they are hypnotic to the eye people educated about the risks associated with pyroclastic flows would not put themselves in the path of one. This suggests that further education of people living in and around Fuego of its volcanic hazards would not only be helpful, it would save lives. However, the residents of Hawaii are well versed in the risks associated with Kilauea. Scientists of the U.S. Geological Survey’s Hawaiian Volcano Observatory (HVO) have instruments that monitor the rift zones 24 hours a day. Evacuation orders were issued when lava started to flow from fissures into residential areas. Inhabitants of the island are encouraged to develop an evacuation plan including locations they can stay should their property be at risk from a lava flow.

Although the areas around both volcanoes will take years to recover the area around Fuego faces further risks that Kiluea doesn’t. Due to the vast amount of pyroclastic material erupted from Fuego there is a risk of lahars claiming lives in the future. A lahar is a volcanic mudflow caused by rainwater mixing with volcanic debris such as ash.

However, the high levels of toxic gas emissions from the Kilauea eruptions could present health problems in the future for Hawaii’s residents. Volcanic smog, called vog, which contains mostly sulfur dioxide and acid particles, along with ash, is an air quality concern.

As the molten rock travelled to the coast and began pouring into the cool seawater it created clouds of lava haze or “laze”. Officials warned people to stay away since the plumes can travel up to 15 miles downwind, according to the Hawaii Volcano Observatory. The clouds form when hot lava boils seawater, creating tiny shards of volcanic glass and hydrochloric acid that then get carried in steam. The plumes can be deadly. While there has been a moderate increase in the number of people entering Hilo medical centre for treatment of vog-related symptoms since the eruption there have been no deaths. However, inhaling vog or laze could potentially worsen existing health conditions such as asthma or cardiovascular disease.