How is inequality increasing in India?

Over the last 30 years, inequality in India has increased. As you can see from the graph below its GINI coefficient has risen from 32.6 in 1987 to 35.7 in 2011. This means most of the benefits resulting from India’s economic development have gone to the wealthiest, while the poorest remain poor.

A large proportion of people live in poverty and until recently this trend was increasing. The graph below shows the number of people earning below US$3.10 a day in 1993, 2004, 2009 and 2011 in India. 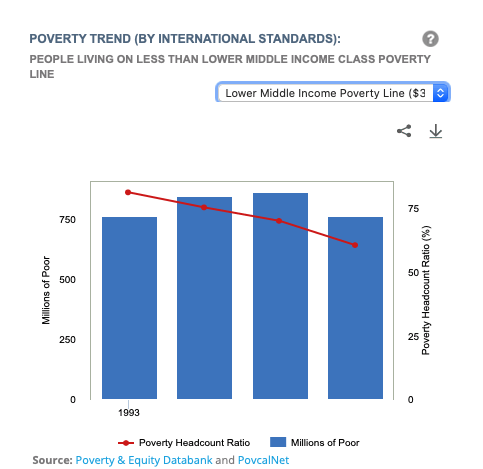 Despite there being significant inequality in India, there have been some positive social changes. As the economy has changed there is a growing middle class who have been able to find higher paid jobs. These people have driven a rise in consumerism, such as the growing demand for mobile phones, leading to further economic growth.

Additionally, since 2009, primary education has been free and compulsory, leading to 96% of children now being enrolled for school. the standard of teaching has improved and the government are now trying to increase the number of children in secondary education by building more schools and employing more teachers.