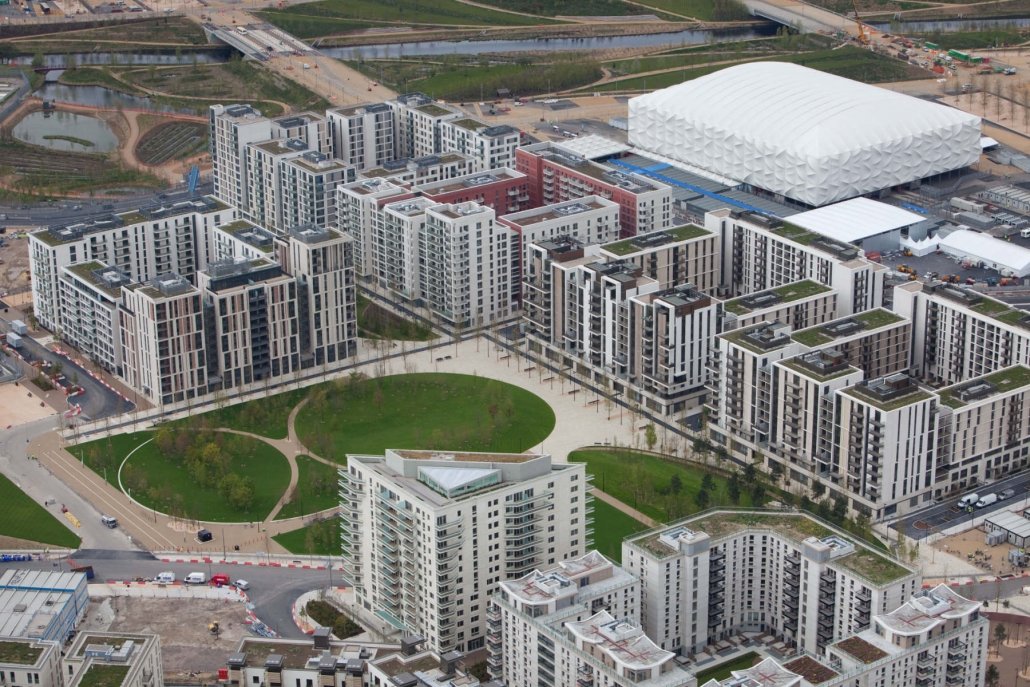 How is East Village an example of sustainable urban living?

10 hectares of parkland have been created, containing hundreds of newly planted trees and ponds. These provide habitats for wildlife.

The athletes’ village has been transformed into modern, high-density apartments. These have been constructed to a high standard of energy efficiency and insulation. Apartments lose less heat than low-rise housing.

A green roof or living roof is a roof of a building that is partially or completely covered with vegetation and a growing medium planted over a waterproofing membrane.

Green roofs have been included on residential blocks, providing habitats for wildlife as well as slowing the flow of surface run-off from rain.

Parking is provided for each apartment block and residents must pay extra for a space. However, the area has good walking and cycling routes to encourage people from their cars.

There are 35 independent shops, cafes and bars serving the local community. This keeps money in the local area as they are less likely to travel to shop.

A large health centre has been constructed along with a school for 2000 3 to 18-year-olds. These services are essential to support the local community.

What green spaces have been created in East Village?

How efficient is East Village?

Compared to other urban areas, East Village uses much less water and energy.

Water use in East Village is 50 per cent less than typical in urban areas. This has been achieved through recycling water naturally and using reed beds in wetland areas. Rainwater is filtered naturally before being recycled and used for irrigating plants and flushing toilets. Fresh drinking water is on a separate system.

East Village uses 30 per cent less energy than an average urban area. This is because of combined heat and power (CHP). CHP involves generating electricity and heat from the same energy source, in this case, burning biomass. Water is heated to create steam that drives a turbine to generate electricity. The hot water produced in this process is pumped around the nearby apartments and is used to heat them.

What are the benefits of East Village?