The South-North Water Transfer Project aims to transfer significant quantities of water from China’s humid south to the arid north. 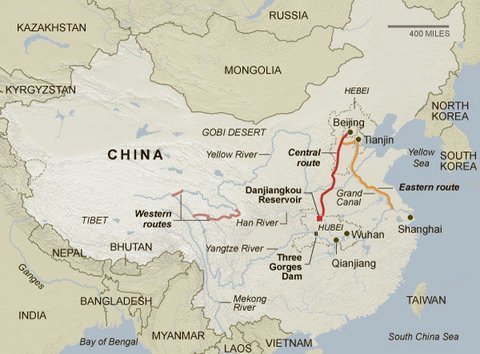 The US$62 billion scheme, designed to move 12 trillion gallons of water over more than 1000 kilometres, was launched in 2002. The scheme moves water along three distinct routes from the Yangzte River basin in the south to the Yellow River basin in the north.

Why was the South-North water transfer project introduced?

Northern China has long been a centre of population, industry and agriculture and with all three growing apace, the per capita share of the region’s limited water resources has inevitably kept falling.

The South-North Water Transfer Project is one of the most ambitious and expensive water transfer projects in the world. The project was introduced because:

What are the advantages of the South-North water transfer project?

The advantages of the South-North water transfer project include:

What are the disadvantages of the South-North water transfer project?

The disadvantages of the South-North water transfer project include: