At least 1,036 people have died, and another 2,949 were injured in an earthquake that struck Afghanistan’s Paktika province on the morning of Wednesday 22nd June 2022. The earthquake struck about 44km (27 miles) from the south-eastern city of Khost shortly after 01:30 local time (21:00 Tuesday GMT), when many people were asleep at home. 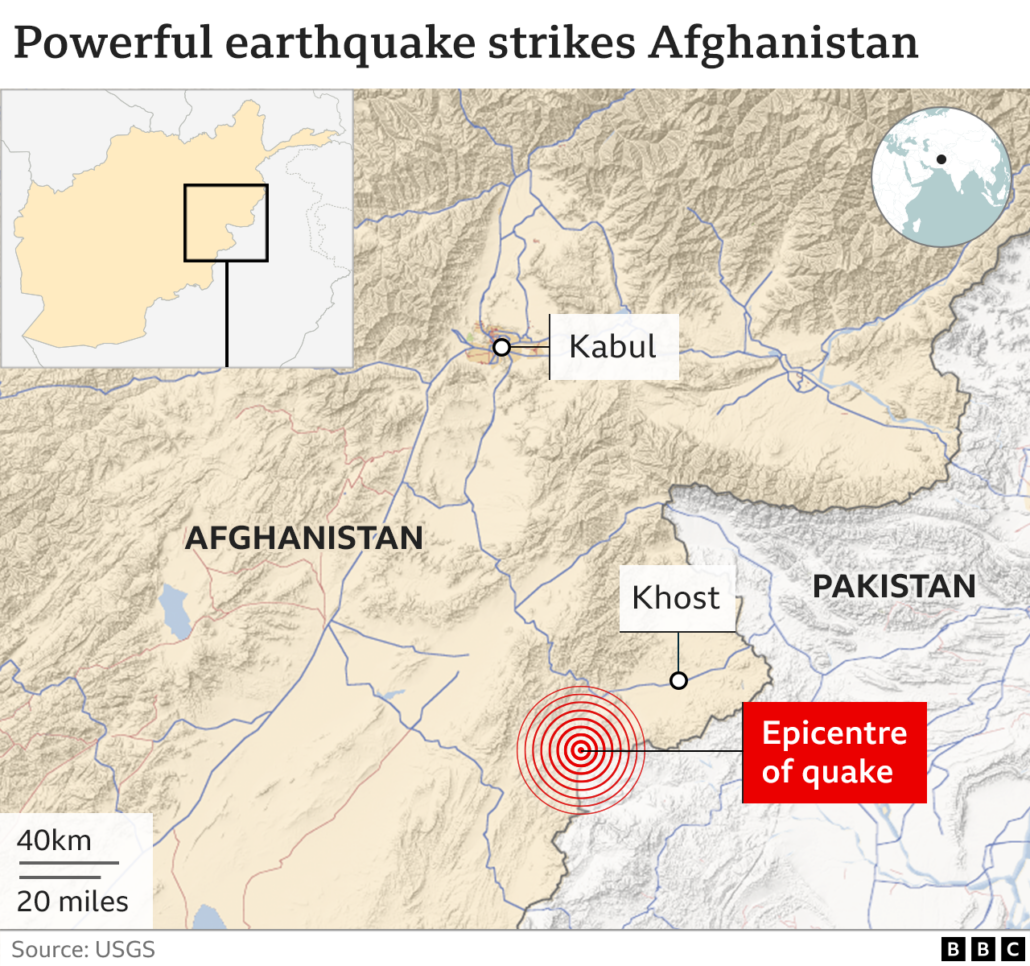 What caused the Afghanistan earthquake?

Earthquakes are common in Afghanistan’s mountainous province of Khost — nearly 50 have been recorded over the past five years, according to the US Geological Survey.

Afghanistan is earthquake-prone because it is located on the Alpide belt, the second most seismically active region in the world after the Pacific Ring of Fire. 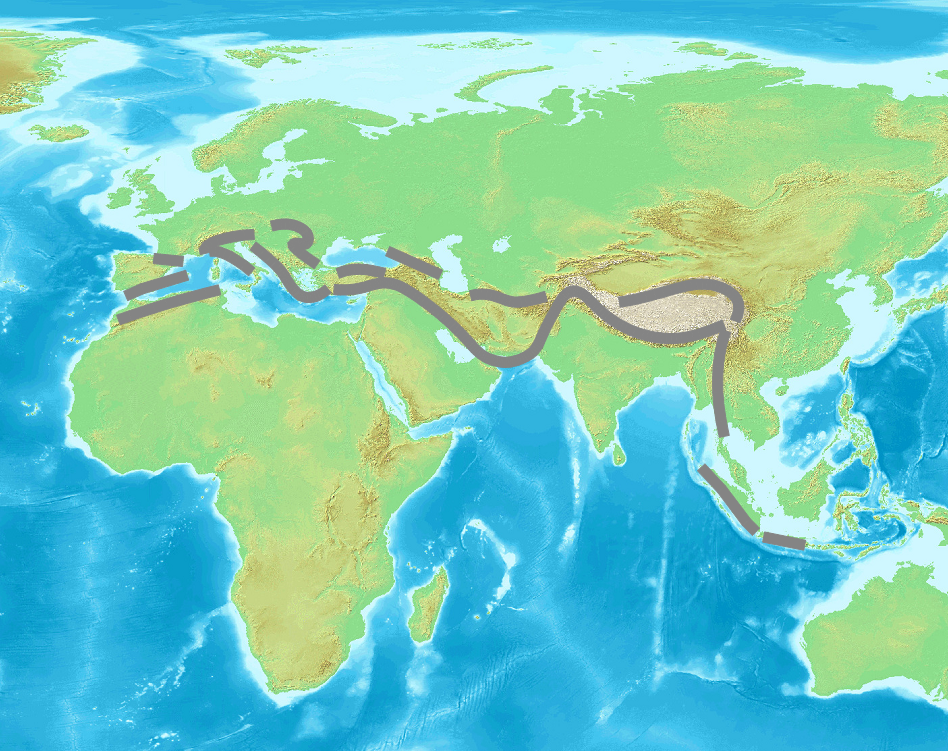 The Alpide belt runs about 15,000 kilometres, from the southern part of Eurasia through the Himalayas and into the Atlantic. Along with the Hindu Kush, it includes a number of fold mountain ranges, such as the Alps, Atlas Mountains and the Caucasus Mountains. It has been formed by the collision of a number of tectonic plates.

The earthquake in Afghanistan formed when the Indian plate crashed violently with the Eurasian plate. Collisions like this shake and squeeze the ground upwards. Along with causing earthquakes, this movement creates mountains like the Himalayas or the Hindu Kush and Pamir mountain ranges in northeast Afghanistan.

What were the effects of the Afghanistan earthquake?

The most recent figures put the death toll at 1,150 people with at least 1,600 injuries. The number of dead and injured is expected to rise as remote areas are reached and rescue workers are able to search collapsed buildings.

In the areas that have been accessed so far, as many as 1,900 homes have been destroyed including 1,028 in Giyan, 450 in Barmal and 416 in Spera. Many homes had large families of seven or more people, so the number of people affected is significant. This is well over half of Giyan’s housing stock.

As many as 10,000 more homes have been damaged extensively and risk imminent collapse. Many of the homes were comprised of mud bricks, making them very susceptible to damage and destruction. Ongoing assessments of the conditions of the housing are continuing.

At least 65 children have been orphaned or are unaccompanied in the aftermath of the earthquake.

Of the deaths, at least 155 were children, including 134 in the Giyan district, and 250 were injured. Seven schools in Khost and Paktika provinces were damaged by the earthquake (5,135 students) with additional damage reported in Gani Khil and Dor Baba districts.

The risk of communicable diseases, such as acute watery diarrhoea (AWD)/cholera, and malaria increased due to the fragile living conditions in the affected communities and high temperatures in summer. There was an upward trend of AWD cases following the earthquake (Between 3 to 10 July, a total of 464 AWD cases were reported).

What were the responses to the Afghanistan earthquake?

Since the take over of government by the Taliban in 2021, Afghanistan has experienced a humanitarian crisis, especially since many countries cut diplomatic ties with the country. The new regime has struggled to get to grips with food shortages and a flailing economy. More than a third of people cannot meet their basic needs, women’s rights have been restricted and foreign aid has evaporated.

Dr Orzala Nemat, an Afghan researcher and human rights activist based in the UK, fears that the response could quickly become chaotic without “systematic governance” structures in place since the Taliban takeover.

In a rare move, the Taliban’s supreme leader, Haibatullah Akhundzadah, who almost never appears in public, pleaded with the international community and humanitarian organisations “to help the Afghan people affected by this great tragedy and to spare no effort”.

Afghanistan’s Taliban rulers pledged not to interfere with international efforts to distribute aid to tens of thousands of people affected by the earthquake.

Humanitarian aid has continued, with international agencies, such as the United Nations, operating.

The UN Office for the Coordination of Humanitarian Affairs (UNOCHA) said Afghanistan had asked humanitarian agencies to help with rescue efforts, and teams were being sent to the quake-hit area.

On July 12, the Government of Japan decided to extend Emergency Grant Aid of 3 million US dollars to Afghanistan in response to the damages caused by the earthquake that had occurred in eastern Afghanistan on June 22. The Government of Japan offered to provide assistance in areas such as health and medical care, shelter, and water and sanitation through the International Federation of Red Cross and Red Crescent Societies (IFRC) to the Afghan people affected by the devastating earthquake.

The World Health Organisation’s polio team was on the ground joining forces with UN agencies and NGOs to ensure an effective and coordinated relief effort. The team’s invaluable experience and local knowledge gained from more than 2 decades working among local communities in both Paktika and Khost provided the foundations of an assessment tool to map communities (the Open Street Map Humanitarian team issued a request from arm-chair mappers to use satellite images to create and update maps in the area) and assess the number and extent of casualties as well as the destruction to homes and buildings. This ensured accurate data guided a focused response in the immediate aftermath, including the rapid construction of tents for shelter, as well as housing ad hoc health camps.

Polio teams turned a helping hand wherever needed including digging for survivors, building tents, unpacking trucks and distributing shipments of WHO emergency and surgical kits, medical supplies and equipment, and the heartbreaking task of preparing and assisting in transporting the dead for burial.

The WHO requested US$ 6 million for three months for health and water, sanitation and hygiene (WASH) interventions including medical supplies, rehabilitation and renovation, and essential healthcare service.

Below is the start of a collection of resources to support educating students about the earthquake in Afghanistan. Please let us know about other resources in the comments below.

If you are aware of other aid agencies providing support or are able to provide a link for donations to aid agencies please send us an email.

Below we have included links to websites that provide support in teaching events such as this in a considered way, after all, there are a number of children from Afghanistan being educated in schools outside of the country and may be in one of your classes.

Supporting young people during the initial response to a disaster

The Guardian – At least 920 dead after 6.1-magnitude quake hits Afghanistan

The Independent – Afghanistan earthquake: Death toll rises to 1,000 after tremor with 6.1 magnitude

Who will win Pooh sticks?