Mappleton lies approximately 3km south of Hornsea on the Holderness Coast, East Yorkshire. The village of around 50 properties has been subject to intense erosion at a rate of two metres per year, resulting in the access road being only 50m from the cliff edge at its closest point. Mappleton is served by the B1242, the main road connecting settlements along the Holderness Coast.

Mappleton lies upon boulder clay that is soft and erodes very quickly. This material was deposited by glaciers during the last ice age 18,000 years ago.

An overview of coastal management at Mappleton

What were the reasons for coastal management at Mappleton?

Mappleton is served by the B1242, the main road connecting settlements along the Holderness Coast. Intense erosion means the coastline is only 50m from the main road. It was cheaper to protect Mappleton than construct a new route.

The village contains around 50 properties and is home to 342 people. These properties would be lost to coastal erosion at about 2m/year without coastal defences.

What was the coastal management strategy at Mappleton?

In 1991 almost £2 million was spent on two rock groynes and a rock revetment to protect Mappleton and the B1242 coastal road. In addition, blocks of granite were imported from Norway for the sea defences.

The rock groynes trap beach material and stop it from being transported away by longshore drift. This has built up a wide, sandy beach which protects the cliffs from destructive waves.

Rock armour placed at the base of the cliffs between the groynes absorbs wave energy during storm conditions, protecting the cliffs’ base from erosion.

In addition to this, the cliffs have been reprofiled, forming gentle slopes which have been stabilised with vegetation. This has protected the cliffs from mass movement, such as slumping and mudflows which is common along this stretch of coastline.

What are the effects of coastal management at Mappleton?

The annotated image below shows the management strategies introduced at Mappleton and their implications. 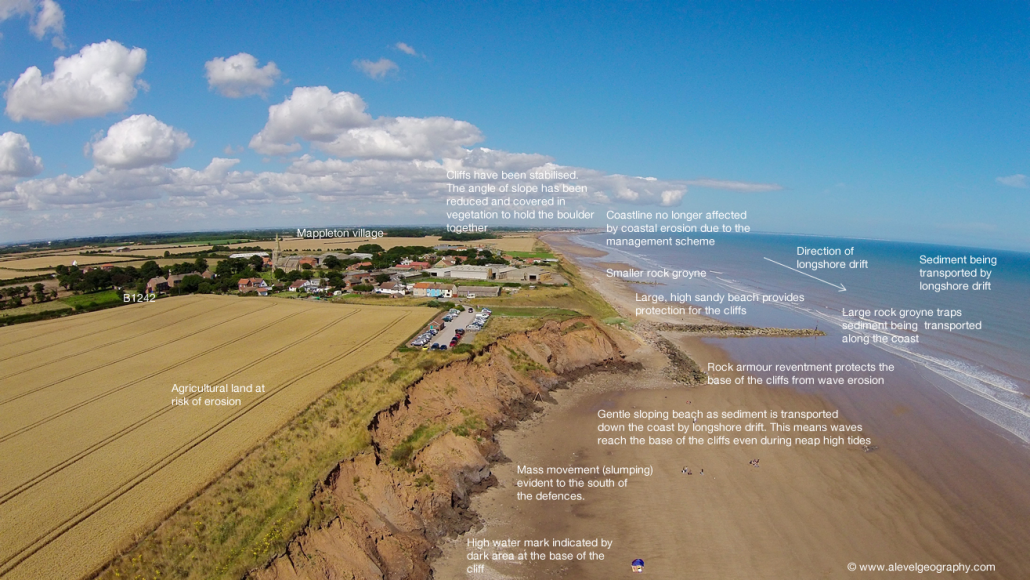 An annotated photograph shows the coastal management techniques used to protect Mappleton and their impact (click to enlarge).

The coastal defences have been effective in reducing erosion between the two groynes. As a result of these coastal management strategies, a substantial beach has been retained between the groynes halting erosion.

The B1242 has been protected along with 50 properties and businesses in Mappleton.

Local businesses have benefited from the construction of a car park and toilet facilities through the increased number of tourists, attracted by the wide, sandy beach.

Despite the coastal defences protecting Mappleton and the B1242, the erosion rate has increased significantly further south. This is because the material carried south is not being replaced (it is trapped within the groynes). Therefore there is no beach to protect the cliffs. As a result, even during a neap tide ( a tide that is 30% less than the average tidal range), the sea attacks the base of the cliffs even during neap tides. This has increased erosion and increased mass movement through slumping.

The images below compare Mappleton when the coastal defences were first installed in 1991 and 2022.

The construction of coastal defences has led to conflict between the East Riding of Yorkshire, the local authority responsible for installing the defences, and landowners at Cowden (a settlement 1 km downdrift of Mappleton). Sue Earle, the owner of Grange Farm, Cowden, has experienced increased rates of erosion (from an average of 1m to 3 m per year) since the defences were installed, leading to the loss of the farm, including her home. Despite challenging the local authority, she received little compensation for losing her business.

Although the defences have protected properties and the main road at Mappleton, this is at the expense of farmers and landowners further along the coast.

In August 2015, a large crack appeared at the top of the cliff to the south of the defences. The video compilation below shows this and the coastal defences at Mappleton.

More details of this case study can be found on our A Level sister site www.alevelgeography.com.