Storm Christoph was a slow-moving Atlantic depression, which brought a variety of weather to the UK between the 19th and 21st of January 2021. The storm system moved across the UK from west to east.

Unlike the low-pressure systems that often affect the UK at this time of year, Storm Christoph’s main threat was heavy rainfall, rather than strong winds.

The map below shows flood warnings and the places with the most rainfall from Storm Christoph. 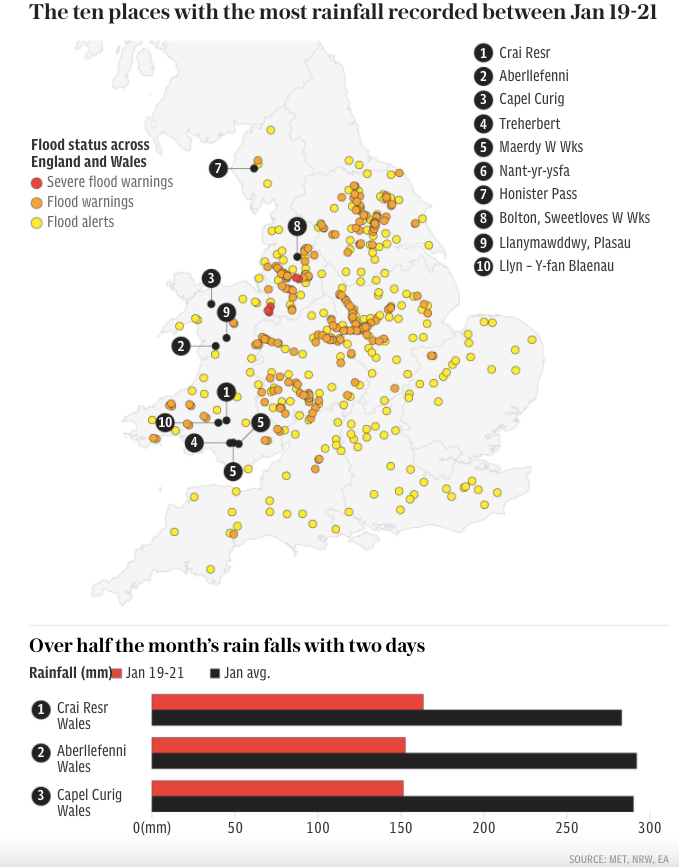 The Environmental Agency and Met Office issued a series of warnings about Storm Christoph. 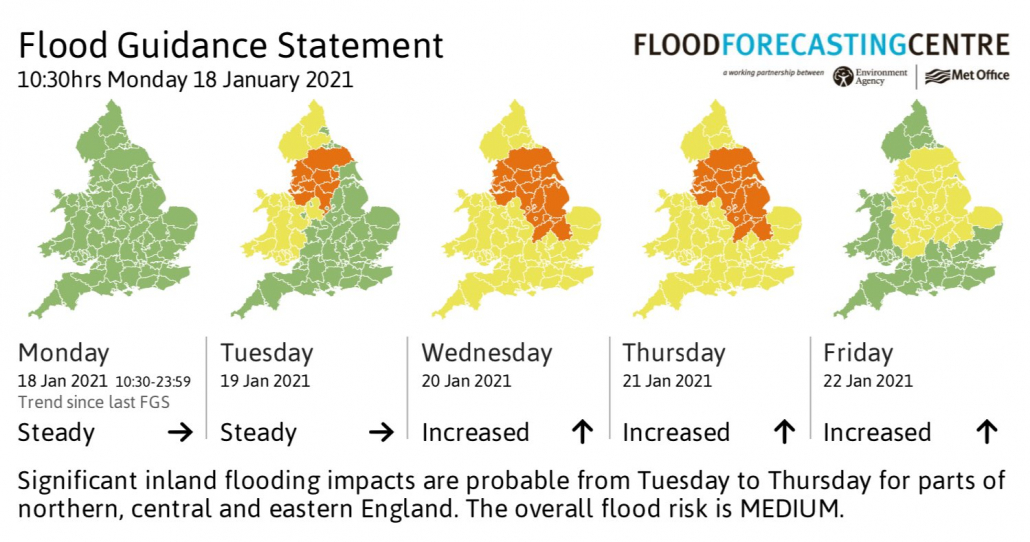 Flood Guidance Statement issued by the EA and Met Office

The Prime Minister, Boris Johnson, advised people to act if instructed to evacuate. 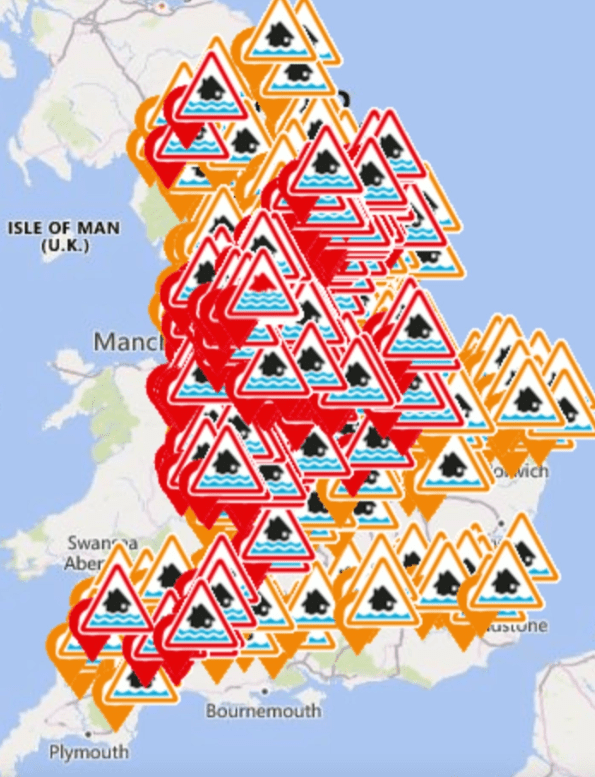 Officers from Wigan Council, Greater Manchester Police, Greater Manchester Fire & Rescue Service and health services have worked together to respond to hundreds of calls and mitigated dozens of flooding incidents this week as a result of #StormChristoph pic.twitter.com/qiTSUCzOPx

Several steps were taken to prepare areas previously affected by flooding. Fishlake, near Doncaster, was one of the worst affected areas in floods in November 2019. On Tuesday 19th January, residents readied themselves for their village to flood a second time in just over two years.

Many villagers had only been able to return to their homes for a matter of weeks, and some still haven’t managed to move back.

Doncaster Council said it had delivered 40,000 sandbags around the area since a flood alert was first issued.

Over 200 council staff in Fishlake joined with residents and volunteers to distribute sandbags days before Storm Christoph arrived, with each home receiving up to twenty.

A major incident was declared in South Yorkshire on Monday, with more than 40,000 sandbags distributed in flood-risk areas and a barrier built around a Covid vaccination centre in Mexborough.

In South Yorkshire, some roads were closed due to flooding, but no major incidents were reported. Flood wardens said improved flood defences and a changing forecast lessened the storm’s impact.

What were the effects of Storm Christoph?

Areas of the UK was hit by heavy rain, snow and flooding that has led to towns and villages being cut off and a major incident declared in South Yorkshire and Greater Manchester.

The northwest of England and the north of Wales were some of the worst affected areas as properties submerged as rivers burst their banks, and drainage systems failed to cope with the torrential downpours brought by Storm Christoph.

#StormChristoph is expected to bring up to 200mm of rain for parts of the UK this week. Stay in touch with the forecast here: https://t.co/iy7JDPLcWC pic.twitter.com/Bp4aKVCi9A

The Cheshire village of Lymm, a village of 12,000 people located 7 miles away from Warrington, experienced flooding. However, this was not on the same scale as the floods of November 2019. Although fewer than a dozen homes were submerged in the end, for many of those, it was the second such disaster in less than two years.

Around 400 homes were flooded as a result of Storm Christoph, the Environment Agency has confirmed.

Around 26,000 homes were protected from the various flood defence assets distributed by the Environment Agency. 600 people were on the ground, putting up temporary barriers, using pumps in Manchester areas with particular flood challenges.

Firefighters and police evacuated 2,000 homes and businesses in south Manchester on January 20 with 3,000 properties said to be at risk. 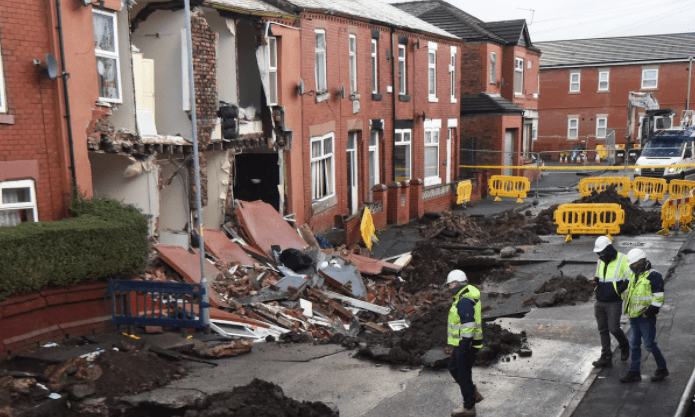 In Maghull in Merseyside and Ruthin, North Wales, families were also forced out of their homes due to rising floodwaters.

Travel suspensions were placed on services from Carlisle to Skipton or Maryport, all destinations from Rotherham Central, and between Manchester and Newton le Willows.

In South Wales, water built up in a mine shaft causing a “blow out” that flooded properties in Skewen, Neath Port Talbot. At least 80 people had to leave their homes in the village after flooding.

North Yorkshire County Council said more than 15,000 sandbags were at the ready around the county.

Flood plains near Cawood in North Yorkshire, have been storing vast amounts of water as rivers rose rapidly following Storm Christoph’s heavy rainfall. These are shown in the video below.

A Covid-19 testing centre at Meadowhall in Sheffield was closed until Friday 22nd January due to the risk of flooding.

As water moves through drainage basins, monitoring is ongoing in low-lying areas.

Insurance losses from Storm Christoph are predicted to be between £80million and £120million.

How do I install Mote to give verbal feedback in Google apps?

Creating an exam paper in Microsoft Forms
Scroll to top