On Friday 19th March 2021, a volcanic eruption began in south-west Iceland, near the capital, Reykjavik. The eruption near Mount Fagradalsfjall, about 20 miles southwest of Reykjavik, took place at 8:45 pm local time. Molten rock breached the surface in a valley near a flat-topped mountain named Fagradalsfjall (beautiful valley mountain), in the region of Geldingadalur (Dale of the Geldings), six miles from the nearest town.

Immediately following the eruption, Iceland’s prime minister Katrín Jakobsdóttir announced on Twitter, “A volcanic eruption has begun in Fagradalsfjall on the Reykjanes peninsula. We are monitoring the situation closely, and as of now, it is not considered a threat to surrounding towns. We ask people to keep away from the immediate area and stay safe”.

In the four weeks leading to the eruption, more than 50,000 earthquakes occurred on the peninsula, a huge jump from the 1,000-3,000 registered each year since 2014. Several of these earthquakes exceeded magnitude 5.

The eruption occurred on the Reykjanes Peninsula in Gledingadalur valley, close to Fagradalsfjall, a mountain 20 miles south-west from the capital, Reykjavik. Sitting on a landward portion of the continuously spreading Mid-Atlantic Ridge is no stranger to earthquakes. But since late 2019, they have become more frequent and more energetic. Icelanders on the peninsula, particularly those in the coastal town of Grindavík, have had trouble sleeping lately due to the constant shaking. 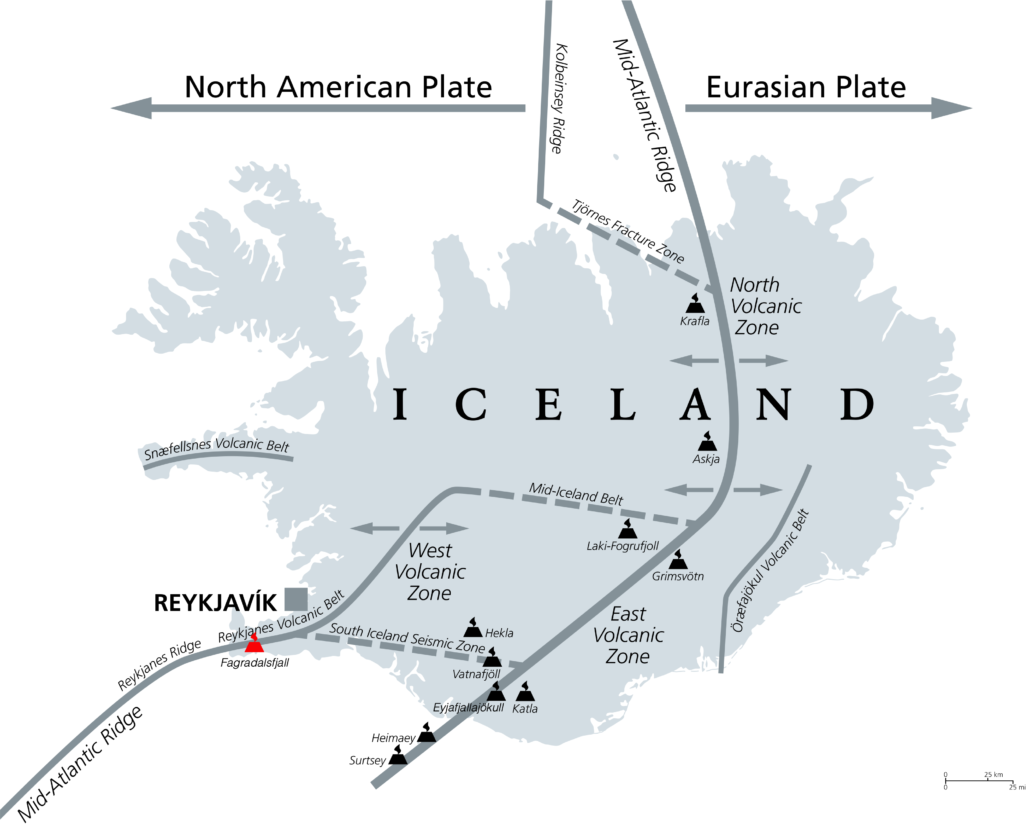 Close up view on the fracture tip from where the magma is erupting #Reykjanes pic.twitter.com/NGXASVjfK2

Local people were alerted to the eruption when a series of small lava fountains turned the night sky red.

Meteorologists said the eruption was small. The area is uninhabited, so the eruption is not expected to present any danger. Lava is trapped within the Geldingadalur valley, which needs to fill with lava at least 25 to 30 metres thick before it pours out of the valley. 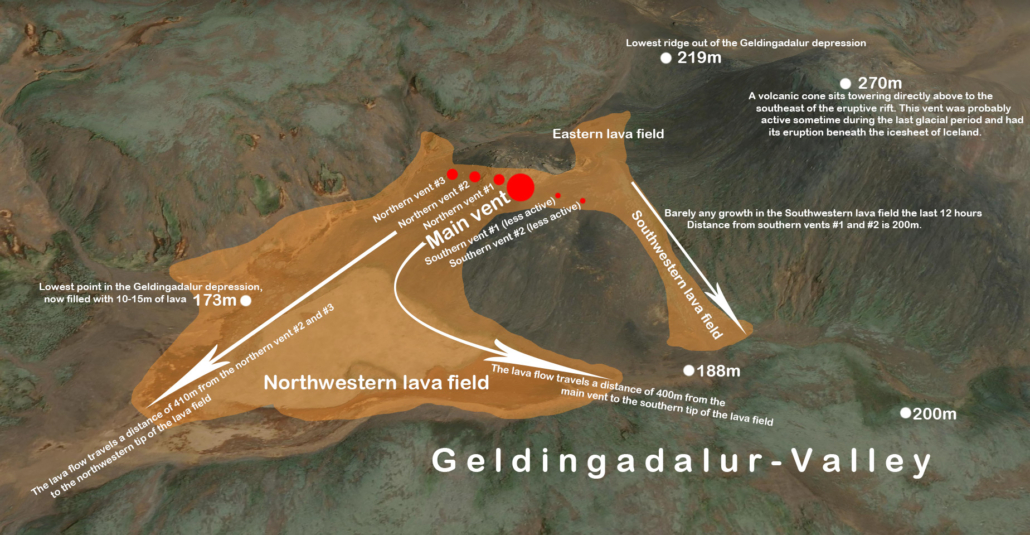 The main hazard from the eruption is the potential danger of sulphur dioxide gas.

One image was taken every 10 minutes over a 4 hour period on the afternoon of Sunday 21st March 2021. Source images from www.ruv.is

The eruption is the first in this part of Iceland — the Reykjanes Peninsula, home to Reykjavik, where most of the country’s residents live, in 781 years. And it was the first time this particular volcano had erupted in about 6,000 years.

Experts say around 300,000 cubic metres (10.5 million cubic feet) of lava have poured out, but the eruption is deemed to be relatively small and controlled.

Lava first poured out of a meandering fissure, however over the weekend, the eruption focused its output on a single spot, building a steep, towering cauldron of freshly cooled rock. Smooth rivers of lava crept around blockier, rubble-like lava. Lava flowing at a steady pace caused the cone to suffer a few partial collapses as it flung blobs of lava across the scorched earth.

Ejected molten lava lands on the sides of the vent and solidifies, and over time builds a cone around the vent. This is typical of effusive fissure eruptions of basaltic lava. The spatter cone is relatively weak and is susceptible to collapse. When this occurs, large volumes of lava flow out of the vent rapidly as now unconfined lava. These events are unpredictable and can immediately change the direction and speed of a lava flow, as shown. The video below features the partial collapse of the spatter cone.

The tourists below put themselves at risk by getting so close to the spatter cone. 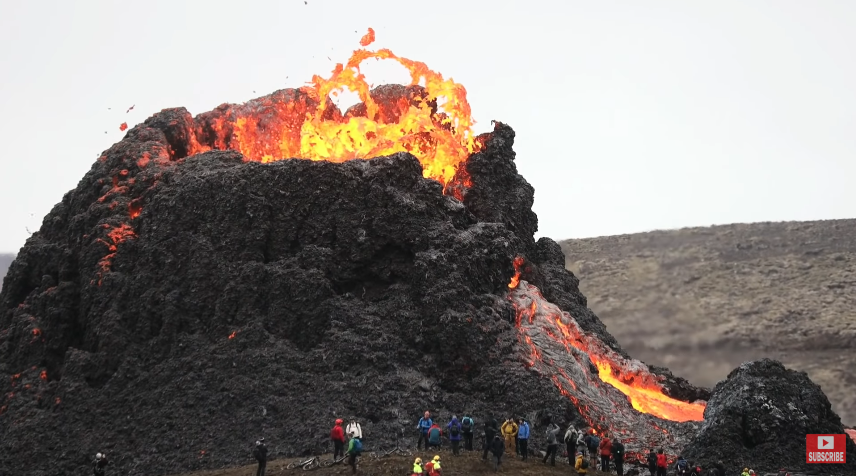 Tourists close to the spatter cone.

The site was initially blocked off, but from the afternoon of Saturday 20th, March 2021, people were allowed to make the trek. People hiked to the area over the weekend to witness the eruption up close, and local helicopter companies are offering tours from Reykjavik. 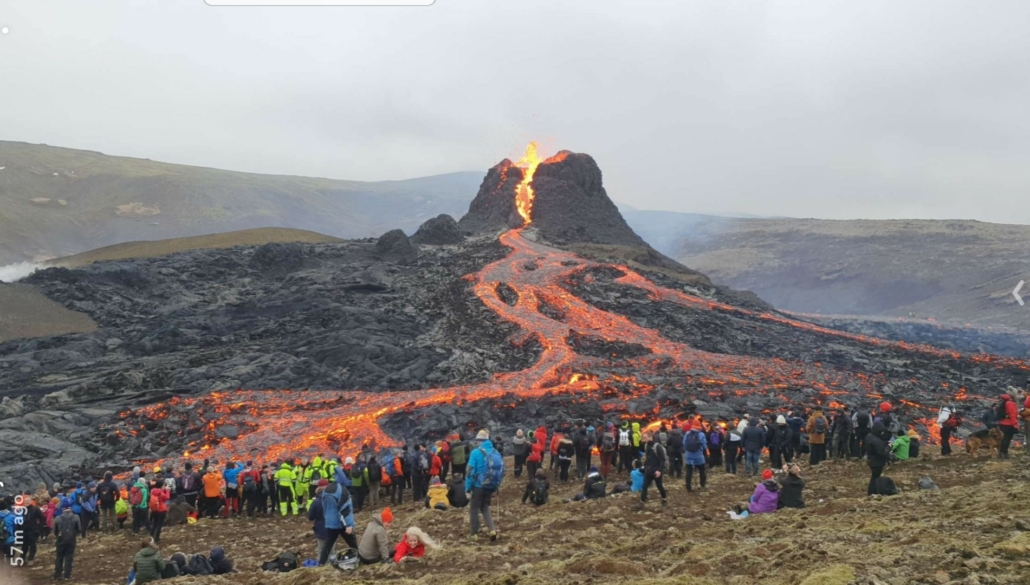 By Monday, the site was blocked again due to high gas pollution levels and poor weather conditions. Emergency services had to rescue several people from the area on Sunday evening.

Now that magma has reached the surface, the earthquakes have mostly subsided.

On Wednesday, 24th April, the main cone was joined by another large cone, formed when two smaller ones merged. 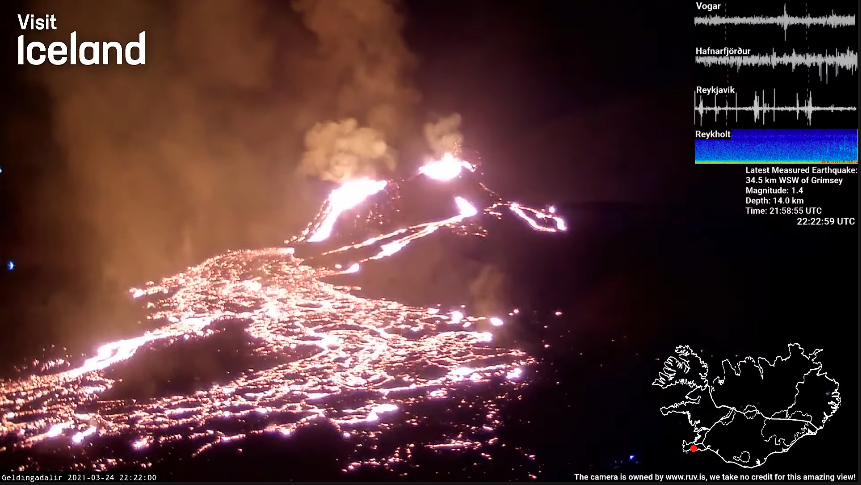 Iceland frequently experiences earthquakes and volcanic eruptions because it sits between two tectonic plates (the North American and Eurasian plate), moving in opposite directions, forming a constructive plate margin.

Geologists describe the eruption as “effusive”, in which lava flows out of the volcano onto the ground, as opposed to “explosive”, wherein magma is violently fragmented and rapidly expelled from a volcano.

Scientists suggest the heightened volcanic activity represents a transition from a gradual opening of the Mid-Atlantic rift to a considerably more dramatic phase when both sides of the Reykjanes Peninsula are rapidly pulled apart. When a geologic rift quickly pulls the land apart like this, it creates a space, and magma rushes up to fill it in.

Scientists on site made use of nature to cook up a meal!

Unlike the eruption in 2010 of the Eyjafjallajökull volcano, which halted approximately 900,000 flights and forced hundreds of Icelanders from their homes, this eruption is not expected to spew much ash or smoke into the atmosphere.

Below are resources covering the current eruption of Fagradalsfjall, Iceland.

Geography in the News

Iceland shaken by more than 50,000 earthquakes in three weeks

A great video introduction to the eruption, featuring monitoring before the eruption – BBC News

A video report overview – The Guardian

Take a look at this 360° image of the volcano, which clearly puts its site in context.

Close-up footage of the eruption.

Iceland, yesterday. A peek into the inferno of our Earth.

Close up view on the fracture tip from where the magma is erupting #Reykjanes pic.twitter.com/NGXASVjfK2

The eruption that started on Friday 19th March 2021 near Iceland’s capital Reykjavik seems to be subsiding, scientists say. – BBC News – update: they clearly got this wrong!