Europe’s most active volcano, Mount Etna, has been hitting the headlines recently after a series of spectacular eruptions. In Etna’s first eruption of 2021, explosive lava fountains reached over 1500 m in one of the most amazing eruptions in decades. 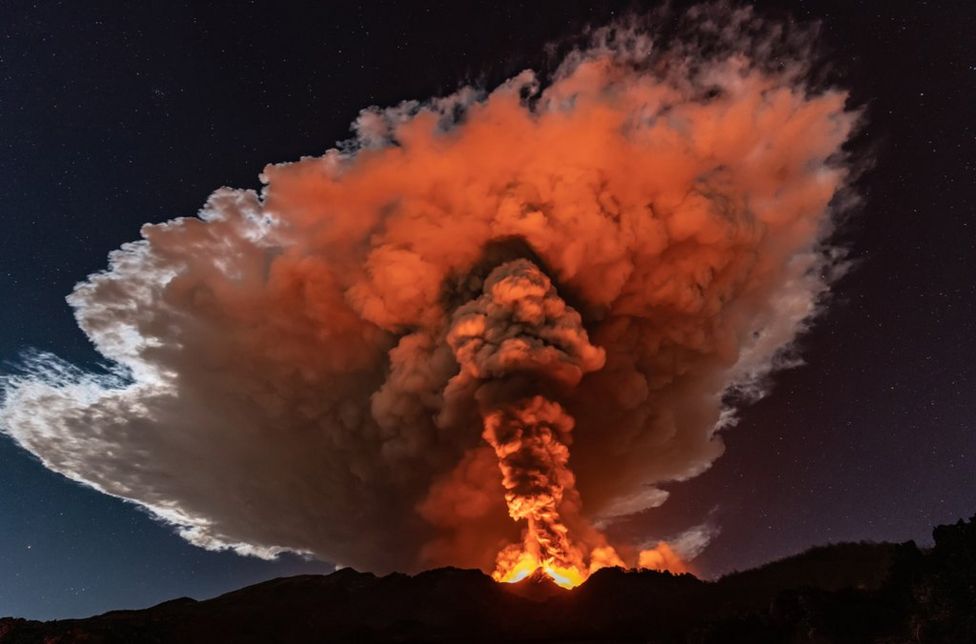 Mount Etna, located on the island of Sicily, has been largely dormant for the past two years. The stratovolcano (composite) dominates the skyline of the Italian island, where it sits on the eastern coast.

Located between the cities of Messina and Catania, it is the highest active volcano in Europe outside the Caucasus – a region between the Black Sea and the Caspian Sea – and the highest peak in Italy south of the Alps.

The recent activity is typical of a strombolian eruption among the normal activities of the more than 3,300-metre-high volcano. The recent eruption is the strongest explosion in the southern crater since it was discovered in 1971.

On Monday 22nd February 2021, at around 11 pm, the lava fountains, surrounded by gigantic clouds of smoke, exceeded 1,500 metres (4,900ft) in height, while thousands of rock fragments, some the size of fridges, were thrown from the crater into the sky for several kilometres.

Etna is a hyperactive volcano with over 3,500 years of historically documented eruptions. The volcano has been erupting on and off since September 2013. Since September 2019, it’s been erupting from its various summit craters virtually continuously. In December 2020, Etna’s explosive activity and lava output began to spike, and in February 2021, it has been launching fluid lava skywards.

Etna is an unusual volcano in that it can produce explosive eruptions of runny lava and release slower flowing, thick lava flows. Scientists are still trying to work out why this is the case.

The magma from the latest eruption appears to be coming up from deep within the mantle. Extremely hot, fluid magma is rapidly rising through the network of conduits within and below the volcano. However, there is another factor that is contributing to the current explosive eruptions.

There are high quantities of water vapour in Etna’s magma, which makes it explosive. The water does not cool the magma. As the molten magma approaches the surface, the pressure drops, and the bubble of water vapour expands violently, leading to lava being ejected out of the volcano.

Following each explosive lava fountain, less gassy magma lingers just below the vent. This is then cleared when a new volley of gassy magma rises from below. These explosive eruptions are known as volcanic paroxysms.

Authorities have reported no danger to the nearby towns, however, local airports have been temporarily closed, as has the airspace around the volcano. Etna’s last major eruption was in 1992. Despite the explosive nature of the recent eruption, there is no risk to the population, other than from the ash that covers buildings and smoke that can, after a few hours, cause breathing problems. In March 2017 vulcanologists, tourists and a BBC film crew were injured during an eruption when a flow of lava ran into snow, producing superheated steam that sent fragments of rock flying in all directions.

For a Volcanologist Living on Mount Etna, the Latest Eruption Is a Delight – Advisory – this article contains expletives (swear words).

Thoughts on Catch Up