The La Soufrière volcano erupted on Friday 9th April 2021, for the first time since 1979 on the Caribbean island of St Vincent. The eruption blanketed the island in an ash layer and forced some 16,000 people to evacuate their homes.

The volcano had been dormant since 1979, but in late 2020 it started spewing steam and smoke and making rumbling noises.

The first sign that an eruption was imminent came on Thursday evening when a lava dome became visible on La Soufrière. Just before 09:00 on Friday (13:00 GMT), seismologists from the University of the West Indies confirmed that an “explosive eruption” was underway. 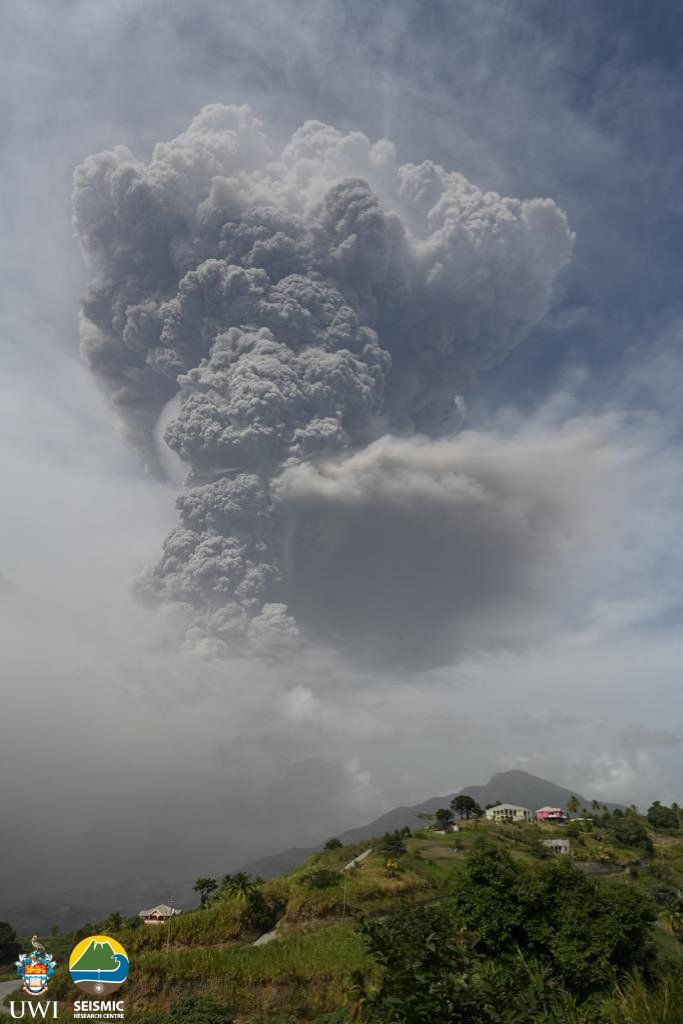 The ash plume from the first eruption reached 20,000ft and drifted eastwards over the Atlantic Ocean.

There were no immediate reports of casualties.

White-coloured dust covered buildings and roads around the island, including in its capital Kingstown.

Ash had begun to harden on the ground after overnight showers, and many homes were still without water and electricity. However, some residents said power had been restored by midday local time (16:00 GMT) on Sunday 11th April.

The volcanic activity has threatened water and food supplies, with the government forced to drill for fresh water and distribute it via trucks. Water supplies to most of the island had been cut off, and its airspace closed because of the smoke and thick plumes of volcanic ash moving through the atmosphere.

In the early hours of Monday 12th April 2021, a huge explosion generated pyroclastic flows down the volcano’s south and south-west flanks.

What caused the eruption of the La Soufrière volcano?

The La Soufrière volcano’s eruption is significantly different from the ongoing eruption near Mount Fagradalsfjall, Iceland. Volcanoes in the Eastern Caribbean are mainly steep-sided and roughly conical in shape. They consist of alternating layers of solid lava (magma that has reached the Earth’s surface) and broken fragments of lava called pyroclastic rocks. Since they are layered, they are called composite or stratovolcanoes.

The Earth’s crust is made up of slabs of material called plates which move relative to each other. The Eastern Caribbean islands lie on a plate boundary. The North American Plate, which is the denser of the two, sinks beneath the Caribbean Plate creating suitable conditions for magma to be produced. The magma then rises to the surface of the Earth where it may erupt to form a volcano. This process is called subduction and this is how the volcanic islands of the Eastern Caribbean were formed. The diagram below demonstrates the subduction process. 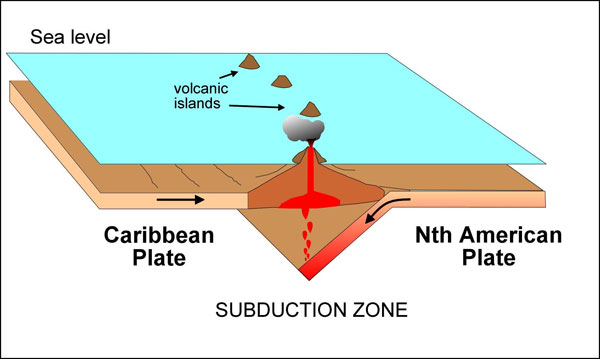 Scientists warned in December that La Soufrière had become more active than it had been for years, with monitors reporting tremors, gas emissions, the formation of a new volcanic dome and changes to its crater lake.

Immediate responses to the eruption

The prime minister, Ralph Gonsalves, issued a mandatory evacuation order on Thursday 8th Arpil, 2021 for about 16, 000 people living in the northern part of the island, but an unknown number have remained behind and refused to move.

The country’s National Emergency Management Organisation (Nemo) confirmed on Twitter that the 4,049-foot volcano had erupted on Friday morning and warned residents to leave the surrounding areas.

Around three thousand residents slept in governement-run emergency shelters since Friday 9th April, 2021. Cruise ships were also been readied to take evacuees to nearby islands. Evacuees will need to be vaccinated for Covid-19 before they are allowed to board a cruise ship or are granted temporary refuge in another island.

Homes across the island, which has a population of around 110,000, have been covered in white-coloured volcanic dust and rock fragments. It prompted warnings from officials to stay indoors, while emergency groups advised caution for those suffering from respiratory problems.

Residents in Barbados, nearly 200km (about 124 miles) to the east, were also been urged to stay indoors. People on the island of St Lucia, which is around 76km north of St Vincent, have been warned to expect air quality to be affected, with harmful gases potentially making it harder to breathe for people with asthma conditions.

Other Caribbean countries, including Antigua and Guyana, have offered to send emergency supplies to St Vincent. They also said they would open their borders to those fleeing the fallout from the eruption. Cots, tents, water tanks and other basic supplies flooded into St Vincent as nearby countries rushed to help those affected by the eruptions.

The Barbados Defence Force has been deployed to St Vincent to provide humanitarian assistance as part of a disaster response mission, the Caribbean Disaster Emergency Management Agency said.

The Barbados Defence Force (BDF) deployed a contingent as part of the Regional Security System’s (RSS) humanitarian assistance and disaster response (HADR) mission to St Vincent and the Grenadines (SVG) in the aftermath of the La Soufrière volcano eruption. pic.twitter.com/R1NInZYaSU

Victoria Hospital has been transformed to become the Respiratory Hospital, and is treating Covid patients,” she said, adding: “So technically, persons suffering from the effects of ash inhalation would be on the wards with Covid patients.”

More than 130 people who were due to leave St Vincent for Canada had to be taken by ship to St Lucia on Saturday after becoming stranded when their flight was cancelled.