Withernsea is a town located on the Holderness Coast in the East Riding of Yorkshire.

The front of Withernsea has extensive coastal defences including a sea wall, groynes and rock armour. To the south of Withernsea, the sea defences have been extended several times using rock armour. Beyond the sea defences, rates of erosion have increased because beach material is not being replaced as groynes trap sediment being transported by longshore drift along the front of Withernsea. As the beach in this area is very gently the North Sea reaches the base of the cliffs even during neap tides, leading to increased cliff erosion. This stretch of land is some of the most rapidly eroding along the Holderness Coast. 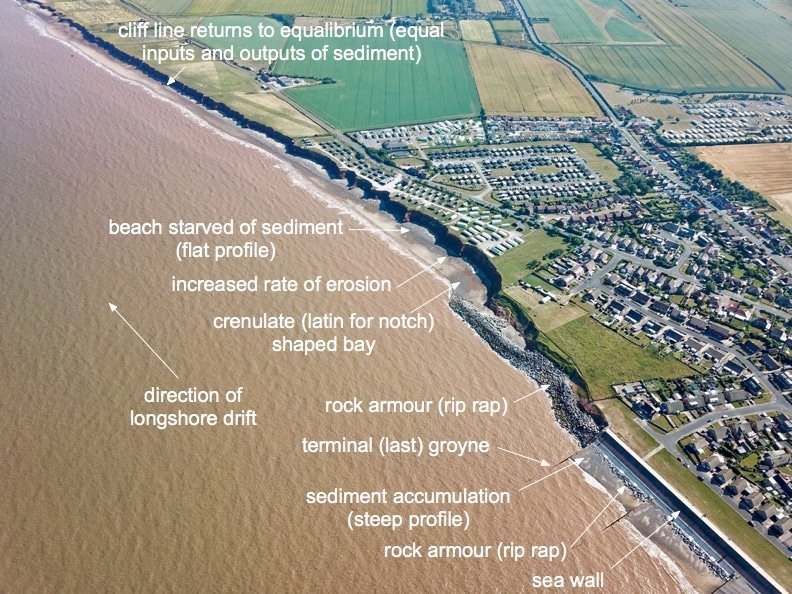 The increased rate of erosion has led to the rapid loss of land, particularly along the front of the Golden Sands Holiday Park. More than 20-holiday homes have had to be either demolished or moved in the last few years. Also under threat is the main road connecting the village of Holmpton to the town of Withernsea.

Erosion on this section of the Withernsea coastline has historically been at an average of around 4m per year, but in recent years this has increased to approximately 6m per year in places, with 2019 seeing around 12m of erosion opposite the frontage of the Golden Sands Holiday Park.

Erosion at Golden Sands Holiday Park between 2018 and 2020

To protect Holmpton Road, local houses and businesses being lost to coastal erosion, new sea defences have been installed. Four hundred metres of rock armour has been installed along this stretch of coast. During 2020 just under 70,000 tonnes of anorthosite, a rock similar to granite, was transported from Norway to the site off Golden Sands Holiday Park.  The project will protect about 70 homes and more than 250-holiday chalets and static caravans.

A £3m grant, which allowed the £7 million scheme to go ahead after other bids had failed, was provided by the European Regional Development Fund at the end of 2019.

The rock was transported from the quayside quarry in Rekefjord, on the southern coast of Norway, in 5000-tonne shipments by barge. The rocks were then dropped from the barge using heavy machinery when weather conditions were favourable. When the tide went out the rock was then transported up the beach. 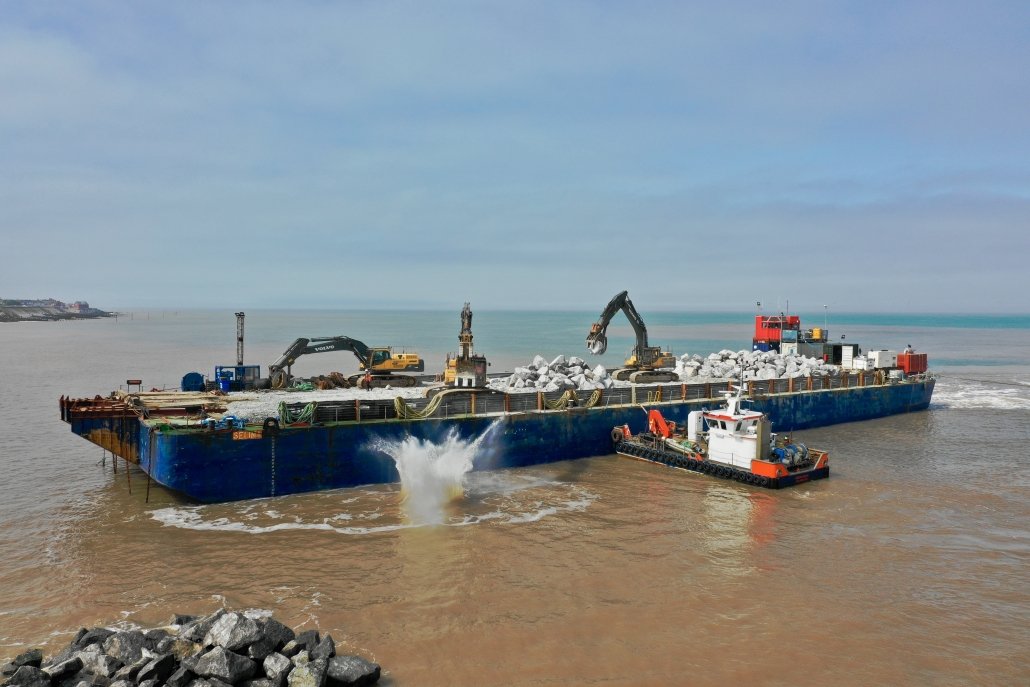 Rock being dropped from a barge

The majority of the rocks weigh between six and ten tonnes, but some reached as much as fifteen tonnes. The boulders were used to create an interlocking rock structure, designed to prevent the sea from eroding the cliffs. This is thought to be amongst the largest used in such defences around the UK.

Rocks of this size were required to withstand the rough seas that this stretch of coastline can experience, both now and in future, should climate change produce the expected worsening of sea conditions. Rock armour is an interlocking but porous structure that has proven to be effective at withstanding wave action, which is the primary cause of the areas rapid coastal erosion.

The cliffs to the south of Withernsea have been re-profiled, and rock armour has been placed onto the newly gently sloping cliffs and along their base. 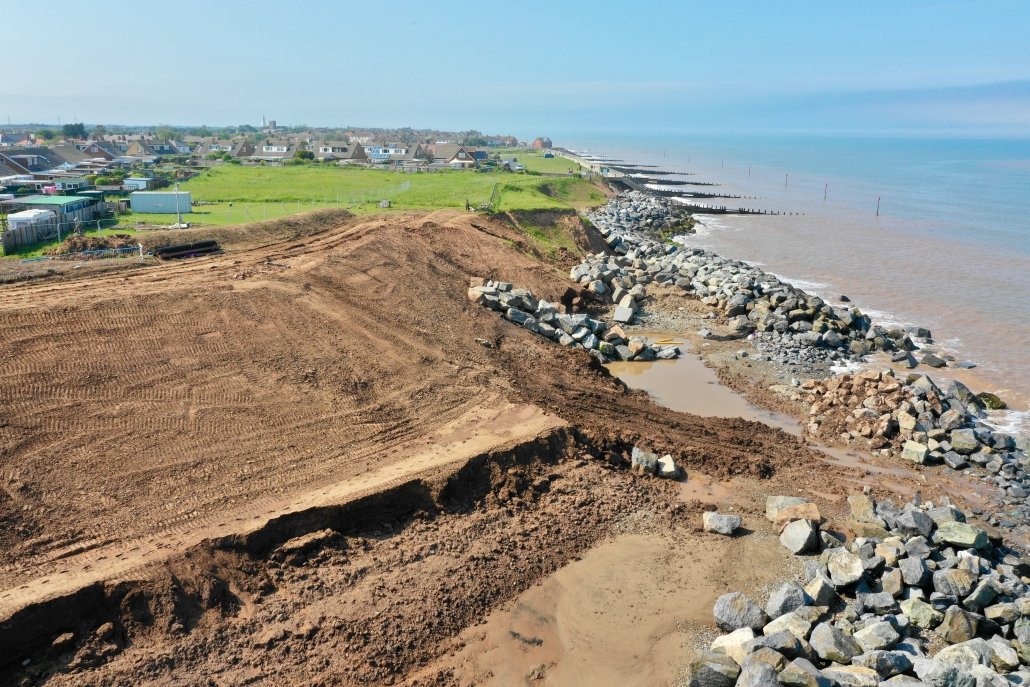 Cliff reprofiling and the first installation of rock armour 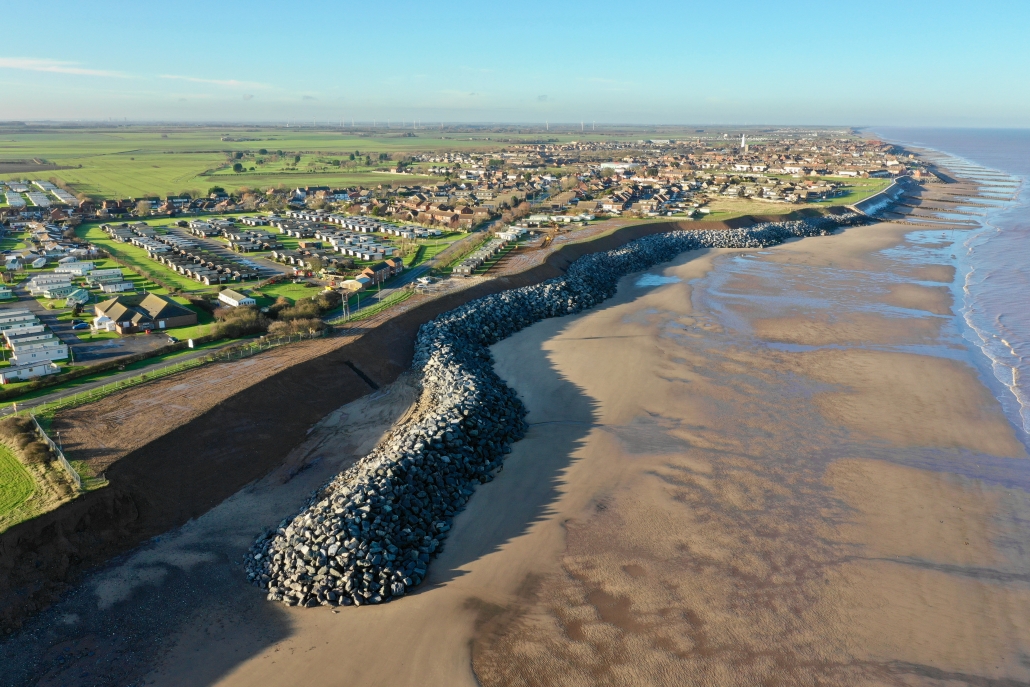 It may take some time for aerial images on Google Maps to update to include the new rock armour at Withernsea, However, the image below shows the beachside outline of the new defences. In some places, the rock armour is 30m wide! 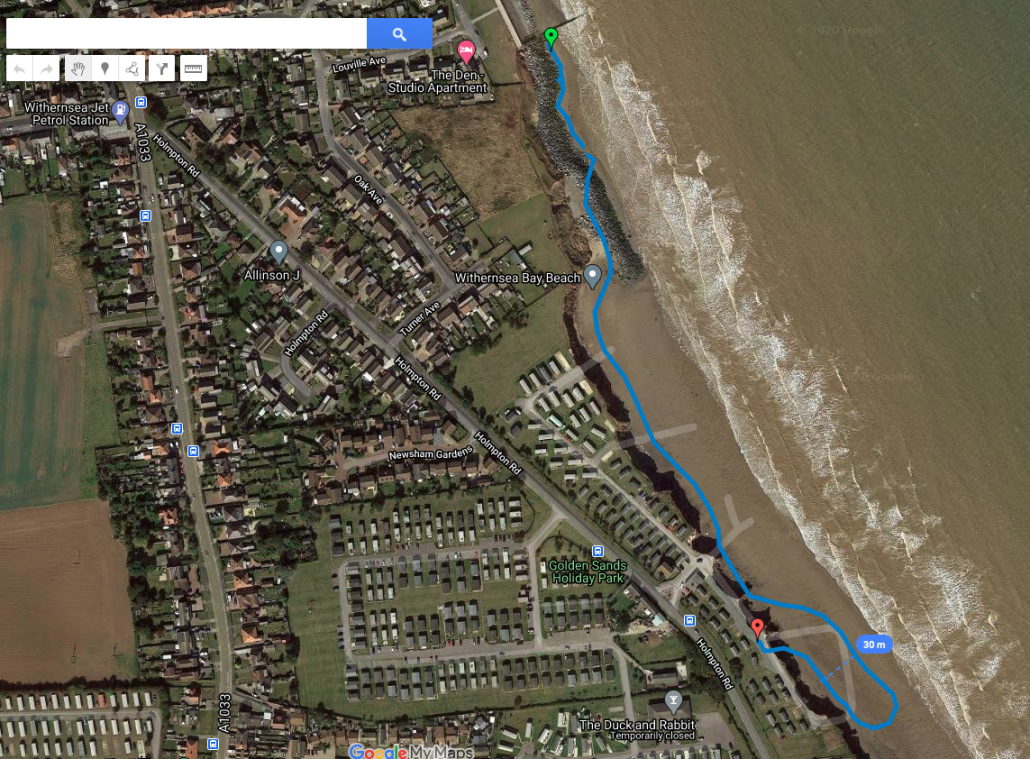 GPS outline of the new defences at Withernsea

Rates of erosion are expected to increase to the south of the new defences. 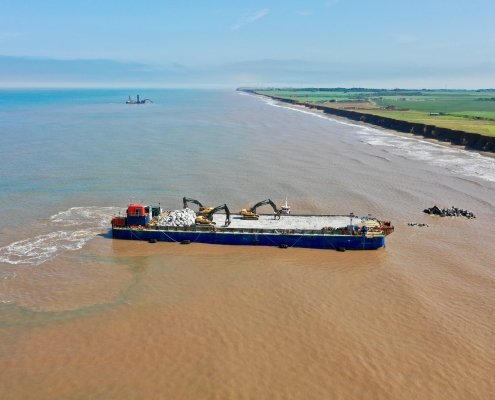 Barge and support craft at Withernsea 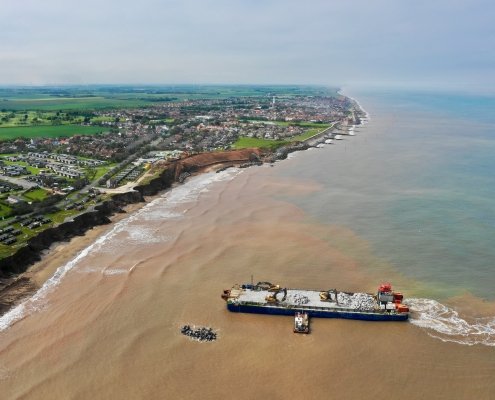 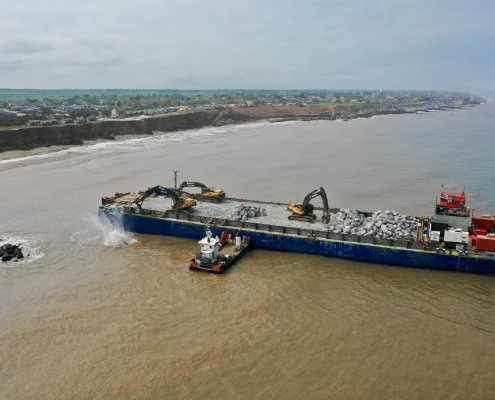 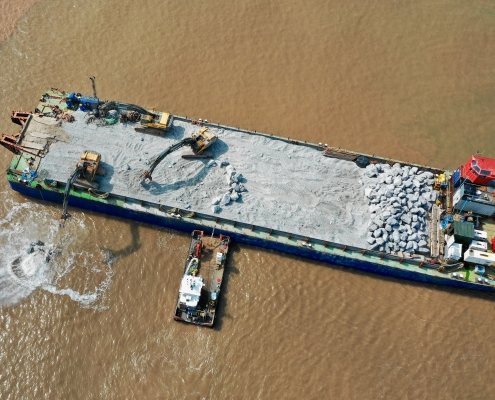 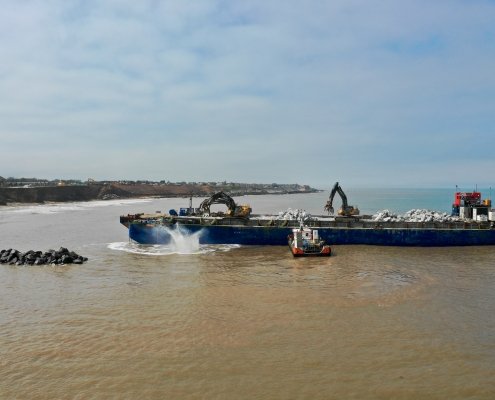 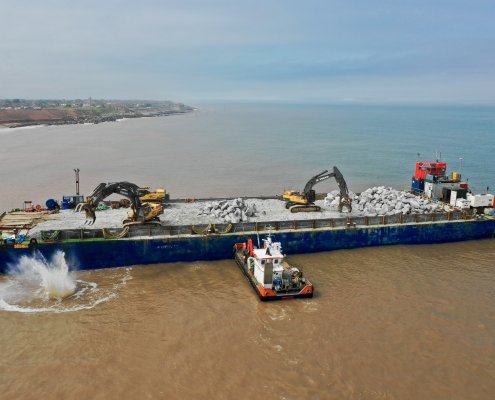 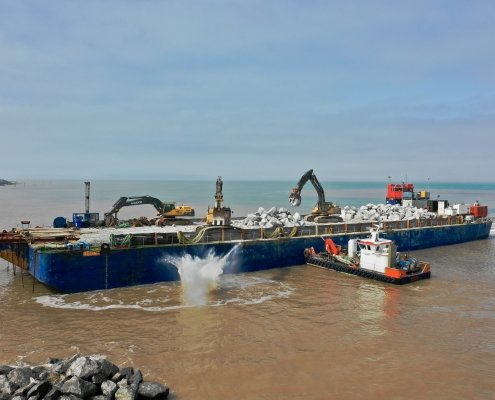 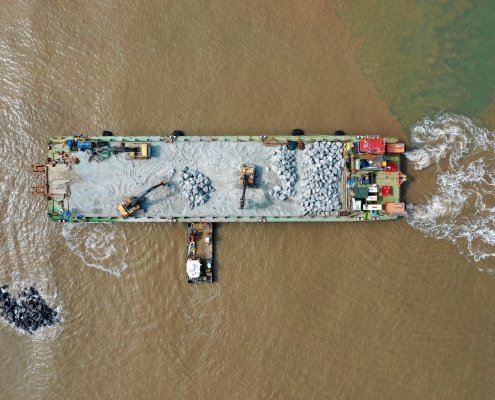 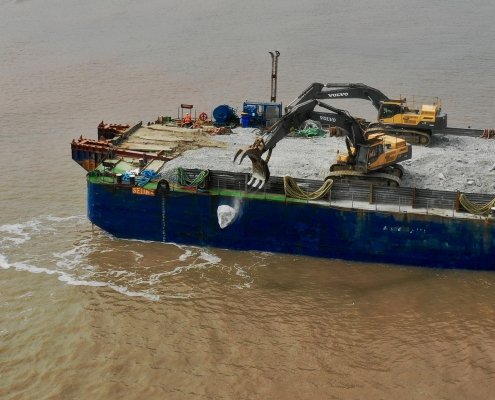 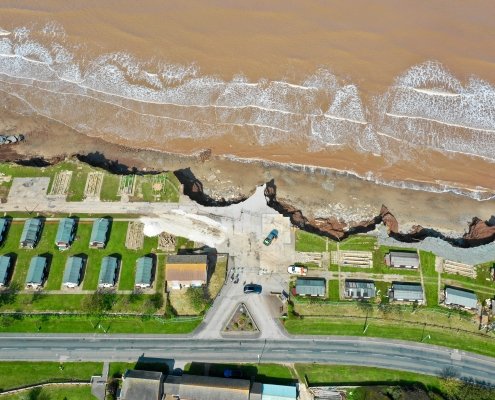 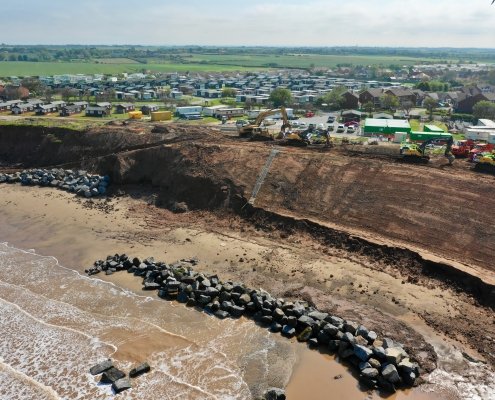 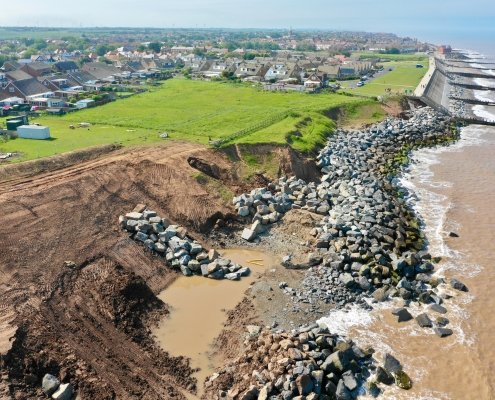 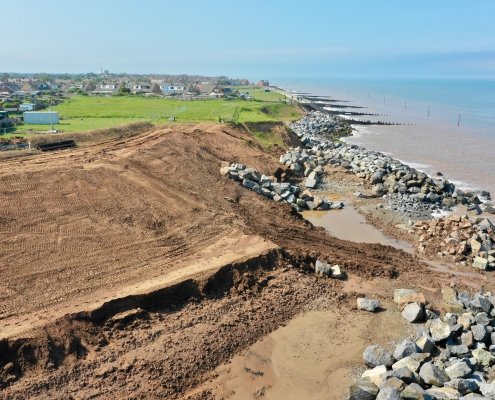 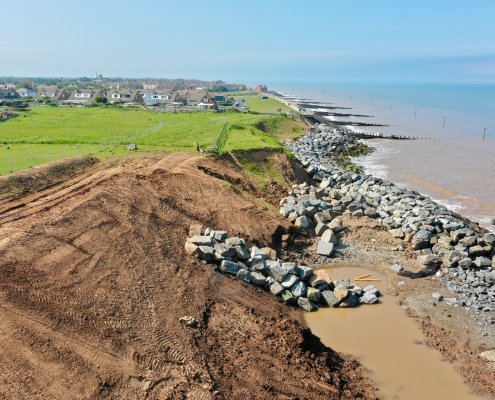