Where is Montserrat?
Montserrat is a small tropical island of approximately 40 sq. miles in the Caribbean, fifteen minutes flying time from Antigua. It is a British Overseas Territory and relies on UK Government aid money to survive. It is of volcanic origin with the Soufrière Hills above the capital of Plymouth the highest point of the island.

How and when did the volcano erupt?
Prior to 1995 the volcano in the Soufrière Hills had been dormant for 350 years but on the morning of 18th July 1995 steam and fine ash could be seen coming from the flanks of the Soufrière Hills accompanied by a roaring sound, described as being like a jet engine. In the capital of Plymouth there was a strong smell of ‘bad eggs’ the hydrogen sulphide being emitted by the awakening volcano.

Montserrat was totally unprepared. No-one had ever imagined the dormant volcano would erupt. The Soufrière Hills was the breadbasket of the island where farmers worked the fertile agricultural land, while the busy capital and island port of Plymouth nestled at the foot of the hills.

Scientists arrived from the University of the West Indies to assess the situation. They said the volcano was producing ‘acoustic energy explosions’ at approximately half-hour intervals sending ash and vapour three to four hundred metres into the air.

What happened next?
Before July 1995 Montserrat was a thriving tourist destination with a population of 10,000 people but over several weeks there was a mass exodus from the island and a run on the banks with people withdrawing cash.

Several areas near the vent that had opened up in the hillside were declared exclusion zones and residents were evacuated to the safe north of the island into schools and churches.

It was evident the volcano was becoming more active when a series of small earthquakes shook the island. Heavy rain from passing hurricanes brought mudflows down the hillsides into Plymouth. Sulphide dioxide emissions increased, a sure sign of heightened activity.

The scientists hoped to be able to give a six hour warning of any eruptive activity but when they discovered the magma was less than 1 km below the dome they said this could not be guaranteed, saying there was a 50% chance of an imminent eruption. An emergency order was signed by the Governor and new exclusion zones were drawn with people evacuated north.

The years 1995 to 1997
The Soufrière Hills volcano became increasingly active and more dangerous.

Montserrat Volcano Observatory (MVO) was established to monitor activity and advise the Government.

December 1995 saw the first pyroclastic flow from the volcano.

The capital of Plymouth was evacuated for the last time in April 1996.

Two-thirds of Montserrat became the new exclusion zone, including the fertile agricultural land.

Population dropped to 4,000 with residents leaving for UK or other Caribbean islands.

On the seismic drums at the MVO swarms of small hybrid earthquakes frequently registered. Also volcano-tectonic earthquakes (indicating fracture or slippage of rock) and ‘Broadband’ tremors (indicating movement of magma). 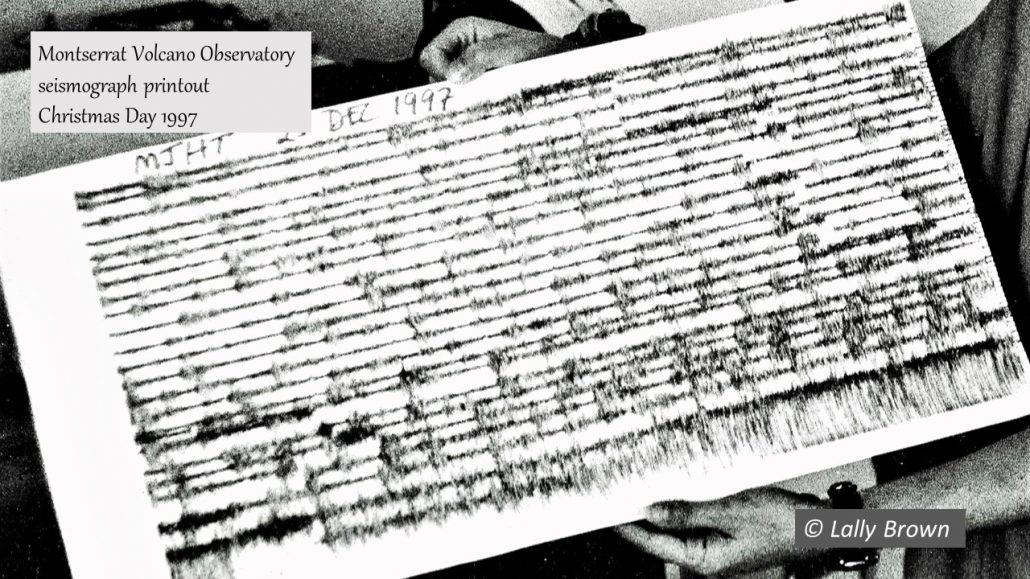 ‘Spines’ grew rapidly out of the lava dome to heights of up to 15 metres before collapsing back.

Rainfall caused dangerous mudflows down the flanks of the Soufrière Hills.

Temporary accommodation was built to house evacuees living in churches and schools.

25th June 1997 Black Wednesday
For a period of twenty minutes at 12.59 pm the volcano erupted without warning with devastating consequences. A massive pyroclastic flow swept across the landscape and boulders up to 4 metres in diameter were thrown out of the volcano. Over 4 sq.km was destroyed including nine villages and two churches. The top 300ft had been blown off the lava dome. Tragically nineteen people were caught in the pyroclastic flow and died. 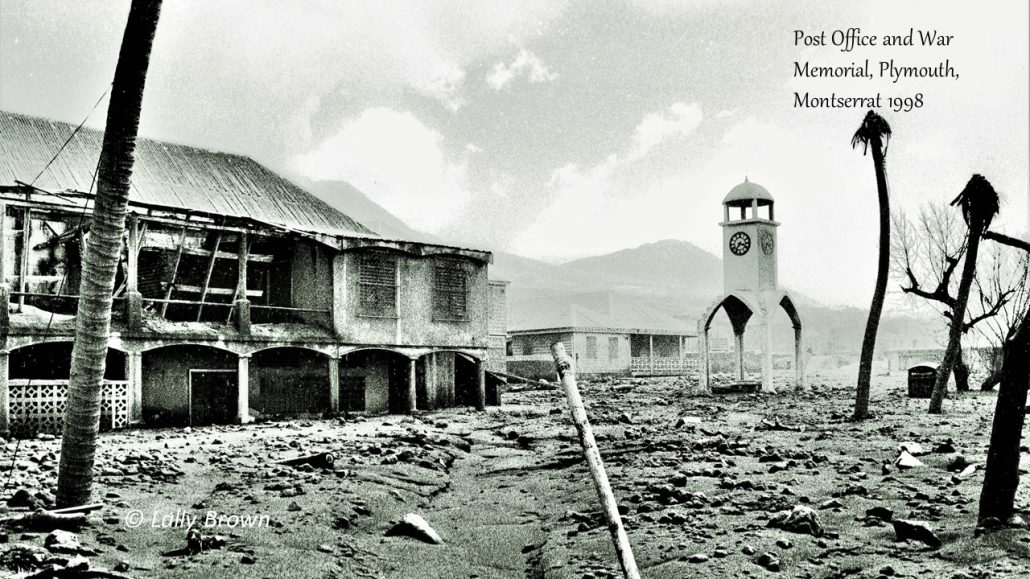 Lateral blast December 1997
Midnight on Christmas Day 1997 the MVO reported that hybrid earthquakes had merged into a near-continuous signal clipping the sides of the seismic drum. At 3am on Boxing Day there was a massive collapse of the dome. Approximately 55 million cubic metres of dome material shot down the flanks of the volcano into the sea. Travelling at speeds of 250-300 km per hour it took less than a minute to slice a 7 km wide arc of devastation across southern Montserrat. The evacuated villages of Patrick’s and O’Garros were blasted out of existence. A delta 2 km wide spilled into the sea causing a small tsunami. 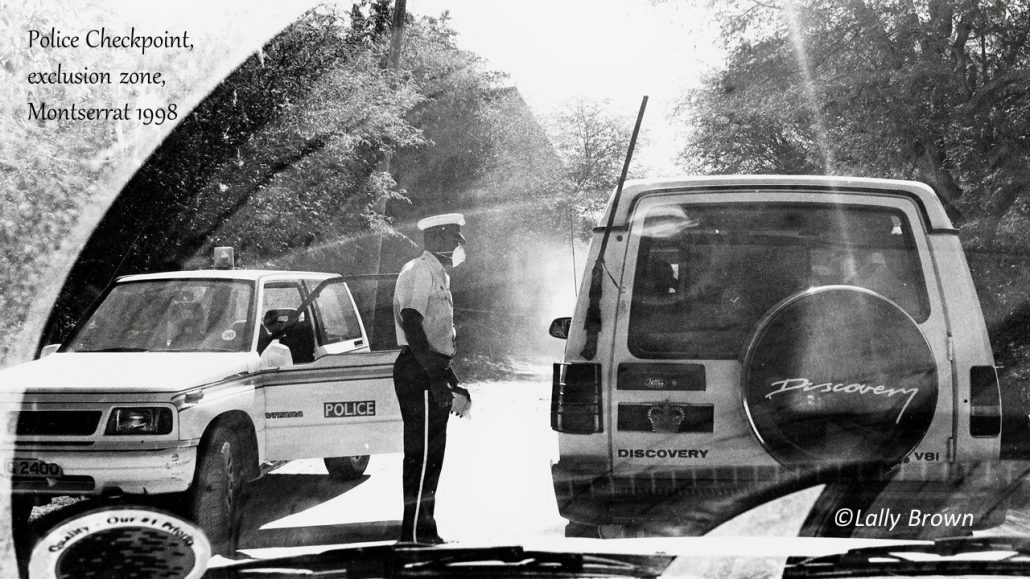 March 1999
After a year of apparent inactivity at the volcano the Scientists declared the risk to populated areas had fallen to levels of other Caribbean islands with dormant volcanoes. Arrangements were made to encourage overseas residents to return. Plans were put in place to reopen the abandoned airport.

2000 to 2003
One year after the volcano had been declared dormant there was a massive collapse of the dome, blamed on heavy rainfall.

In July 2001 another massive collapse of the dome described as ‘a significant eruption’ caused airports on neighbouring Caribbean islands to close temporarily due to the heavy ashfall they experienced. A Maritime Exclusion Zone was introduced around Montserrat and access to Plymouth and the airport prohibited.

Soufrière Hills volcano was now described as a ‘persistently active volcano’ that could continue for 10, 20 or 30 years. (ie possibly to 2032).

In July 2003 ‘the worst eruption to date’ took place, starting at 8 pm 12th July and continuing without pause until 4 am morning of 13th July. Over 100 metres in height disappeared from the mountain overnight. It was the largest historical dome collapse since activity began in July 1995.

A period of relative quiet followed.

2006
The second largest dome collapse took place with an ash cloud reaching a record 55,000 metres into the air. Mudflows down the flanks of the Soufrière Hills was extensive and tsunamis were reported on the islands of Guadeloupe and Antigua.

Another period of relative quiet followed. 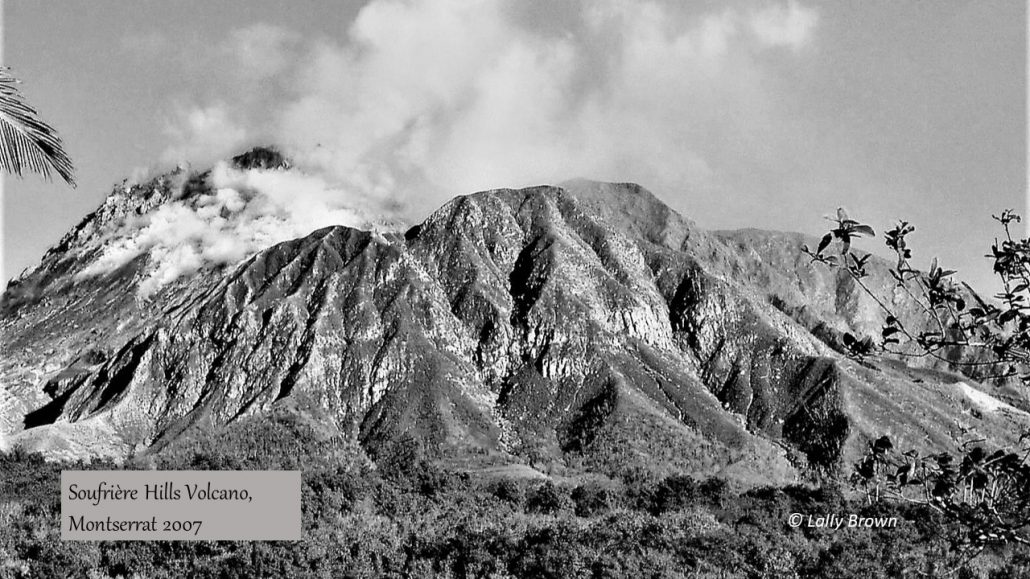 2010
Another partial dome collapse with pyroclastic flows reaching 400 metres into the sea and burying the old abandoned airport. There was extensive ashfall on neighbouring islands.

Again followed by a period of relative quiet.

2018
Although the Soufrière Hills volcano is described as ‘active’ it is currently relatively quiet. It is closely monitored by a team at the Montserrat Volcano Observatory (MVO). They advise the Government and residents on the state of the volcano.

Negative effects of the volcano:

·       Fertile farming land in the south in exclusion zone and buried under ash;

·       Concern over long term health problems due to ash;

·       Relocation to the north of Montserrat by residents from the south.

·       New airport built (but can only accommodate small planes);

·       Businesses opening up in the north of the island;

If you are interested in reading a dramatic eyewitness account of life with this unpredictable and dangerous volcano then the book ‘THE VOLCANO, MONTSERRAT AND ME’ by Lally Brown is highly recommended. You can order a paper back or Kindle version on Amazon.

“As time moves on and memories fade, this unique, compelling book will serve as an important and accurate first-hand record of traumatic events, faithfully and sensitively recounted by Lally Brown.”