Please consider donating to the New Zealand Red Cross Pacific Tsunami appeal to support those affected by the recent eruption of the Hunga Tonga-Hunga Ha’apai volcano.

This page continues to be updated as news breaks.

The Hunga Tonga-Hunga Ha’apai volcano is located in the South Pacific, around 65km (40 miles) north of Tonga’s capital, Nuku’alofa. The volcano is part of an arc of volcanic islands known as the Tonga-Kermadec Islands volcanic arc and forms part of the Pacific Ring of Fire. 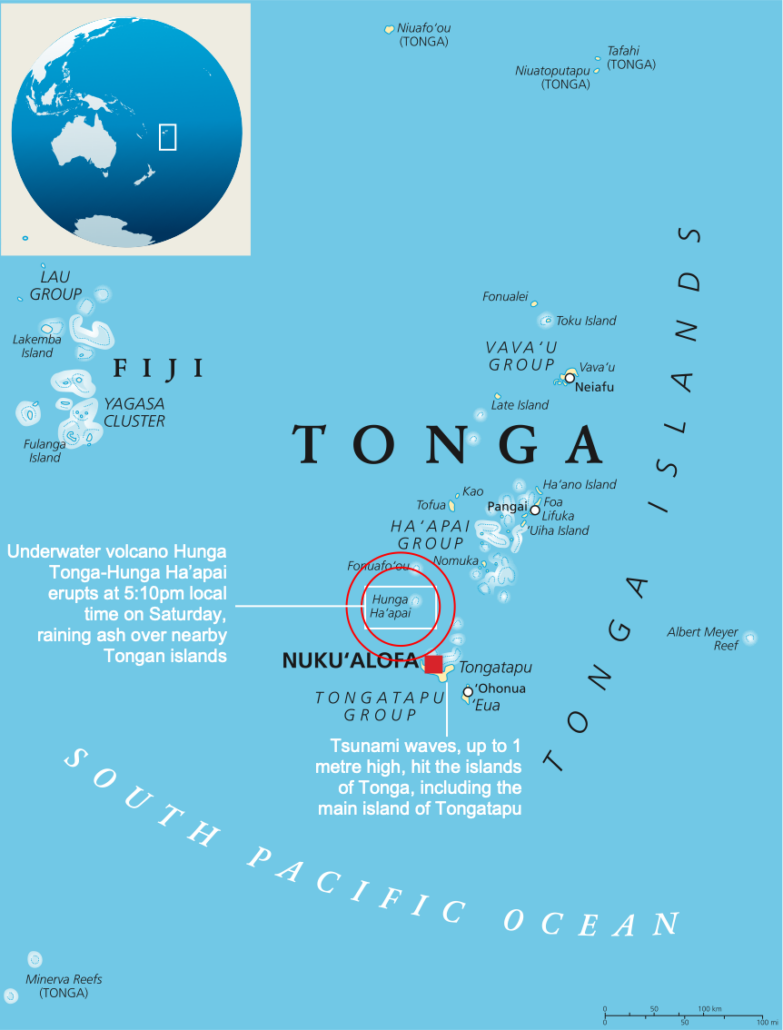 The location of the Hunga Tonga-Hunga Ha’apai volcano

Before its eruption, the Hunga Tonga-Hunga Ha’apai volcano was 1.8km high and 20km wide. However, the volcano was only 114 metres above sea level at its highest point. The video below illustrates the majority of the volcano is undersea (shared by A Hamill).

Volcanic activity in 2009 joined the islands of Hunga Tonga and Hunga Ha’apai, which were themselves produced by older volcanic eruptions. 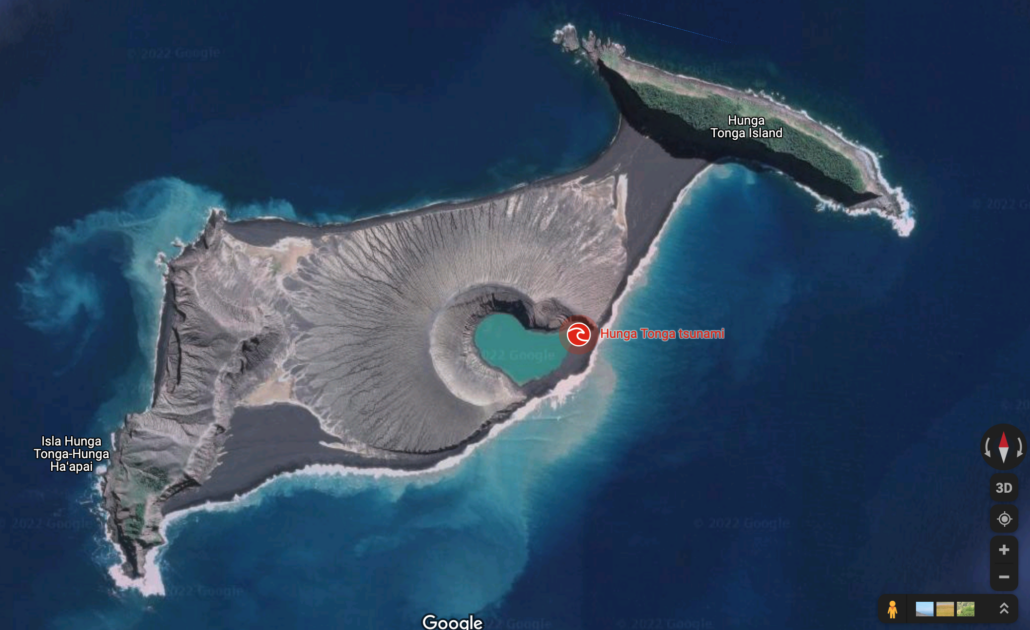 The satellite image above was taken before the eruption of the Hunga Tonga-Hunga Ha’apai volcano.

The volcano became active on 20th December 2021. However, it was declared dormant by the Tonga Geological Service on 11th January 2022.

The video below shows the eruption of the Hunga Tonga-Hunga Ha’apai volcano on 14th January 2022.

The eruption on 13th January was followed by a more significant, more explosive event at 5.15 pm local time on 15th January. The explosion generated enormous energy and created an umbrella cloud of ash, spreading the plume concentrically outwards instead of being dispersed in one direction by the wind. It was the most powerful eruption of the volcano since 1100 AD. The eruption was so loud it could be heard in New Zealand, some 2,383km (1,481 miles) from Tonga.

The initial height of the ash plume is an estimated 15.2km in altitude, later rising up to 30km high. The plume then spread to 260km in diameter before being distorted by wind. The graphic below provides a sense of the scale of the eruption.

Why did the eruption occur?

Tonga’s volcanic islands are located on a destructive plate margin where the Pacific Plate meets the Australian Plate. 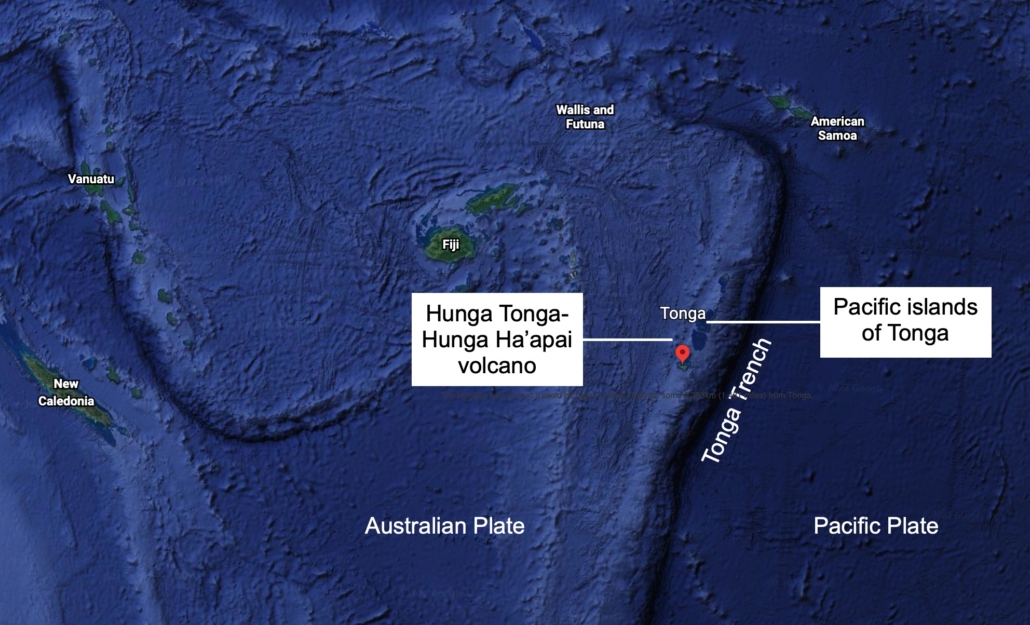 The seismic tomography scan of the mantle below shows the Pacific Plate subducting below the Australian Plate. The water brought down by the slab is forced into the mantle above, producing the magma which forms the volcanic islands. 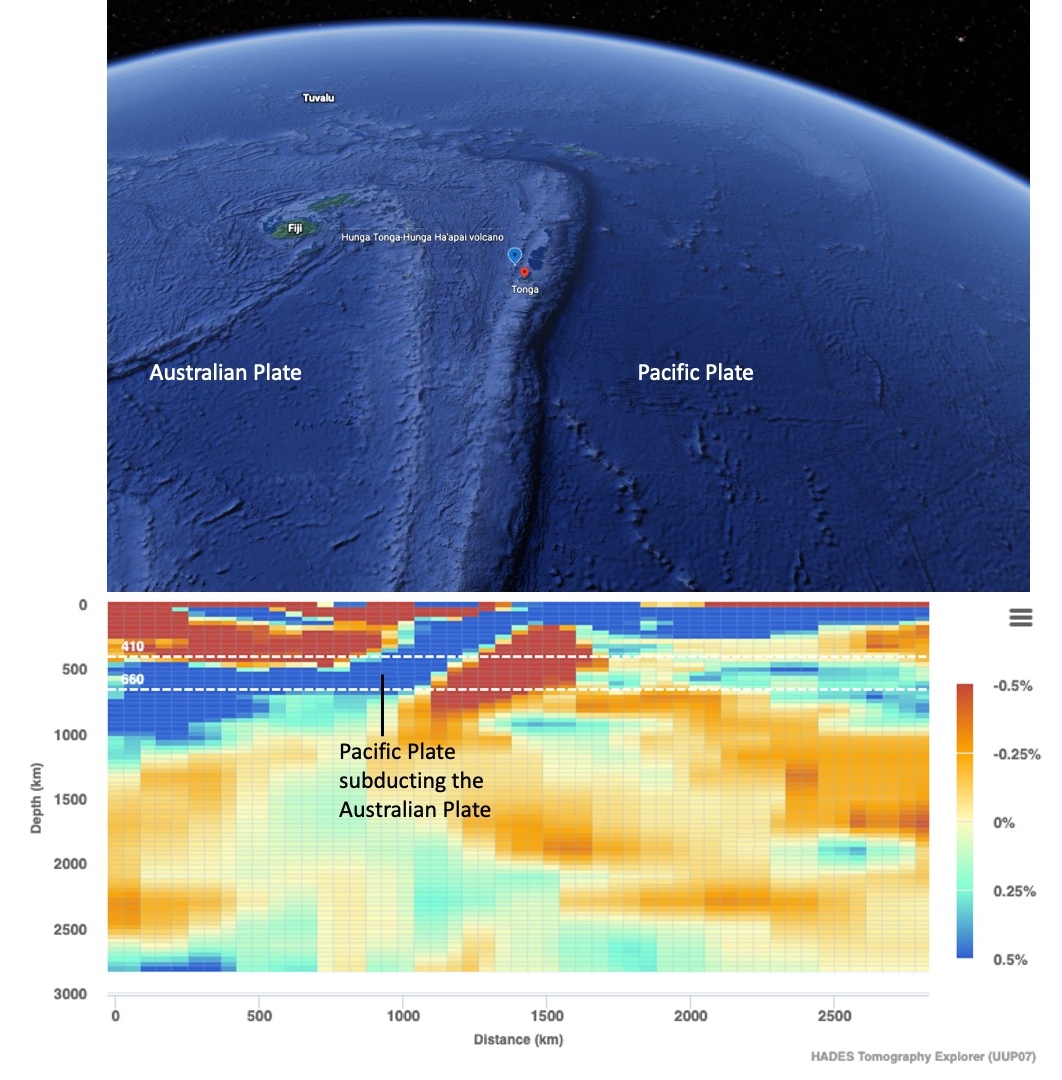 Why was the eruption so powerful?

The graphic below provides an overview of why the eruption could have been so powerful. 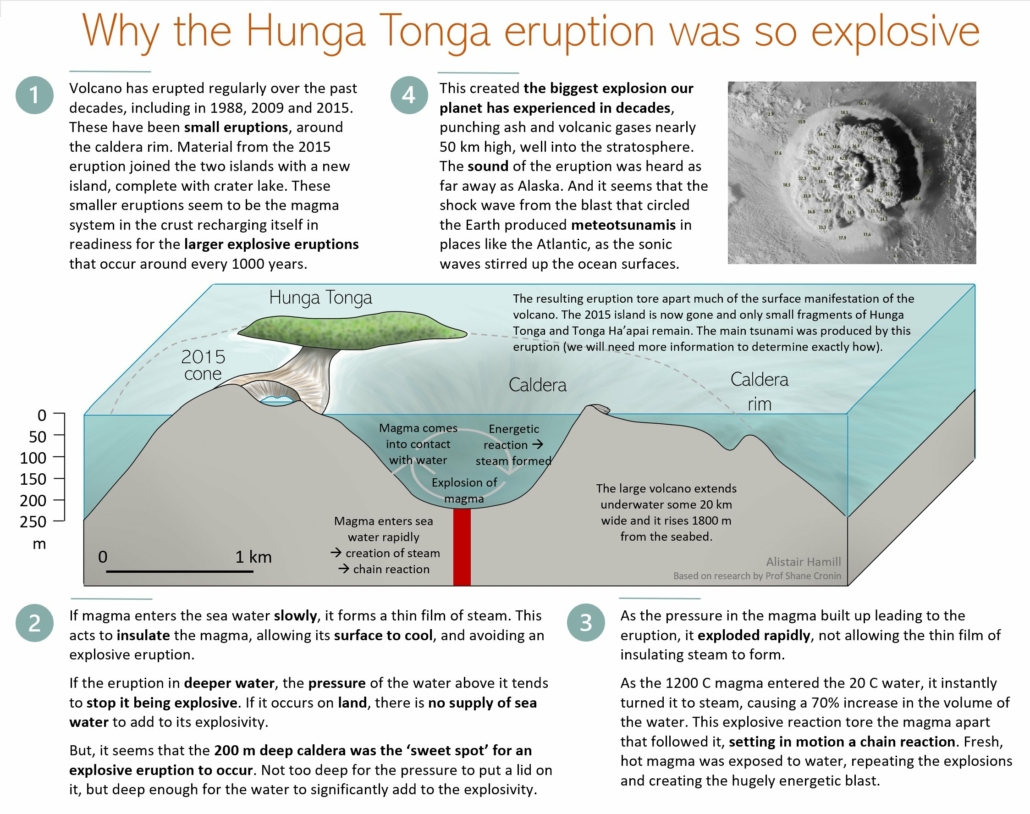 Why was the eruption of The Hunga Tonga-Hunga Ha’apai volcano so powerful? Source: Alistair Hamill, reproduced under a CC 3.0 licence with kind permission.

What were the effects of the eruption?

Following the eruption, people fled their homes and streets, and buildings flooded as tsunami waves crashed into Tonga’s main island of Tongatapu.

Twenty minutes after the eruption, a 1.2-metre tsunami wave is observed at Nuku’alofa, Tonga’s capital, according to the Australian Bureau of Meteorology. Waves reaching up to 15 metres (49 feet) hit the outer Ha’apia island group, destroying all the houses on the island of Mango, as well as the west coast of Tonga’s main island, Tongatapu, where 56 houses were destroyed or seriously damaged, the prime minister’s office said. People were evacuated from these islands.

Tsunami videos out of Tonga 🇹🇴 this afternoon following the Volcano Eruption. pic.twitter.com/JTIcEdbpGe

Photos and videos emerged on social media of large waves flooding coastal areas, with reports of people making their way inland and to higher ground. Footage shows waves causing damage to buildings and infrastructure such as seawalls.

Experts believe the tsunami activity could have been triggered either by shock waves propagating through water or by a landslide on the undersea part of the volcano. The cause is currently unknown and may rely on sea bed monitoring to identify the cause.

A convoy of police and military troops evacuated King Tupou VI from his palace near the shore, and local news site Kaniva Tonga reported long lines of traffic as thousands of people attempted to reach higher ground across the main island.

By evening in the Pacific, the volcano is raining ash and tiny pebbles on neighbouring Tongan islands, with reports of darkness blanketing the sky.

Many residents slept in schools and churches.

Nuku’alofa was covered in a thick film of volcanic dust. As a result, there were concerns about contamination of food and water supplies and acid rain.

In addition to preventing aircraft from flying, ash hampers recovery efforts because it “buries gardens and impacts plants with consequences for food supply, and is likely to contaminate water supplies,” volcanologist Dr Chris Firth says.

The Pacific nation’s main undersea communication cable linking Tonga to Fiji was damaged. Unfortunately, it may be weeks before the cable can be repaired due to difficulty getting the repair ship from Papua New Guinea to Tonga and safety concerns for the ship’s crew, who would be operating in waters not far from the volcano. As a result, Tongans around the world may be forced to wait weeks for regular contact to resume.

An air pressure surge from the volcano’s eruption was recorded at seismic stations internationally, including in New Zealand, Australia, the US, and the UK, where two shockwaves are observed.

Aerial photographs were taken onboard a monitoring flight by the New Zealand defence force on Monday 17th January show some areas blanketed with ash, with damaged buildings, while others show parts of the country that appear unscathed.

In the hours following the eruption, tsunami warnings were issued across the Pacific, including in New Zealand, Australia, the west coast of the US, and Japan, where around 230,000 people across eight prefectures were ordered to evacuate.

According to the government, at least three people lost their lives in Tonga. In a statement, the government confirmed three deaths: two locals and a British national.

Two people drowned off a beach in the Lambayeque region of Peru after unusually high waves were recorded there. The country closes 22 ports as a precaution. The Californian city of Santa Cruz was hit by a tidal surge, damaging boats and flooding.

The eruption of a Tonga volcano sent ‘violent’ waves across the Pacific.

Six thousand barrels of oil were spilt into the ocean when the tsunami hit a boat loading oil at a refinery off the coast of Peru. The spill happened in an area rich in marine life such as seabirds, sea lions and otters.

Homes in the Tongan capital, Nuku’alofa, have their own water supply tanks, but most of them were filled with ash, so the water was not safe for drinking.

The United Nations said that about 84,000 people, more than 80% of the population, had been badly affected by the disaster. “They have been affected through loss of houses, loss of communication, what we understand is the issue with the water,” UN spokesperson Stephane Dujarric told reporters. “Water is really the biggest life-saving issue. Water sources have been polluted, water systems are down.”

Tongan man, Lisala Folau, climbed a tree on his home island before being washed away and eventually managing to reach the capital Nuku’alofa. Lisala was washed away by the tsunami and drifted and swam between islands for more than 24 hours.

What were the immediate responses to the eruption?

The Fijian government issued a tsunami warning, telling people in coastal parts to move to higher ground due to “larger than usual waves”. There were reports that some Fijian villages were inundated with water and families evacuated.

In Australia, Japan, Hawaii, Alaska and along the US Pacific coast, residents were asked to move away from the coastline to higher ground and pay attention to specific instructions from their local emergency management officials, said Dave Snider, tsunami warning coordinator for the National Tsunami Warning Center in Palmer, Alaska.

Australia’s Bureau of Meteorology issued an evacuation order for Lord Howe Island and warnings for a huge stretch of the mainland’s east coast. Sydney’s Bondi Beach was evacuated overnight, and a marine threat warning remained in place on Sunday morning Australian time.

The Australian defence force sent a surveillance plane on Monday 17th January 2022 to assess damage to critical infrastructure such as roads, ports and power lines.

There was little damage to the Fua’amotu International Airport’s south-eastern runway, but it was unserviceable following the eruption due to ash covering the runway. An operation to clear ash from the runway was underway, with vehicles and people visible from monitoring aircraft flown by New Zealand’s defence force. After the ash descended on Tonga, young men from villages surrounding the capital travelled to the airport to manually clear runways in order to make way for foreign aid planes

The first aid flight arrived on Thursday 20th January. A New Zealand Defence Force plane landed following what Rear Admiral Jim Gilmour, commander of Joint Forces New Zealand, said was a “mammoth effort” to clear ash from the runway of Tonga’s international airport by hand. A strict no-contact protocol was adhered to as aid supplies were unloaded to reduce the risk of a Covid outbreak. Dubbed, contactless aid, emergency provisions are being sent in but personnel are not and strict Covid protocols are followed on delivery. Two years after the global pandemic began, Tonga is one of the few nations to remain Covid-free and has kept its borders shut to keep out the virus.

The HMNZS Wellington arrived on Thursday 20th January to survey the harbour to ensure its safety ahead of the arrival of the larger HMNZS​ Aotearoa on Friday, which is carrying supplies including 250,000 litres of water and a desalination plant.

Australia sent an air force plane that also arrived on Thursday 20th January loaded with essential supplies, including protective equipment and shelter materials. The government said it expected to send a naval vessel loaded with equipment, including helicopters, later on, Thursday or Friday.

On 20th January January 2022, a state of emergency was declared in the country until 13th February, the Tongan government announced.

Telephone links between Tonga and the rest of the world were also partially restored on Thursday 20th January, though restoring full internet connectivity is likely to take a month or more, according to the owner of the archipelago’s sole subsea communications cable. The country re-established some connections with the help of 2G internet and satellite telephone links.

Isolated communities on Tonga’s islands had to fend for themselves in the immediate aftermath of the eruption and tsunami.

What were the long-term responses to the eruption?

The submarine internet cable connecting Tonga to the rest of the world was repaired five weeks after the eruption.

Why the volcanic eruption in Tonga was so violent, and what to expect next – The Conversation

The ‘perfect’ depth for a destructive eruption – BBC Inside Science Podcast

Tonga eruption: How its impact spread so widely and violently – BBC News