We’re really pleased that guest blogger, Abdurrahman Pérez (@mr_perez5), is back discussing his strategies for encouraging students to develop their answers to geographical questions further.

My biggest takeaway having finished my second year in the classroom was how often I was finding students were leaving arguments/points half-done, undeveloped and leaving me asking “so?”, “and?” or “why?”. I was writing these three questions on student work so often I thought I had to do something about it. So much was it a worry for me that when I finally put up the display on it (which I’ll get back to later), I began every lesson introducing it, telling all my classes where the display was, why I had made it and how they could use it. My thoughts on being honest with pupils are perhaps for another time, but I cannot overstate its importance – why let them be mind-readers? Tell them what you want from, why you do what you, why you’re approaching a lesson a certain way, etc… Anyway, that’s for another time!

The AQA mark schemes want “developed” responses, so does Edexcel (as well as “logical connections”) and Eduqas call them “chains of reasoning”, a much better way of thinking about it, but my thoughts on why Eduqas is infinitely better than AQA and all the rest deserve a whole book, so I’ll leave it there!). Below you can see some AQA examples, which I decided to keep out of the final display as they are unnecessary and made it far less student-friendly. The urge to address this was further compounded when I recalled some of my Year 11s scripts from the summer exams and noticed how ‘highly-rated’ the approach of elaborating and explaining themselves my pupils had used to good effect was. (This would later be confirmed when I did some exam marking over the summer and noticed how successful candidates who properly developed their answers were. 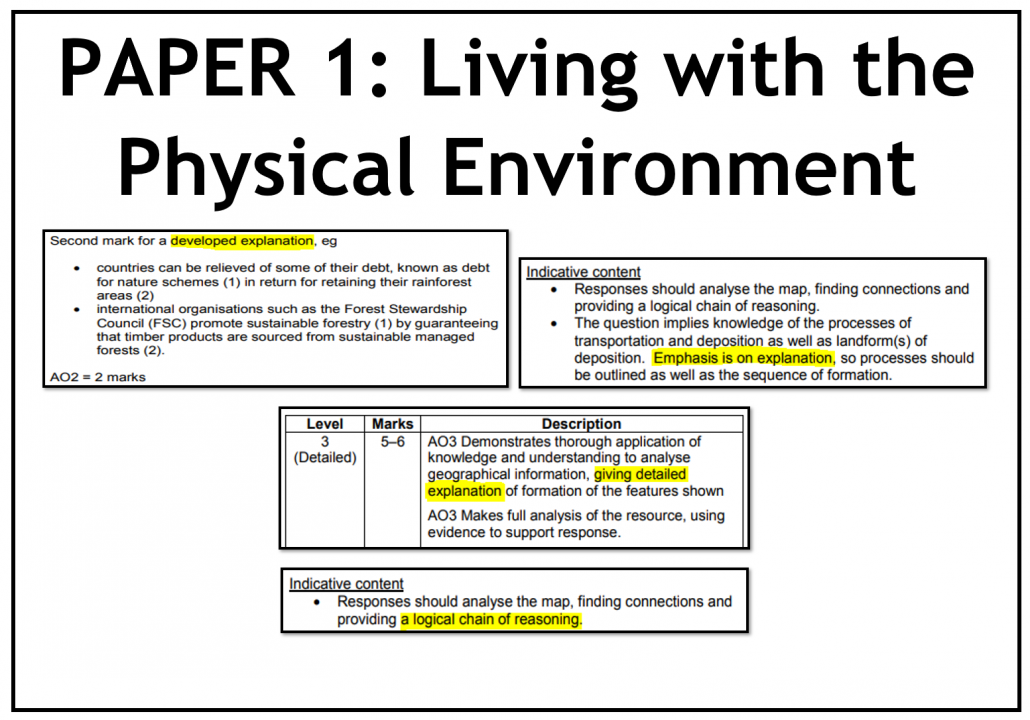 Paper 1 Living with the physical environment 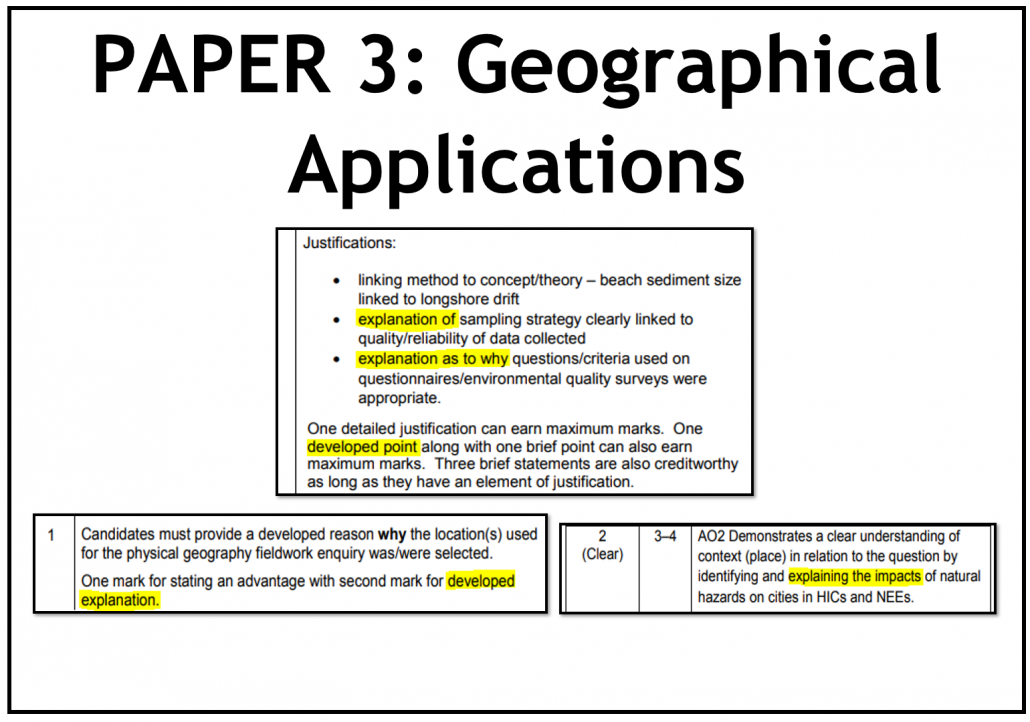 In my department, we start everything from KS3, not in the exam-factory sense, but more in a bid to get the right skills embedded by the time students get to Year 10 when we start our two-year GCSE. This means I wanted everyone to be elaborating and developing their points, from 7 set 5 to my Year 13s. In my opinion, this approach is totally applicable to all ages and abilities – in fact, my explanation of the display was no different with 17-year-olds than it was with 12-year-olds…

I call it “don’t put them full stop too early” – I want my pupils to elaborate on their evidence, explain their arguments or develop their points. This concept is at the heart of acronyms such as PEEL, PEDaL, etc, so chances are you are aiming for it too. I don’t want: “heavy rainfall leads to flooding as it saturates the soil around a river” – I want “heavy rainfall leads to flooding as it saturates the soil around a river. This means that the soil is less likely to able to allow infiltration and as a result of this, surface runoff will increase and lead to flooding as river discharge increases beyond channel capacity.” Yes, the sentence is longer but now I know that the pupil knows their stuff and I expect this from Year 7s, mind. I tell my pupils that I know and trust they know their stuff (most of them at least!), they just need to prove it because I won’t assume anything when I’m marking their work or questioning them in class; for the older ones, I tell them to prove it to an examiner who has never met them. To help them do this, my pupils are presented with a number of stems. 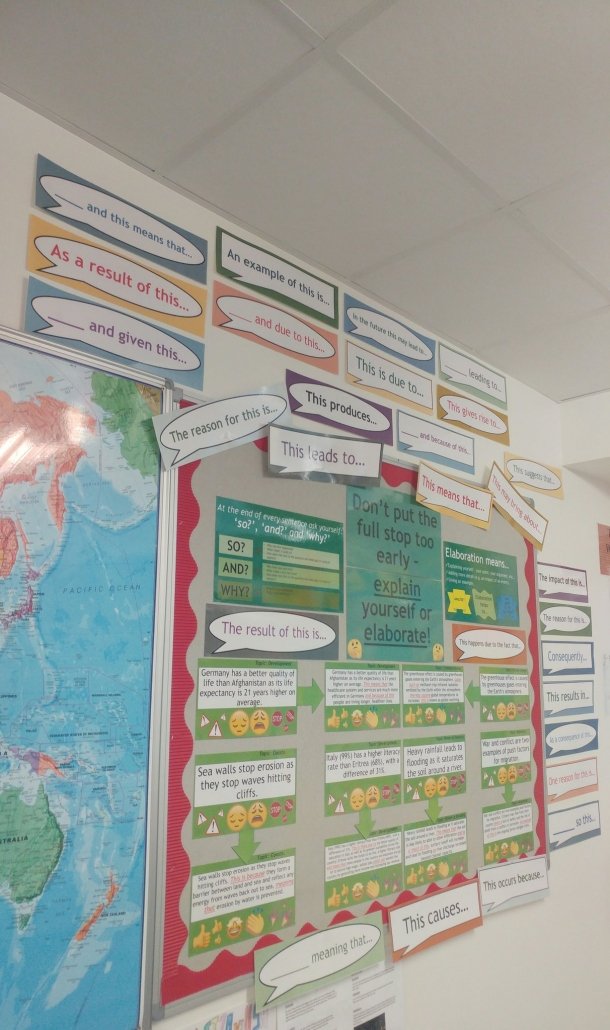 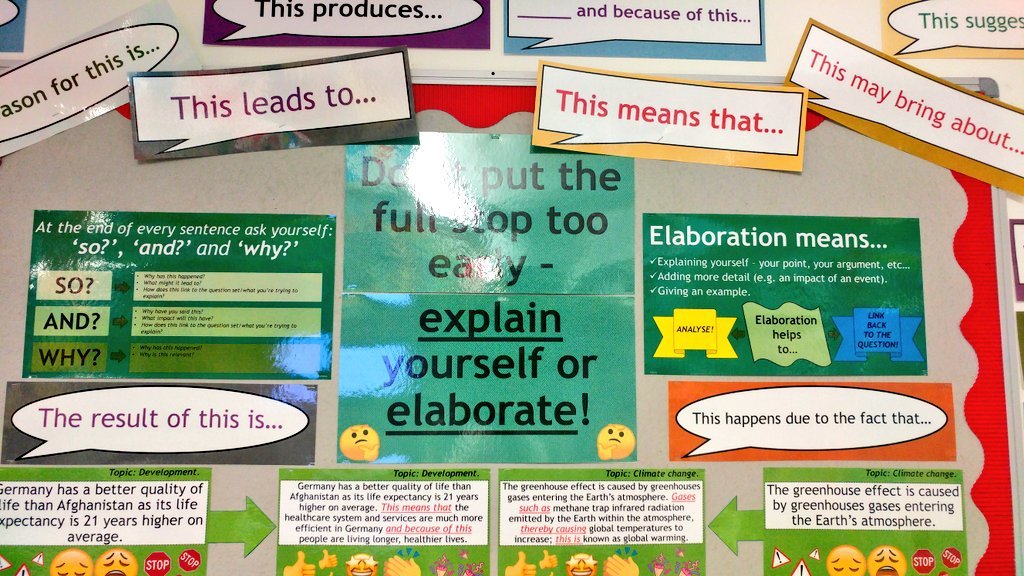 Explain yourself or elaborate 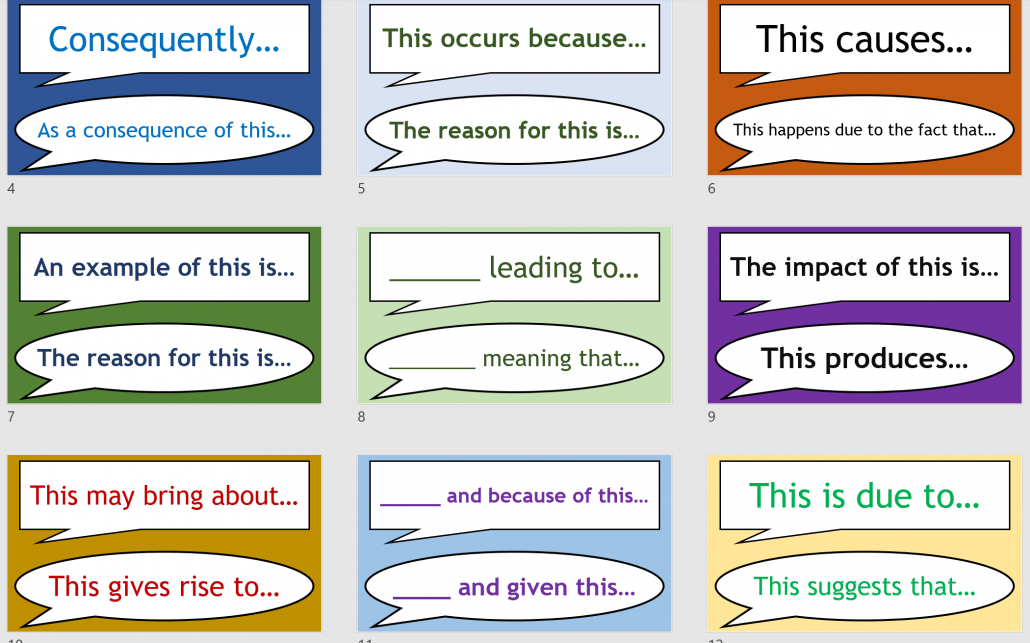 I am not interested in wading into the whole “what is the point of displays?” ‘debate’ that has cropped up on Twitter an annoying amount of times. Am I covering exactly 44.56% of my walls? I don’t know. Am I complying with fire-safety rules? I’m not sure…(?). Am I distracting pupils? I sure hope not…

What matters is that this display works with for me and I use it very often for the benefit of my pupils. That is all that does and will ever matter in the display debate. I am often directing students to its use and I encourage students to look at it whilst completing in-class extended writing (we call them Big Writes) and I even get them to use them whilst stretching their verbal responses to my question. For example, if a pupil has given me an answer and I want more from them, I will challenge them to turn around and use one of the stems to extend their answer. Or I might get another pupil to do this for them.

This led to some good results here and there – this year 9 pupil you can see is in the process of grasping it: 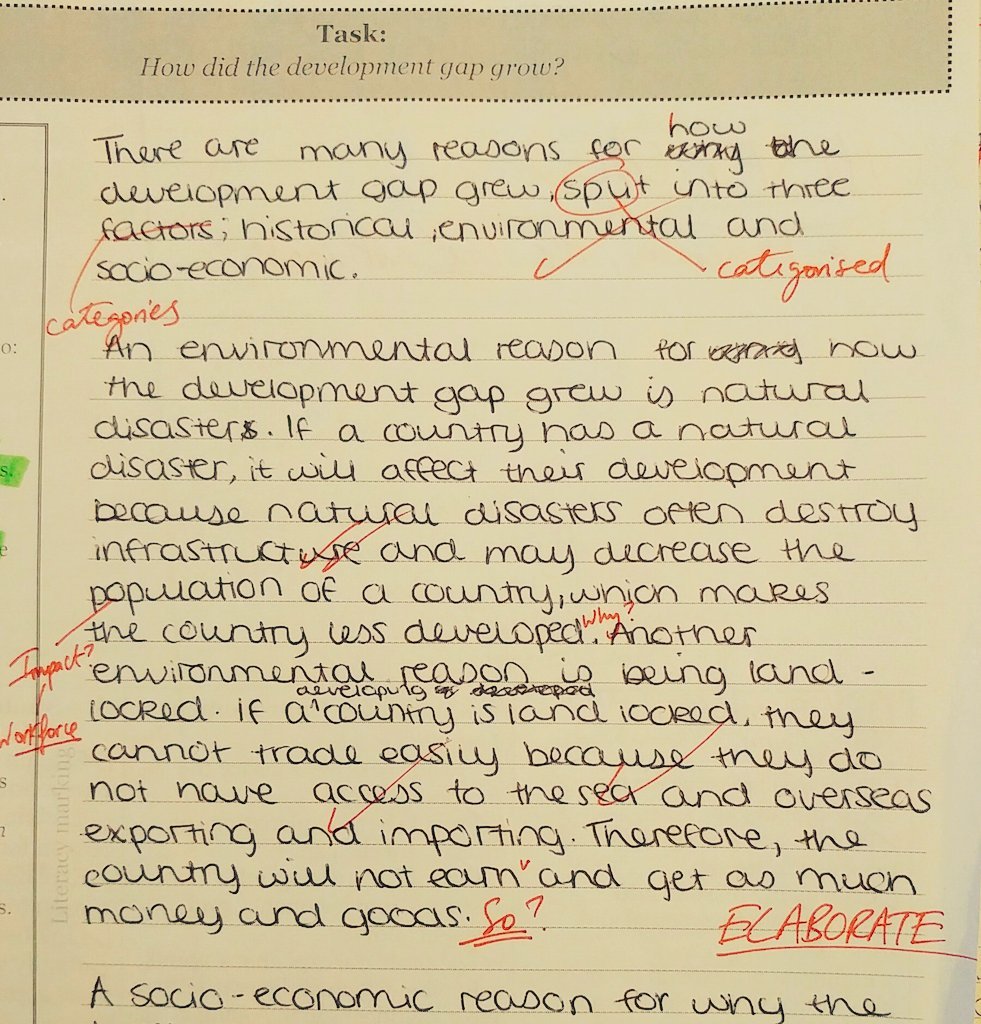 However, this is still a developing approach and is by no means embedded. I need to model it for pupils more often and maybe even the fact that the display is at the back of my class makes its use impractical. This is partly the reason why I have created laminated cards. Inspired by @missgeog92, these will be placed into the boxes I have on my desks which currently house the glues, scissors and dictionary, held together using some cheap binding rings from Amazon. 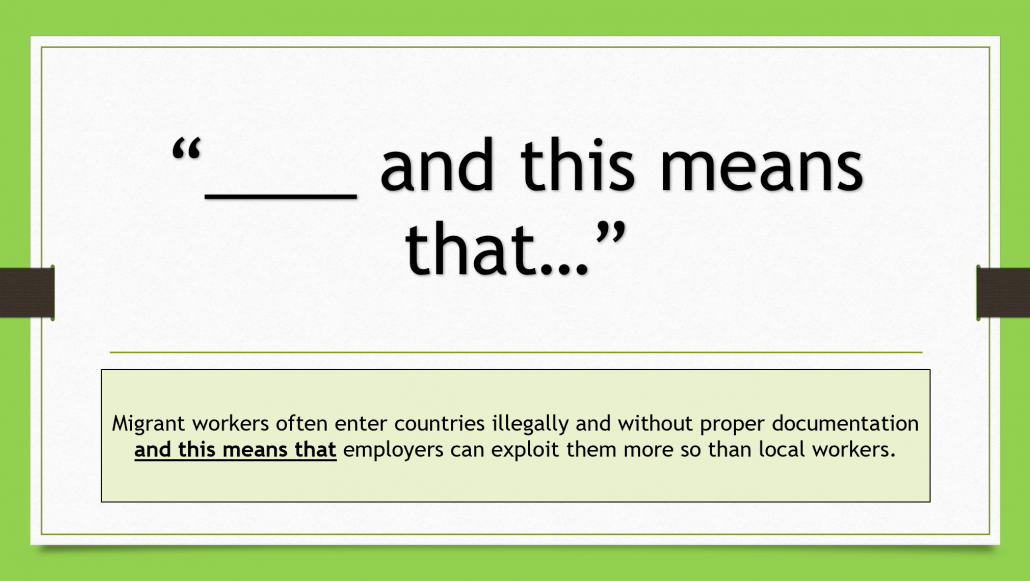 And this means that… 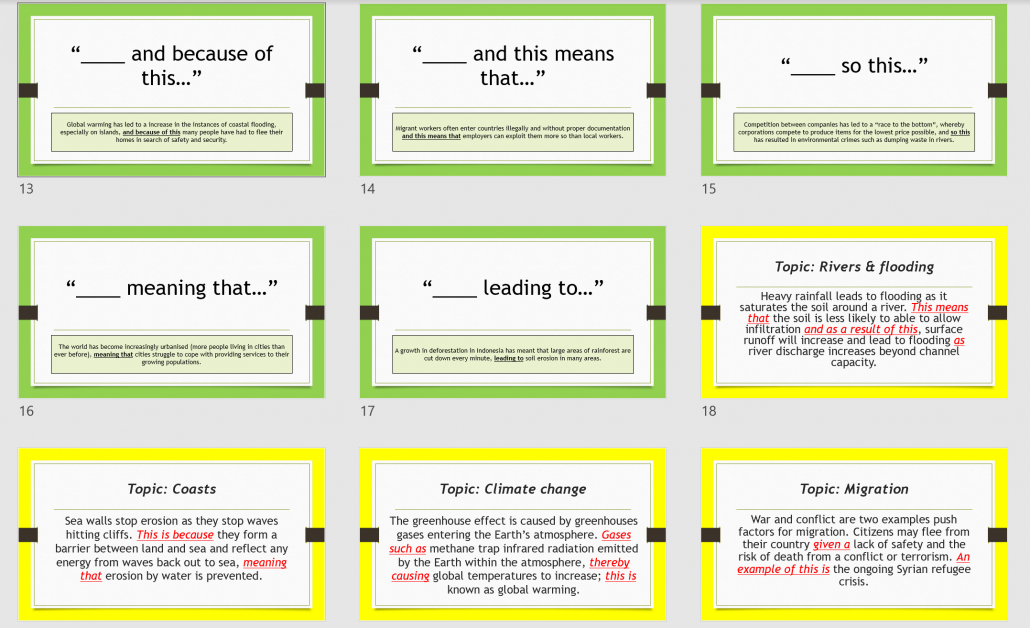 What matters really is how much I push them. I, and you if you decide to use them, cannot just hope pupils will diligently pick them up during a lesson and just use them. After all, how many of them use those nice laminated matts you put out every so often? Pupils need training and modelling, so that’s my task in September. Hopefully, if I do it often enough it’ll stick! It’s easy to want rapid results but you and I know that’s not how teaching works – it’s not how children (and their brains) work! To ‘convince’ them I have often used lots of written and verbal examples, I praise its use pupils and I often refer to the actual display in lessons, getting the whole class to turn and face it – much to the chagrin of moody teenagers! However, what I think really struck a chord with some – and to return to my point of being honest with students – is when I explained why they should use the display.

I told/tell them elaboration can mean: (1) explaining yourself – your point or your argument; (2) adding more detail (e.g. an impact of an event) or (3) giving an example. I tell them it can help to analyse (the A-Level lot love this) or a way to link back to the question (and the GCSE classes lap this up!). I ask them to ask themselves the very same questions I am left asking when I’ve read their work: So? And? Why? That’s when a lot of them ‘get it’.

I think we’re all trying to do this in some sort way – in fact, I initially thought this might be a good blog post because I saw @Geoisamazing’s brilliant “This means that…” resource recently on Twitter and it reminded me of what I had done/was planning to do. It is definitely a case of ‘slowly, slowly catchy monkey’ (very slowly with some pupils or classes), but it’s certainly worth sticking with. You’ll notice differences in oral responses as well written answers in time and that will mean you will have equipped your pupils with the tools to produce work you – but more importantly, they – can be very proud of! 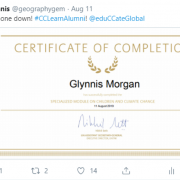 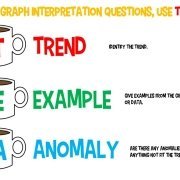 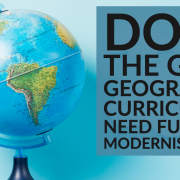 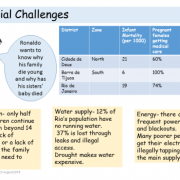 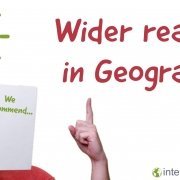 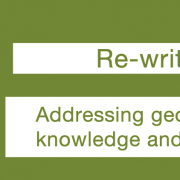